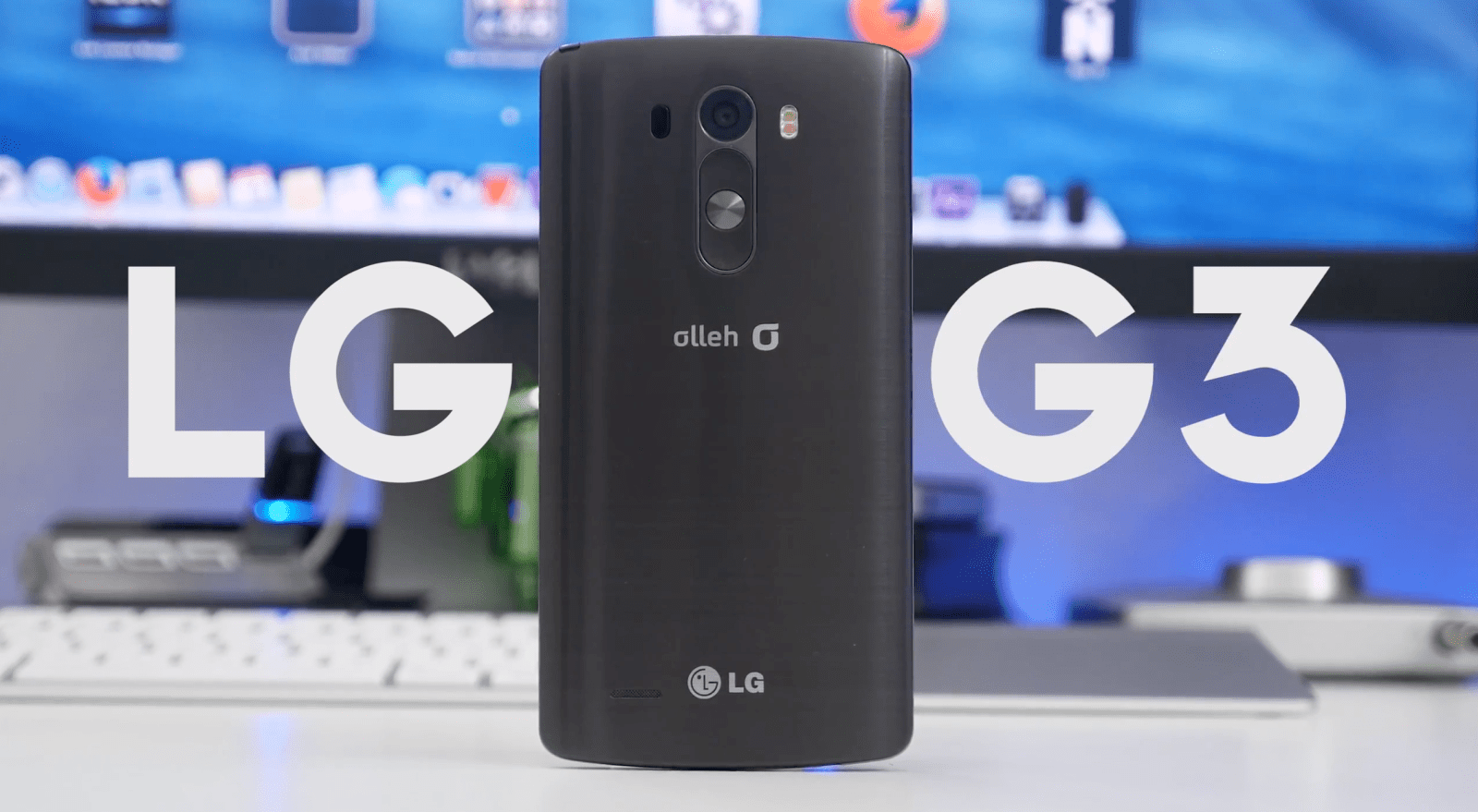 Taking a look at specifications, the LG G3 packs a quad-core 2.5GHz Snapdragon 801 processor, 3GB of RAM (32GB model) or 2GB of RAM (16GB model), a 3,000mAh battery, 16/32GB of internal storage, and a micro SD card slot that’s expandable up to 128GB. At its core, the G3 is a definite contender, but these specifications don’t make it much different from any other flagship devices we’ve seen this year.

At first glance, you may not realize that the G3 is made of plastic that’s designed to look like brushed metal. Trust me, I was fooled too by the polished marketing pictures that were leaked prior to the announcement. Don’t worry though, the G3 has a fantastic build quality.

Again, it’s plastic, but that’s not necessarily a bad thing as it still allows for a removable back cover and keeps the device solid and lightweight. The device’s slightly curved backing makes it very comfortable to hold and its compact form-factor does its best to preserve one-handed operation. Overall though, the G3 is a very sleek device.

The one spec that I deliberately failed to mention above is the 5.5-inch Quad HD display. The G3 has a 2,560 x 1,440 resolution display giving it 538 pixels per inch. Yes, LG has managed to cram that resolution into a small and vivid 5.5-inch panel surrounded by slim bezels and the result is absolutely beautiful, but is such a display necessary? Probably not. Sure, LG is now winning the resolution race, but there’s no direct benefit to consumers. When watching HD content, playing games, or browsing the web, you’re not doing so at the display’s native 1440p. Currently, you’re not going to find much (if any) mobile content that’s optimized to take advantage of this resolution. LG’s interface definitely looks crisp, but that’s where the Quad HD optimization ends.

Don’t get me wrong, this display is a beauty. It’s not as bright as I would like, but every inch looks as if the graphics were printed on top of a glass plate. To be honest though, I wouldn’t let the Quad HD display be the only reason you purchase a G3. We’re at least a year away (I’m being generous with this estimation) from this type of resolution being a standard on smartphones. LG is leading the pack, but it’s going to be a lonely walk for a little while. You’ll only ever notice a slight difference if you put the G3 alongside another smartphone with a lower resolution, but even then it’s only a small difference and really only when examining the optimized user interface because there’s nothing else in mobile equipped to handle this resolution yet. To reiterate, the display is beautiful, but at this point it’s just a spec sheet wow factor.

The G3 is running Android 4.4.2 KitKat and hopefully it will receive future updates in a timely matter. LG has revamped its Android skin this year leaving us with a flattened experience when compared to the G2. Not everyone will prefer the new look, but for myself it was a welcomed change. Maybe I’ve been conditioned to love flat design over time, but anything else just looks dated. Aside from the design, there are plenty of software feature to love. If you’re looking for customization, LG provides a lot of it. You’ll have the ability to change themes, fonts, rearrange navigation keys, and more. I never felt limited when it came to customization on the G3, and if anything there was more than I cared to tinker with. You’ll find LG’s flagship software features like QSlide apps, KnockOn, and the most recent addition Knock Code, which will allow you to unlock your device (even while the display is off) with a series of taps. Pretty cool stuff.

Like other large-display devices, you’ll find a dual-window mode which will let you take advantage of the space and launch two apps at once, but I never cared to use it. Also, LG has done a fantastic job at putting together a stock keyboard. I never felt the need to replace it with Play Store options like Google’s keyboard of SwiftKey. The keyboard is great. Plain and simple. For a closer look at the best software features on the LG G3, check out our video review above.

The G3’s 13-megapixel shooter features “Optical Image Stabilization+”, Laser Auto-Focus, a dual-LED flash, and is capable of recording up to UHD video quality. Overall, the camera is excellent, but there are a few things to complain about.

First off, the UHD video recording is just okay. It’s nothing to brag about, but it definitely gets the job done. Thanks to the OIS+, 4K video is buttery smooth and a much better alternative to the shaky and unstable UHD video that the Galaxy S5 offers. In low light, the stabilization gets a bit worse and there’s a ton of noise present in the video, but I don’t think anyone will be shooting any feature films with the G3, so I’m not going to complain about this too much. This camera takes beautiful pictures in almost any situation. The minimalistic camera interface will leave photography enthusiasts wanting more, but surprisingly “Auto Mode” works very well. You’ll find a few other modes such as panoramic, dual, and magic focus as well as a voice or hand gesture controlled shutter option.

LG’s new Laser Auto-Focus system is fantastic. It really makes the entire experience great. Focusing on just about anything is lightning fast and combined with the semi-intelligent auto mode, you’re almost guaranteed a useable photo each time. Pictures are sharp and vivid (gallery below), and combined with the Laser Auto-Focus, I’d say it’s one of the best cameras on a smartphone right now.

I was a little disappointed in the G3’s low light performance. In a dark area, the camera consistently over-exposed any lights in the background, and because there’s no manual controls available, there’s no way to prevent this issue. There are no settings for ISO, aperture, white balance, or anything else which makes it impossible to control the camera’s abilities, but technically this could be resolved with an update to the camera app so I’ll keep my fingers crossed. Check out the camera gallery below:

As far as I’m concerned, the G3 performed comparably with any other flagship on the market. I’m sure the 3GB of RAM in my 32GB review unit helped out a bit, but the quad-core 2.5GHz Snapdragon 801 processor is also hard at work behind the scenes. If you’re into benchmark scores, we’ve included them in the video review for comparison.

It’s hard to completely evaluate performance at the moment because our unit was an early Korean production model and some of the software seemed half-baked. Hopefully the US version will be polished a bit more, and we’ll be sure to update this review when we get our hands on one. When it comes to battery life, the G3 was a star performer. There weren’t any unexpected moments of panic that left me rushing to the nearest charger. I got around 8-10 hours out of the G3 with average to heavy use, but again this number may vary on US models as our Korean unit wasn’t optimized to run on US cellular networks, and again the software felt a bit incomplete in certain areas. I’m sure all of this will change once the device is available worldwide, but until then we won’t get into battery and software performance too much.

The LG G3 has a beautiful display (regardless of necessity or optimization), a fantastic camera, great performance/battery life, and if this is the smartphone starting point for LG in 2014, they are definitely winning the race at this point. I just hope we see a bit more software optimization and completion before the G3 is released in any other markets.

So at the end of the day, is the LG G3 worth your hard-earned dollars? With the information provided everyone will have a different answer to this question, but in my opinion, this the closest thing on the market to a no-compromise smartphone. Sure, there are little inconveniences here and there, but it’s hard to place judgement on every problem as this may not be exactly what we’ll see once the device is widely available. To keep it simple, I’m a fan. A big fan. Aside from a few hiccups along the way, I’ve enjoyed every second with the LG G3.