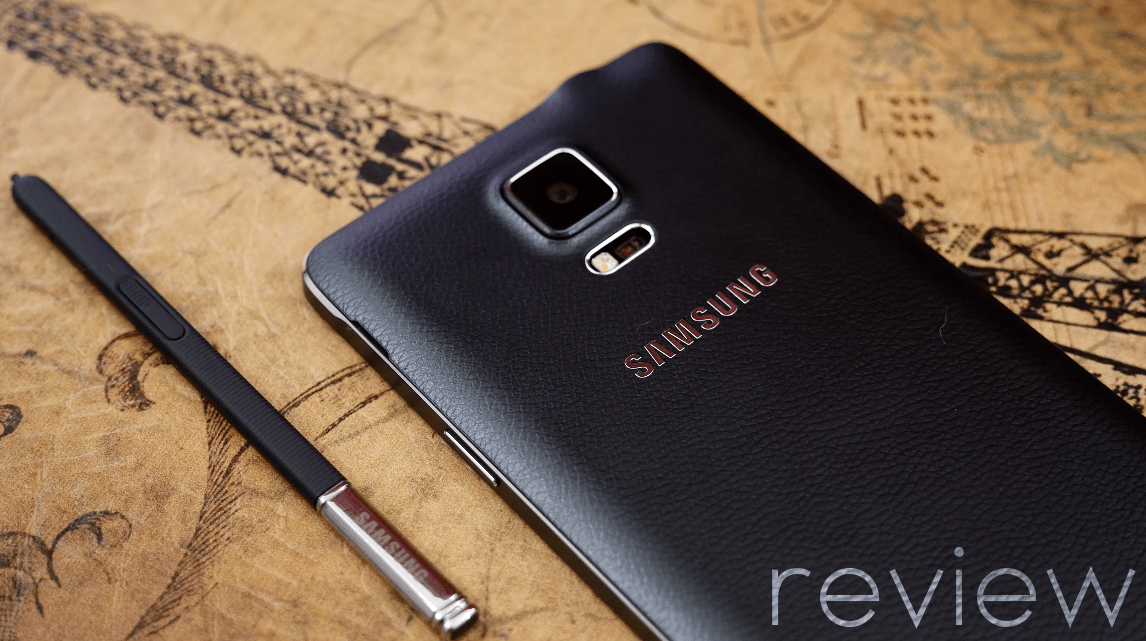 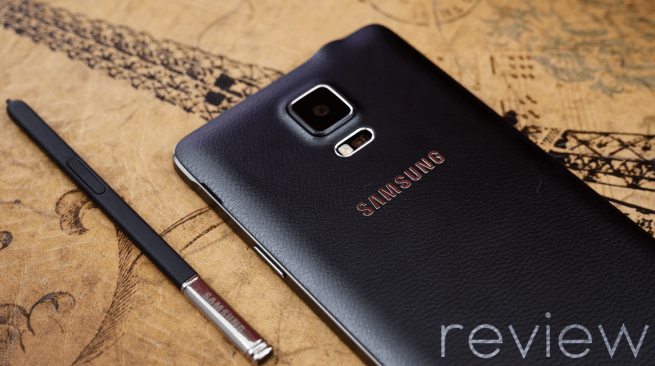 The industry’s most popular large screen smartphone is back again and better than ever, but will “better” be enough to call it your own? Today we’re getting into our full review of Samsung’s Galaxy Note 4 to find out if this phablet king can hold the throne.

Just prior to the Galaxy Note 4, we had the Galaxy Alpha. This was Samsung’s first attempt at a metal-framed smartphone and gave me an optimistic view on the future of its mobile devices. So as you can imagine, when the Galaxy Note 4 was announced, my optimism grew tenfold. Samsung is building things better, there’s no doubt about it…

I’m not saying that the plastic found on the Galaxy Note 3 is bad, but there’s definitely nothing wrong with a little metal here and there. This device is a mix of the past and present. While we have a solid metal frame supporting the Galaxy Note 4, there’s also a bit of plastic in the form of its back cover to hide the removable battery, Micro SIM, and Micro SD card slot.

The back cover still has familiar characteristics like the fake leather texture, but at least Samsung has given up on the artificial stitching that was found on the Note 3. This build quality makes a huge difference in your hands, but there’s much more than a metal frame that makes the Galaxy Note 4 a win for Samsung. If you’re curious to see how the Galaxy Note 4 stacks up against its predecessor, be sure to check out our ultimate comparison article.

First up, we have a gorgeous 5.7-inch QHD display. This pixel-packed beauty has a resolution of 2,560 x 1,440, coming in at 515 ppi. I was initially a huge fan of the QHD display on the LG G3, but the Galaxy Note 4 takes it one step further with Super AMOLED technology. The display is crisp and vivid with great contrast. It’s one of those things in life that cannot be unseen. The problem is, QHD doesn’t matter a lot in the grand scheme of things. It’s just one of those luxuries that’s available, but not yet mainstream from an app development and design perspective.

Check out our Galaxy Note 4 review video below:

Aside from the improved build quality and 5.7-inch QHD display, the Galaxy Note 4 is shipping with top of the line specifications including a quad-core Snapdragon 805 processor clocked at 2.7GHz (Exynos octa-core in some models), 3GB of RAM, an Adreno 420 GPU, and a 3,220 mAh battery. I’ve been reviewing the Exynos octa-core processor model over the past couple of weeks, but even with that everything is buttery smooth. The Snapdragon version may be slightly enhanced when it comes to processing power, but overall things have been great for me. 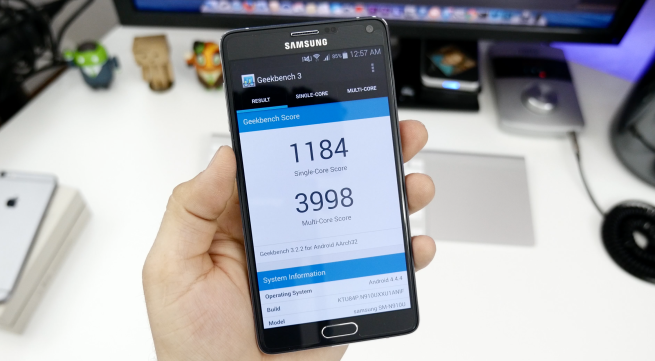 Samsung has also included a fingerprint sensor that’s built into the Galaxy Note 4’s home button. It seems to be a bit improved over the sensor found on the Galaxy S5, but it’s nothing I’ve ever cared to use. Along with that, we also have a heart rate sensor located on the back next to the LED flash and beneath its 16-megapixel camera.

Up to this point, I’ve almost pointed out everything that makes the Galaxy Note 4 better than its predecessor. There are software and S Pen enhancements, but the exterior’s quality and internal specifications may be enough change for some people.

One of the main reasons consumers purchase a Galaxy Note is because of its S Pen functionality. This wouldn’t be a Galaxy Note without the S Pen. Samsung has doubled the S Pen’s sensitivity which will be helpful for those looking for improved accuracy. Along with that, the Air Command menu has been simplified and a couple of new options have been added. Samsung has ditched S Finder and Pen Window options in the Air Command menu and reconfigured it to include Action Memo, Screen Write, Smart Select, and Image Clip. 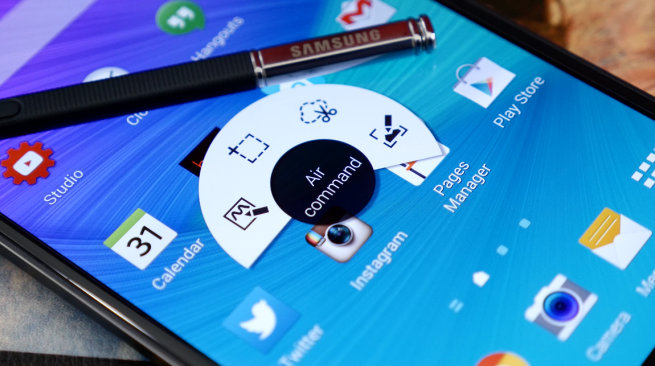 Out of these four options, I really only found two of them to be useful. Smart Select and Action Memo are the only two I ever found myself using on a regular basis. In fact, I hardly ever used Image Clip or Screen Write. In my opinion, Image Clip and Smart Select could be combined into one feature as they perform similar functions with the S Pen, but that would leave the Air Command menu a little empty.

Most of the time, I just didn’t find it to be quick or efficient to use the default Air Command options with the S Pen. Instead, I often found the little things the S Pen does to be useful. Selecting multiple items or text, hovering over the interface elements to uncover details, and turning my sloppy handwriting into useable information quickly made it to the top of my S Pen usage list. After a while, these small features become second nature and you’ll begin to wish every smartphone came with these simple innovations. 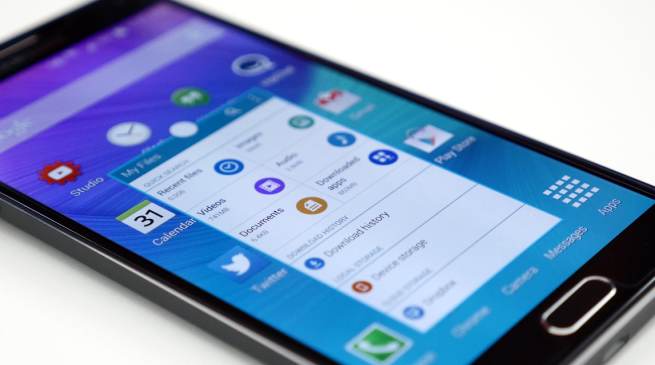 Samsung has expanded Multi-Window functionality to include pop-up app windows that can be ran simultaneously. These resizable windows can be minimized into little floating bubbles and pushed out of the way until they are needed again. I found myself using this feature quite often actually. Multi-Window still features the traditional split screen view and you can go back and forth between the two modes, but overall I’ve found Multi-Window’s new features to be very helpful.

I know a lot of people cringe at the sight of Samsung’s Android overlay TouchWiz, but it’s not all that bad. Things have been improving all around and it has become relatively responsive. Most everything is smooth, but don’t get me wrong, you’ll run into some lag here and there. Just like every other smartphone, the Galaxy Note 4 is not perfect. That being said, it is incredibly snappy most of the time. TouchWiz has also been redesigned to feature a modern look and feel and I’m a big fan of it.

Like previous iterations of TouchWiz, there’s seems to be a bit too much of everything tucked away in menus. As I’ve mentioned in the past, there’s something for everyone within TouchWiz, but it’s not always everything you’ll want or need. I think Samsung is refining TouchWiz in the right areas, but I’d like to see a little more simplicity in future releases. TouchWiz may have earned a bad reputation in the past, but in my opinion it’s far more exciting than stock Android.

I’ve mentioned this in previous Galaxy Note 4 coverage, but this camera is pretty incredible. The 16-megapixel sensor with optical image stabilization is nearly second to none. Pictures in acceptable lighting are absolutely beautiful. I’ve created a gallery containing some photos from the Galaxy Note 4 that you can check out below. The low-light performance does get a little rough at times, but overall this camera is a win for Samsung. 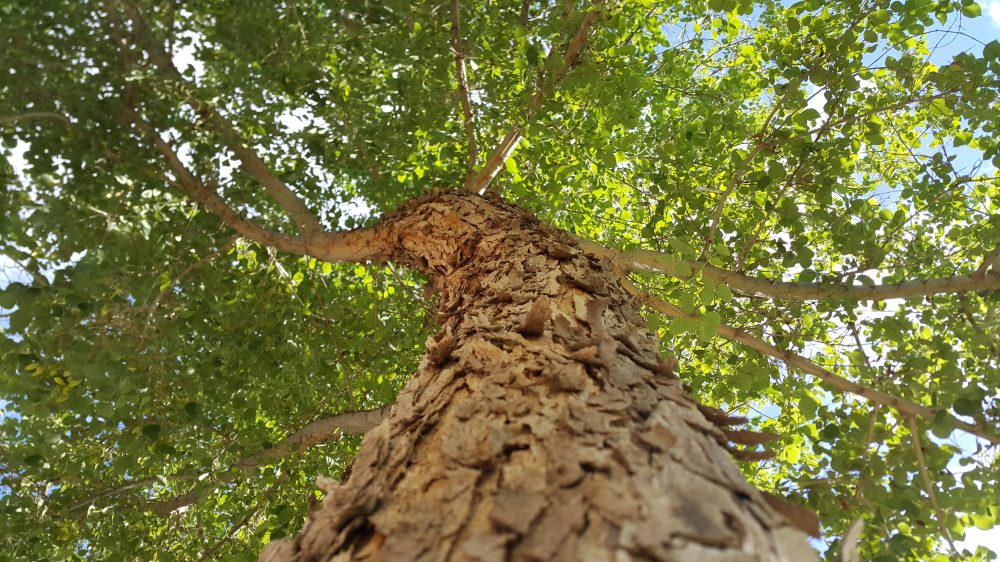 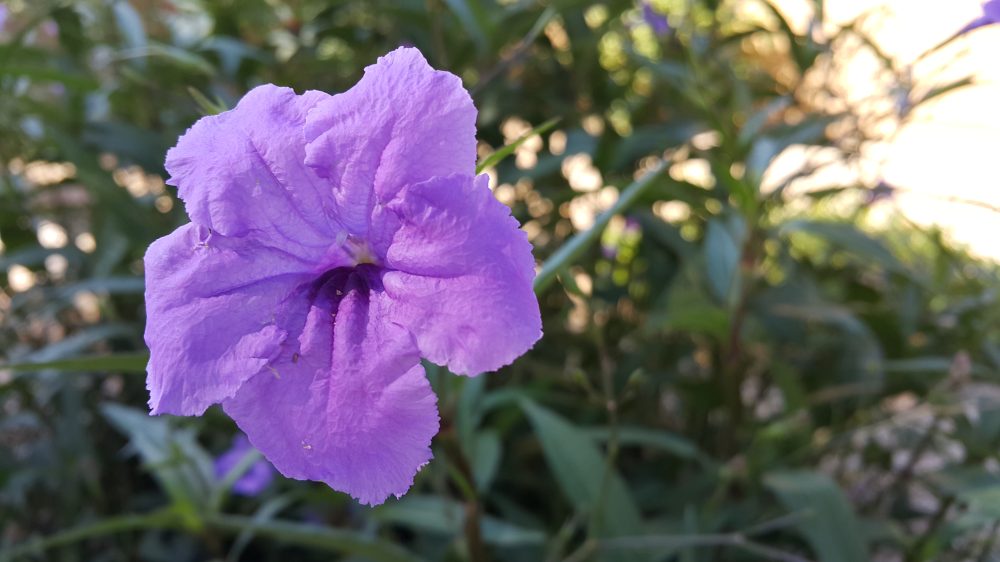 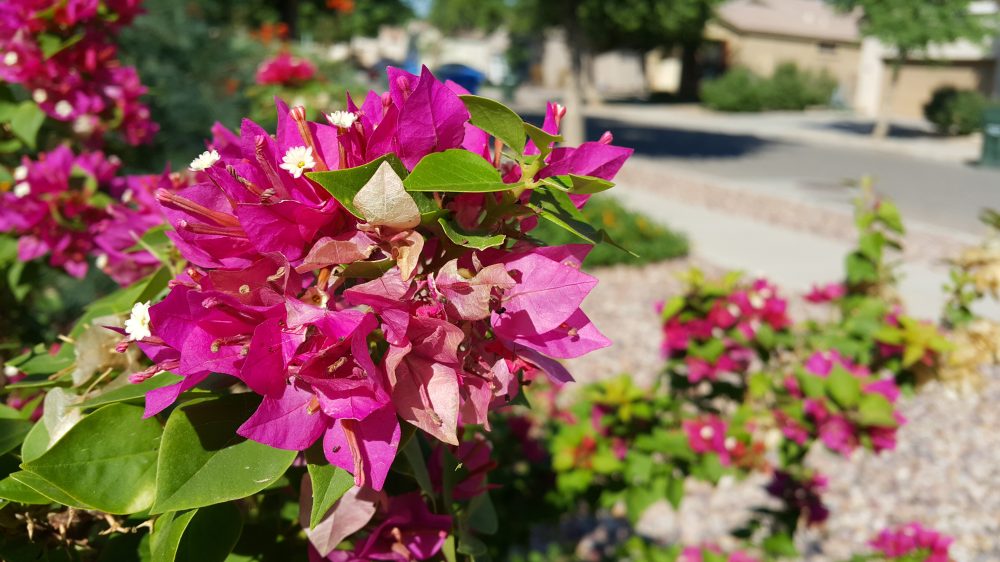 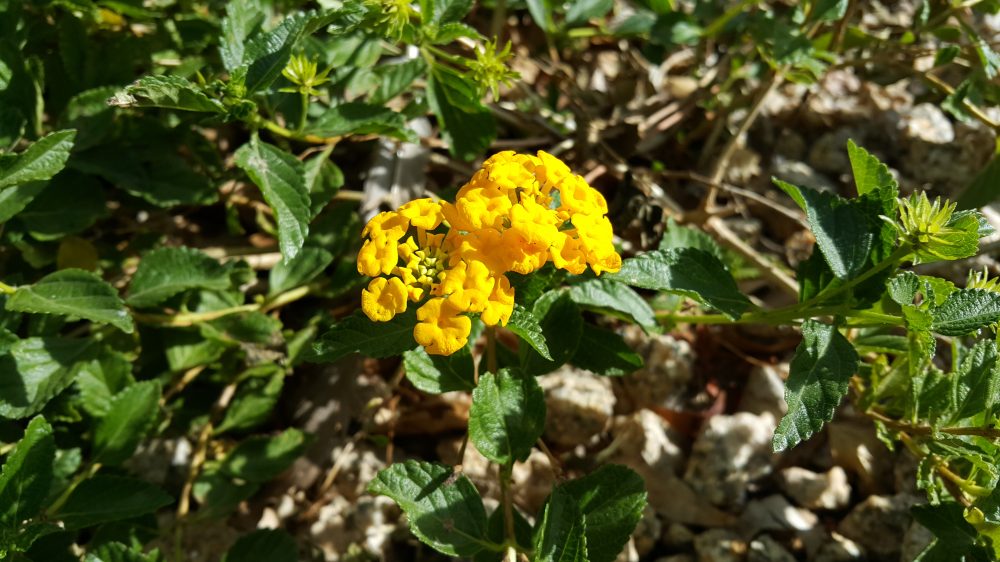 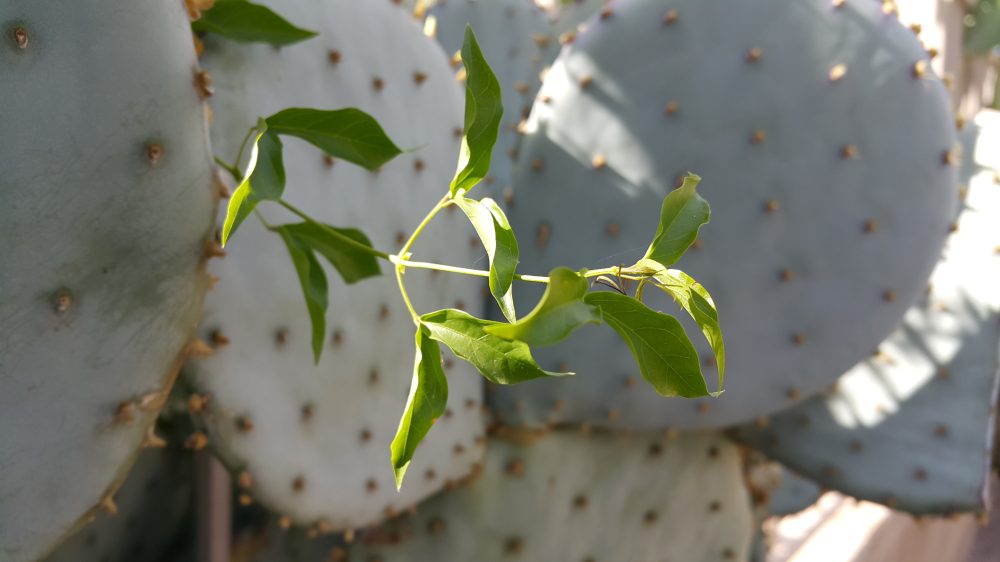 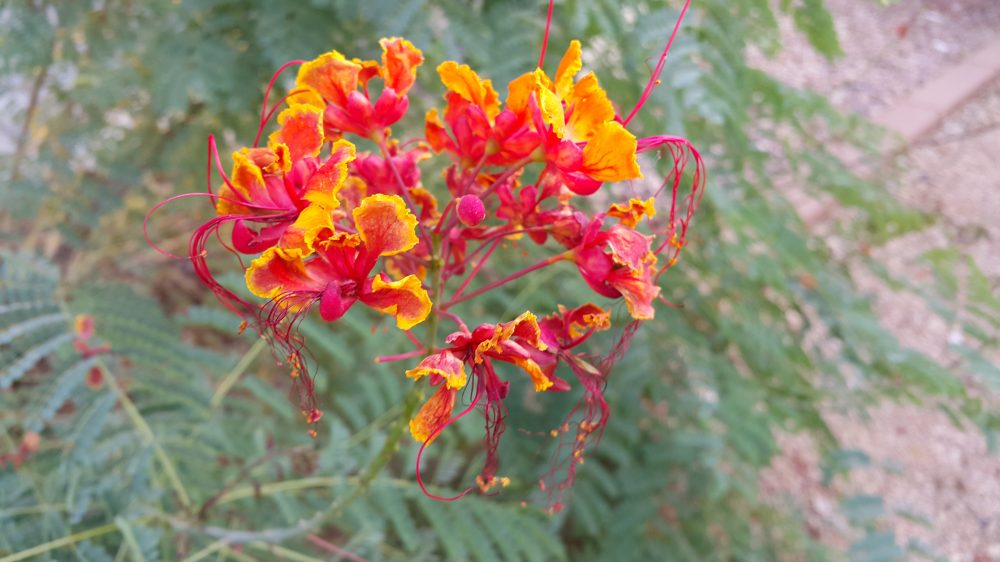 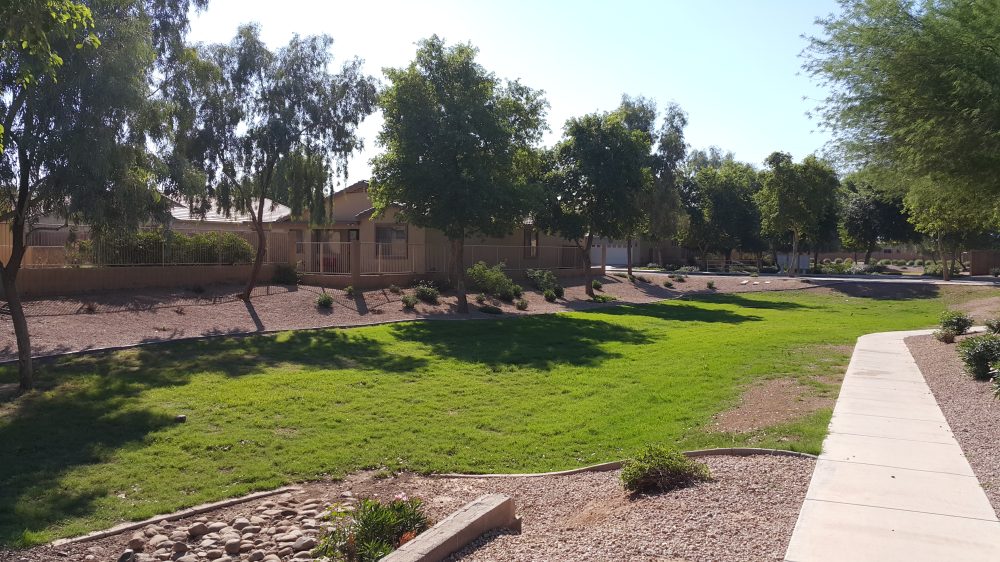 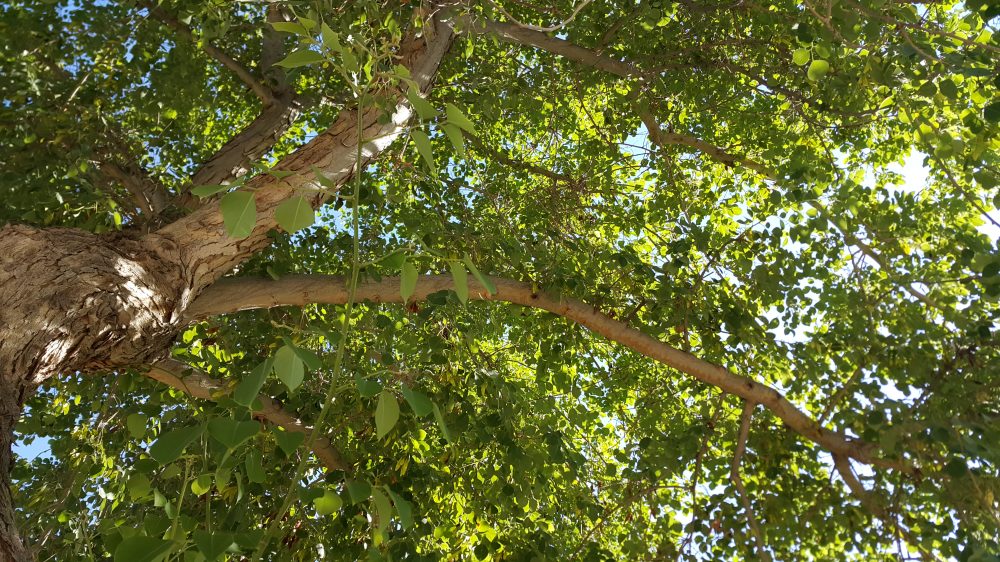 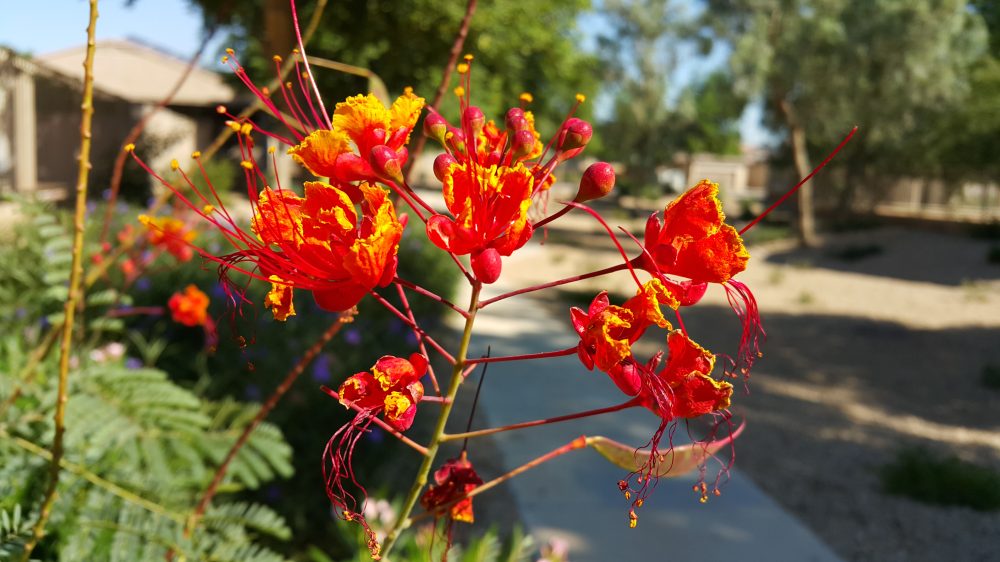 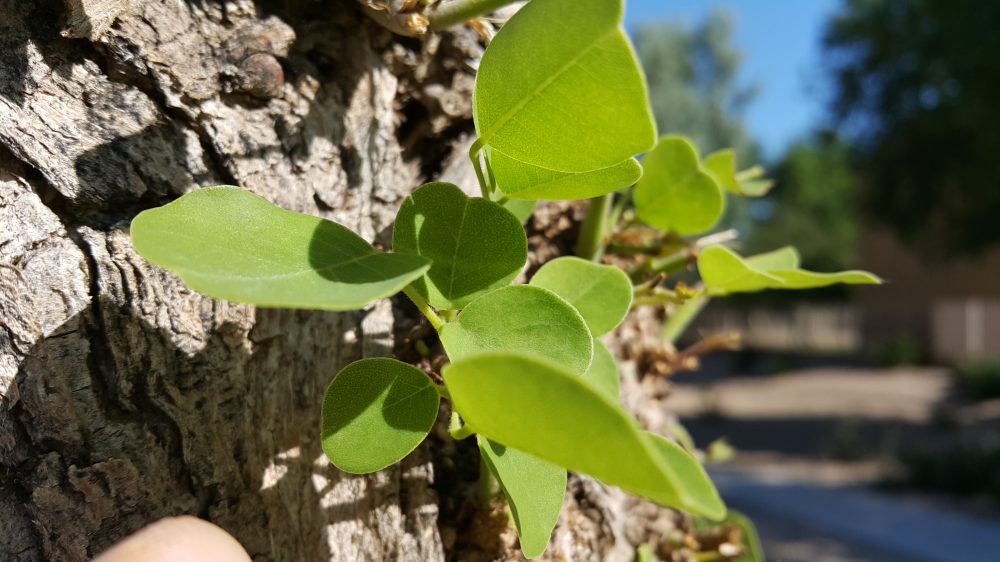 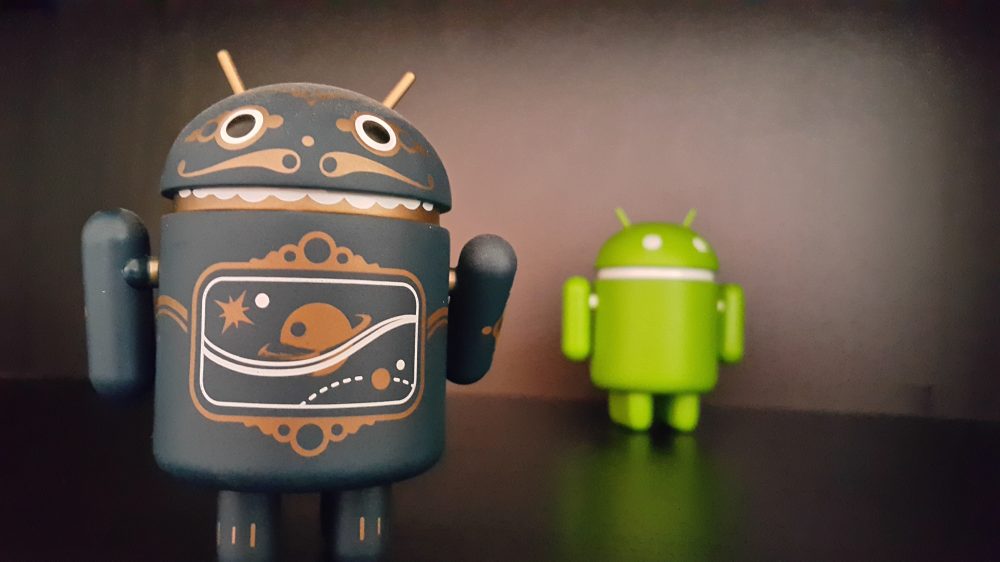 For video, the Galaxy Note 4’s camera can shoot up to UHD quality with a resolution of 3,840 x 2,160. I’ve put together a beautiful cinematic camera test using the Galaxy Note 4 that you can check out here, but as you can see in the images above, this camera doesn’t mess around. Speaking of mess, again I find myself wanting a simplified interface in almost every area. It’s nice to have camera options, but surely it could be organized a little better. It’s not all bad, but still feels a bit clunky in certain areas when compared to other smartphone cameras. Either way, thumbs up to Samsung for the image quality here. 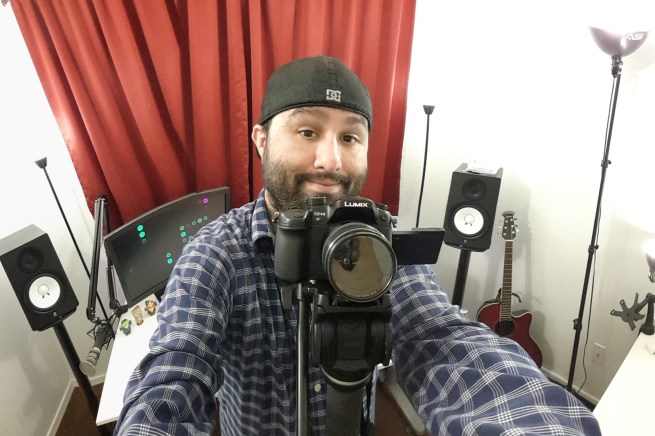 The 3.7-megapxel front-facing camera on the Note 4 is also a great improvement. Images from the Note 4’s front camera aren’t going to be the best, but much better than its predecessor. Samsung also allows you to use the heart rate sensor on the back as a shutter button and we also have a new “Wide selfie” mode that will take 120 degree panoramic photos with a slight rotation of the device.

So what about battery life? The Note lineup in known for impressive on-screen times and power management and there’s no difference here. As mentioned before, I’ve been testing out the Exynos octa-core Galaxy Note 4. This is an internationally unlocked model, so your battery life may be different than mine. With that said, I was still able to get as much as 5 to 6 1/2 hours of on-screen time.

If you do find yourself running out of battery quickly, Samsung has included an Adaptive Fast Charging brick which will allow you to charge up its battery from zero percent to 50 percent in about 30 minutes. Behind the Galaxy Note 4’s back cover.

While I haven’t had a chance to test the Snapdragon model yet, I’ve heard that it performs much better in the area of battery life. I’ll be sure to update this review when I’ve had enough time with the US carrier version of the Galaxy Note 4. Either way, battery life is going to be very different for every person and it’s hard to average out with a powerhouse smartphone such as the Galaxy Note 4.

There’s no denying that this is one of Samsung best smartphones to date. Of course, we expect innovation over iteration, but I believe that Samsung has hit the nail on the head with the Galaxy Note 4. Sure, there are little quirks and annoyances about it, but overall it’s a solid smartphone. The Galaxy Note 4 will provide you with most everything that was great about the Galaxy Note 3, but much needed improvements where it counts. For a full comparison between the two, be sure to check out our “Ultimate Comparison” article. Nothing is perfect, but Samsung has done the right things in the right places with the Galaxy Note 4 and I think you’ll enjoy it.