As we told you earlier this month, Xiaomi is holding an event in San Francisco today. While we aren’t expecting any new products to be announced, the company definitely has some interesting information to share with us as those of us stateside get an opportunity “to get to know the company and leadership a bit more.​”

The company’s CEO Lin Bin opened up the event giving us a bit of a description of what the word Xiaomi means—which would be “little rice” in Chinese. But the oft-used ‘Mi’ branding also stands for something else: “mobile internet.”

In 2014, the company sold 61.1 million Xiaomi phones, which constitutes growth of 227%. They can also tout that 5 out of 8 of the most-activated Android phones in China are Xiaomi handsets. But the company’s CEO seemingly wanted to make it very clear that Xiaomi is not just a hardware manufacturer that wants to sell handsets—they are an internet company.

"We are an internet company," says @Xiaomi cofounder Lin Bin. "We are not a handset company."

The CEO also touched on the rapid growth of Xiaomi’s Android skin, MIUI. While the selection of software and services originally had somewhere around 100 users in August 2010, it now sports more than 100 million users. The company does weekly updates to MIUI, very heavily driven by the feature demands of customers. Xiaomi says that it has sent out a total of 224 of these weekly updates so far. The 225th update is landing at some point tomorrow, according to Hugo Barra.

Xiaomi sells all its products direct online and keeps the number of models low to reduce costs. pic.twitter.com/9ZMDNiBL2w

The shipping operation that Xiaomi has is massive, with 11 fulfillment centers, and peak daily deliveries of 940,000. The company touts that it has 1.8 days of average delivery time, and 19 hour express delivery is available in 22 cities. The company has 2,765 workers tasked with answering calls—and support is available 24/7.

Hugo Barra went on to talk a bit more about MIUI, which while it ships default on all of Xiaomi’s Mi phones, it’s compatible with 347 model phones across 96 brands. Barra detailed how MIUI is built specifically for the Chinese market, including optimized T9 input for Chinese, a silent first ring for unknown numbers, and the inclusion of personalized group chats with nicknames.

Barra spent a lot of time digging deep into the features of MIUI in general and comparing Xiaomi’s lineup to Apple’s (with the notable missing comparisons to Google’s devices). He touched on the different parts of Mi Cloud that make up many of the company’s internet services, comparisons of MIUI multitasking to that of iOS 8, and the fact that MIUI has just a ridiculous number of features. There are more than 5,000 themes available for MIUI and they’ve been downloaded more than 2 billion times. 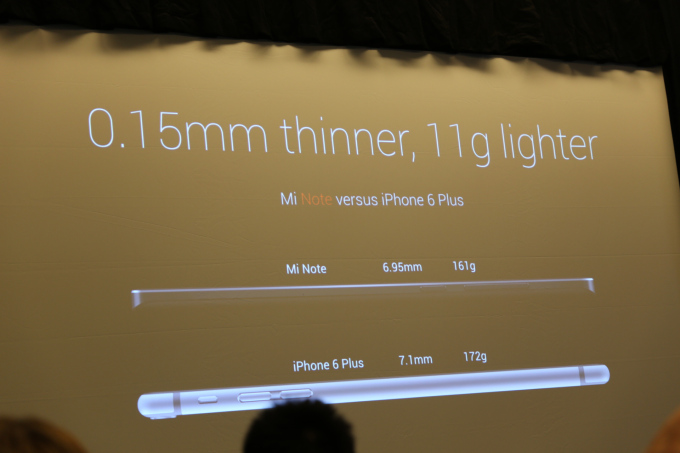 The Mi Note also got the spotlight at today’s event being compared directly to Apple’s iPhone 6 Plus. Barra pointed out that the device is thinner and lighter than Apple’s, and has a screen that’s actually .2 inches larger. Additionally, the Mi Note supports two different size SIM cards: both micro and nano.

Barra confirmed during the closing Q & A session that Xiaomi smartphones and tablets will not be coming to the US later this year, but that the company is definitely “thinking about” bringing Mi.com to the US. Products other than handsets might make their way to this side of the Pacific later this year.

Xiaomi’s Lin Bin says it’s part of the company’s culture to “be friends with our fans.” #xiaomi @CNET

Part of Xiaomi’s success is seen in its user engagement on forums. Its Mi Forum boasts 40 million users. #xiaomi @CNET

Xiaomi sells a 49" 4K TV with soundbar and subwoofer for about $600. pic.twitter.com/DGmJHd4iRX

Some of Xiaomi keys: only five models over 3 years, e-commerce only in China, deep engagement with fans