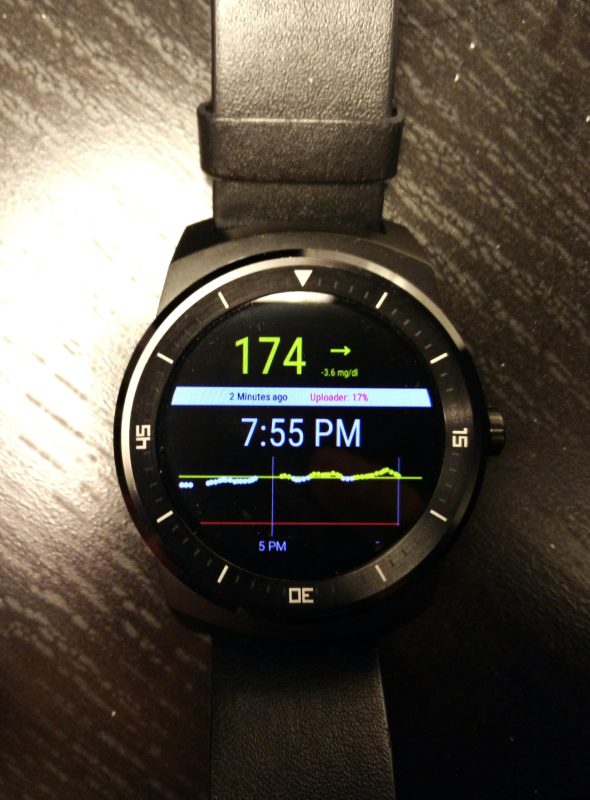 Wearables are slowly but surely making their way into our daily lives, but one very critical aspect—health—is already helping to bring them mainstream. It’s something that every person is conscious of on a daily basis, and wearable device makers—as evidenced by the countless fitness trackers on the market—want to make it easier to stay on top of exercise, diet, and more. But another aspect of our health, chronic illness, is also big opportunity for wearables to make a difference—and they already are.

About half of all American adults have some kind of chronic illness, and diabetes is one of the most common. With the advent of smartwatches, we all now have quick access to at least one useful stat: our heart rate. But what if those with diabetes could just as easily monitor blood glucose levels? No mainstream smartwatch can monitor this alone, yet, but now one developer has released an app for Android Wear that will plug into a Dexcom CGM (continuous glucose monitor), providing glanceable updates every five minutes on blood glucose levels.

Dexcom’s CGM making its way to wearables isn’t new. Last month we told you that the company had plans to officially launch an Apple Watch app, which is now available and plugs into the Dexcom G4 system with Share. Now, Android Wear users also have access to that data on their wrist, though, thanks to an unofficial pair of apps called xDrip and NightWatch—which are currently available to download from GitHub via a developer presumably named Stephen Black.

The first part of the equation, xDrip, lets owners of Dexcom Share receivers (which constantly pull data via a skin implant) retrieve their data over Bluetooth LE. After you walk through set up (detailed instructions can be found on GitHub) and enter your 10 character Dexcom receiver serial number, you’re good to go—after about 5 minutes, you’ll start seeing your blood glucose data in the Android app. But the real magic here—where wearables really shine—comes from a second app, NightWatch, which sends this streamed data straight to your wrist via Android Wear.

One person posting to the Android Wear subreddit is already using the pair of apps, and had only good things to say:

[This] gives me my always updated blood glucose levels in real time, updated every 5 minutes. No more digging around for the stupid receiver in my pocket – just a flick of the wrist, and I know what my body is doing. I’ve been a type 1 diabetic since age 12, and am now 27. This is such an amazing thing for me. While it may seem like a small thing, I love it, and the development team deserves some recognition!

The app can do a lot more than just show you a graph of your blood glucose levels (although that’s all I would need to be impressed). There are 4 different watch faces included (that embed the data so that it’s always glanceable), a scrollable graph that shows blood glucose over the previous 24 hours, customizable high and low levels for the graph, and alerts to let users know when their graph goes above or below those pre-set limits.

Now that this is possible, all that’s next is for wearable devices to incorporate new sensor technology to do away with the need for the Dexcom receiver and implant. Even without that, though, apps like this provide a new level of convenience allowing those with chronic illness to live a more normal life than ever. Something that not long ago required constant skin pricking is now possible with a glance at the wrist. Embedded tech in smartwatches themselves is probably not far off, but lives are clearly already changing without it.