Pushbullet for Android gets updated with rethought interface, more 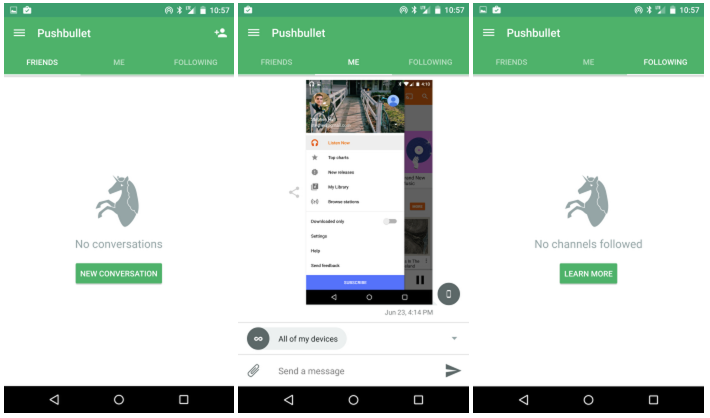 Pushbullet has redesigned their app a bunch of times since the service launched, and now they’re pushing yet another big update. With the latest version of Pushbullet, things have been reorganized to be split between three distinctive categories: friends, me, and following….

We’ve completely reorganized our app, putting things where you expect them to be. Instead of a big chaotic list of messages, they’re now categorized based on where they came from. The most important category is Me, which are things you’ve shared between your own devices.

The company has also completely re-thought how messaging with friends works. Instead of a confusing list of all the pushes you’ve received, messaging friends looks a lot more like… well, messaging. You can tap any friend, see your messaging history with them, and quickly send a message or file.

This move toward the Pushbullet app being more similar to any other messaging client is odd to me, as it makes the app seem parallel with other —more popular — offerings such as Facebook Messages and Hangouts. But Pushbullet makes sure to note the difference here: “They’ll receive your message on whatever device they happen to be using, whether phone, tablet, or computer.”

The company’s Chrome, Safari, Firefox, and Opera extensions have also been updated, along with the Pushbullet desktop client for Windows and the company’s web interface. The Windows app in particular has some nice features, including real Facebook-inspired chat-heads for messaging.

Head over to the Play Store to grab the Android client update for free.