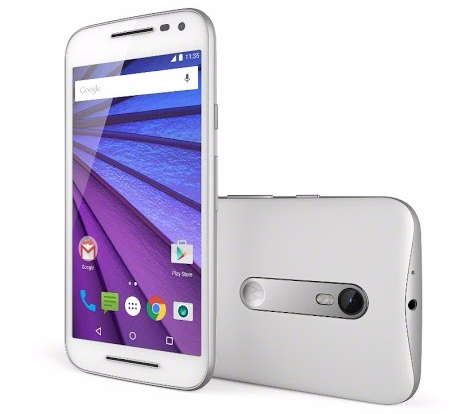 After almost a dozen leaks over the last couple of months, Motorola has today made the 2015 Moto G official. As with previous years, this handset is made for the budget-minded customer in mind, but it definitely is one of the better options in its class and you won’t be sacrificing much in terms of the overall Android experience…

As we previously saw, the phone will sport IPX7 waterproofing, a 2470 mAh battery, a quad-core Snapdragon processor, expandable storage via microSD card, a 13-megapixel rear camera, a 5-megapixel front camera, and the usual 4G LTE support.

Specifically, the processor will be the Qualcomm Snapdragon 410 w/ 1.4 GHz quad-core CPU, the phone will have a 5-inch 720p HD display, and the battery will sit at 2470 mAh. The phone will be available in 8 GB storage (w/ 1 GB of RAM) and 16 GB storage (w/ 2 GB of RAM) options, both having removable storage that supports up to a 32 GB micro SD card.

As you might expect, the 3rd generation Moto G has support for Bluetooth 4.0 LE, 802.11 b/g/n WiFi, and packs the typical sensors. The phone will be available in black or white by default, with Motorola shells and Motorola Flip shells available in several different varieties. It runs Android Lollipop out of the box. And yes, as was previously rumored, the phone will be hitting the Moto Maker.