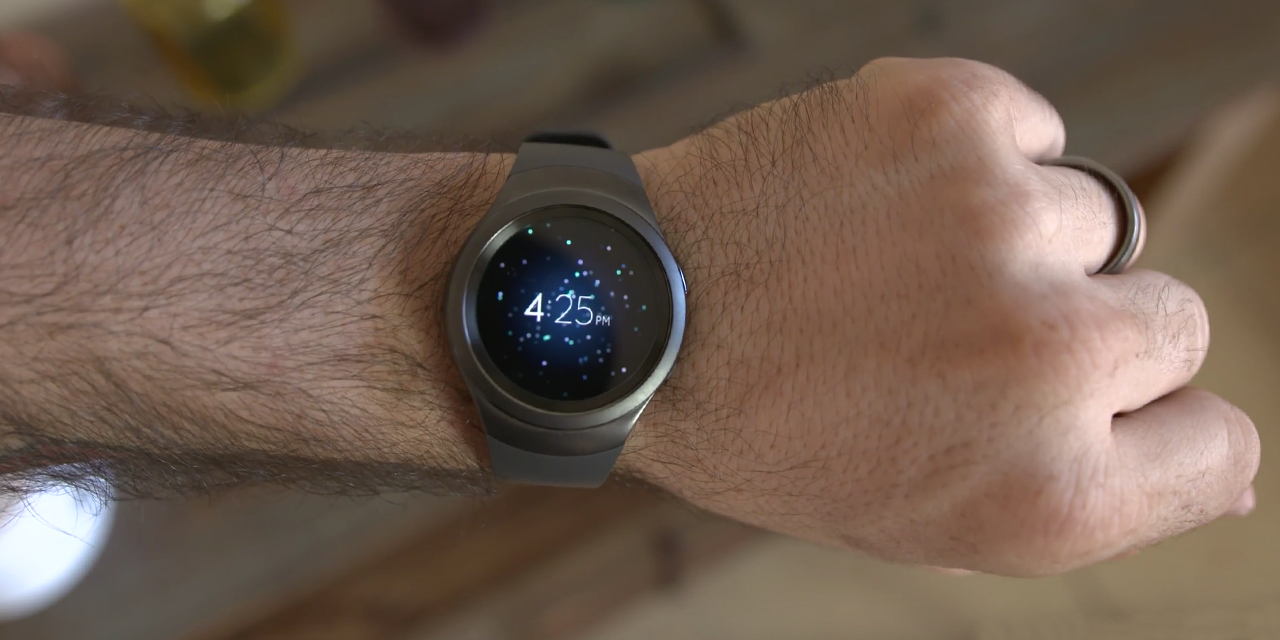 Today we’re taking a closer look at Samsung’s Gear S2. This new smartwatch was announced just last month during IFA 2015 and has been the talk of the town lately. We took a first look at it not too long ago and compared it with one of the other top smartwatches on the market, but it’s finally available to purchase. Either way, the Gear S2 is shaping up to be one of the top dogs in smartwatches thanks to some of its unique features — which surprisingly have nothing to do with Android Wear. Yep… this little guy is running Tizen and for the first time, I absolutely love it…

This is one of the smaller smartwatches out right now as well. That may not be a good thing for everyone, but the Gear S2’s 40mm casing and form-factor looks pretty good on a wrist. The design is a bit sporty, but Samsung’s Gear S2 Classic will be around to solve that issue. I’m a fan of the sport look though and the body is made up of 316L stainless steel and feels pretty solidd, but doesn’t weigh down your arm too much. Inside of that casing you’ll find a 1.0GHz dual-core processor, 4GB of storage, 512MB of RAM, Wi-Fi, Bluetooth 4.1, NFC, and an optional 3G model as well. The Gear S2 also comes along with two different sized elastomer bands to ensure a snug fit for everyone. Unfortunately, those bands are proprietary to the Gear S2. You won’t be able to slap on any custom band, unless it’s designed with the S2’s connectors. Not a deal breaker, but if you want that level of customization, the S2 Classic is the only way to go.

There are a couple of buttons on the side with the top one used as a back button and the bottom used for quick app access or a customized shortcut with a double press, plus a microphone in the middle of the two for voice input, but the majority of navigation will be done on the touch screen and the Gear S2’s innovative way of taking you through the menus and options. Samsung has gone a different route than its competitors with navigation as the Gear S2 utilizes the bezel as its main form of navigation. Rotating the bezel around the S2’s crispy 1.2-inch Super AMOLED display will easily take you through the various screens on the main page, choose from different apps, and settings options. It’s one of the best ways I’ve seen for navigation on a device of this size and I’ve found that even using one finger, the bezel still rotates with ease. Navigation using the bezel just feels so damn right. Once you’ve navigated to an option you’d like to select, a simple tap on the display will make that selection.

Check out our Samsung Gear S2 unboxing & review video below:

This time around, Samsung has made its smartwatch compatible with most Android devices, which is a definite win. The setup process is rather simple, but be prepared to bloat up a non-Samsung smartphone with a few apps to get everything functional on the watch side of things. Most of the S2’s settings and features can be controlled within the app as well as on the watch itself, but with the app you’ll be able to more easily manage watch faces, download compatible apps, and load it up with music and images. The Gear app is also where you’ll be able to rearrange the order of icons with the app list. While there is a lot of customization within the app, there’s a ton you can do on the watch itself too.

A simple tap and hold will allow you to sift through various watch faces on the Gear S2, but even in the main menus, which navigate beautifully on its round display, you have the ability to tap and hold to completely remove sections, add new ones, or hold and drag to rearrange them altogether. Samsung has given the S2 very specific and granular customization options that I’m sure most anyone will appreciate. 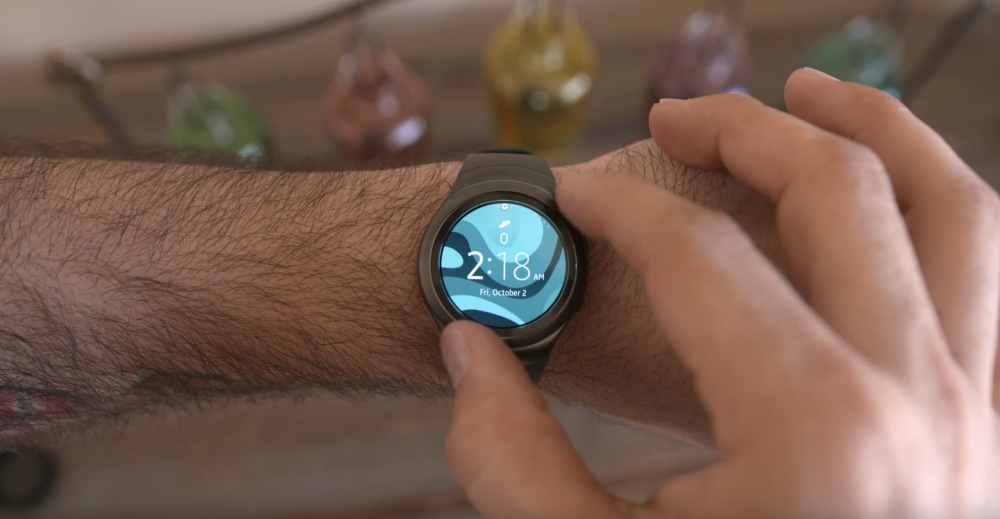 Of course there’s a heart rate sensor on the backside and sensors within that can be used to monitor your activity, but none of that’s really new to smartwatches. Unfortunately, there’s no speakerphone on the standard Gear S2, but that doesn’t stop it from allowing you to dial numbers using its tiny little dial pad. If you want calling capabilities, you’ll have to spring for the 3G model. Notifications are supported in full on the Gear S2, but you’ll notice that some are more basic than others, that is until developers hop on board to optimize a bit, but you’ll have reply options for most services like texts and hangouts out-of-the-box. There’s standard quick replies available, but you can also utilize voice dictation, or even a small little (and mildly annoying) keyboard that can be used to reply, but I’m not a big fan it.

As for battery life, Samsung promises 2 to 3 days, but I think that’s a little ambitious. I made it through a full day with about 43% battery remaining, but I wasn’t confident enough to leave it off the charger for the night. I’m a pretty heavy mobile user with a lot of notifications coming in throughout the day so that will definitely impact performance, but your luck may be better in this department. I’ll be sure to update you on this information in my S2 Classic review. The good news is that charging is pretty simple. The included wireless charging dock snaps the watch into place with magnets and juices it up rather quickly. But due to the Gear S2’s design, the only way you’ll be able to use a traditional charging pad is if you remove the watch band which isn’t ideal. 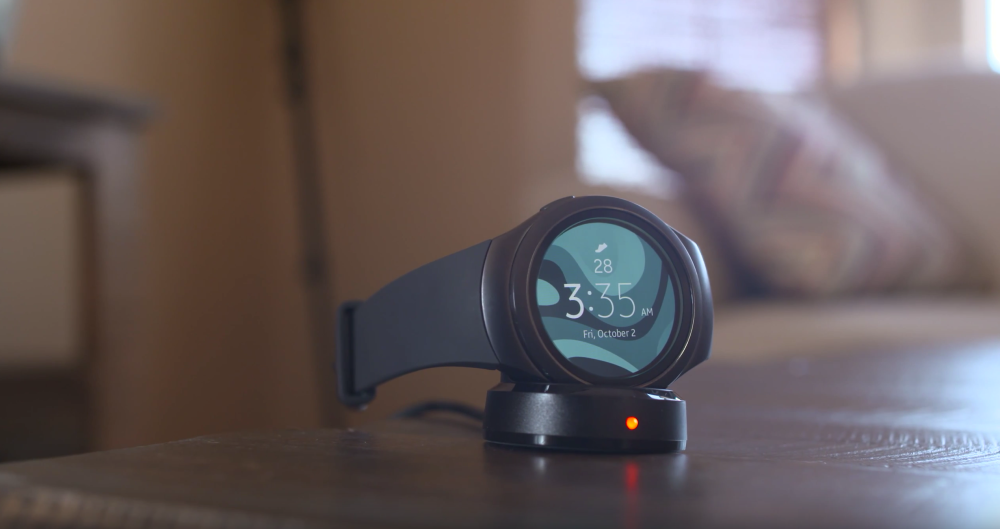 Here’s the bottom line: Samsung’s Gear S2 is one of the best smartwatches of the year. Hands-down. It has the looks, the features, and its rotating bezel navigation is a joy to use. Without a doubt, my favorite way to navigate a smartwatch to date. If or when Samsung adds iOS support to the Gear S2 lineup, I believe they may have a widely adopted hit on their hands. The Gear S2 starts at $299 and with everything considered, I think it’s well worth the price. Let us know what you think in the comments below.