Year in Review: These were the 10 most important moves that Google made in 2015

2015 saw many announcements and developments within the Mountain View company. It was a big one. While we may not have seen as many of the flashy moonshot projects we’ve seen announced over the last few years, like Google Glass, Project Loon, Project Titan, and others, 2015 came with some big changes, upgrades, products, and services. From Google being completely restructured to be a new huge conglomerate called Alphabet to the recent launch of the company’s Nexus line, 2015 wasn’t a boring one for Google by any stretch of the imagination.

Here’s are some of Google’s most important announcements, in no particular order…

Easily one of the most important events of 2015 was that Google… became no longer really the same Google we’ve known since its birth. The company was becoming too big with its focuses spread far too wide. While Android still to this day suffers from fragmentation and lack of focus, Google decided in 2015 that its entire business was suffering a parallel problem. Investors weren’t okay with the fact that Google was tossing heaps of money at its money-losing moonshots and acquired companies, so it made sense for the company to morph itself into what is now known as Alphabet.

Rather than having one huge company known as Google, with tons of projects, services, and products (some barely related to the core of Google’s vision and goals), Google is now just one part of a larger company — Alphabet. For all intents and purposes the things that Alphabet is doing are the same as before the change, but now things are organized differently. Sundar Pichai became CEO of the core Google division, Larry Page and Sergey Brin get to focus on the (much) bigger picture, and there are now dozens of projects that are no longer under Google, but are Alphabet companies themselves. Investors are happy.

Google I/O 2015 was pretty light on big announcements. Google showed off Android Marshmallow, the latest version of Android Wear, Google Photos, Google Cardboard Expeditions, and more. But one of the biggest announcements to come from I/O was the introduction of Google’s successor to Google Wallet, Android Pay. It’s obvious why Android Pay matters, because as the world moves away from plastic debit and credit cards toward contactless payments, Google needed to beat competitors like Samsung, Walmart, and others to the punch.

Although Google pioneered mobile payments with Google Wallet, Apple Pay caught headlines as being game-changing and totally different. Google had to introduce a new product with a new image so that the world would know that Android phones are — and have been — capable of much the same functionality. The product also brought new security features that weren’t present in Google Wallet, and a decent ad campaign to keep the masses informed that Apple Pay isn’t something particularly special.

In the same vein as Android Pay, Google Photos was something that was under appreciated amidst all the Android Marshmallow excitement at Google I/O. I would argue that Google Photos is definitely near the top of my list for most influential new Google services in 2015, and part of the reason for that is because it became a product I depend on practically over night. I used to hate not having my photos (across a dozen different devices) organized and categorized, but Google Photos did that for me quickly and easily.

Google Photos has apps for the web, Android, and iOS, and lets you just throw all of your photos on the cloud for free. Yep, Google was pretty much the first company to offer unlimited storage of your photos and videos — albeit in less-than-perfect quality — for $0. I still keep the raw files on all of my devices when need be, but it’s nice peace of mind knowing that all of the photos on my laptop and phones and constantly being backed up on the cloud with no maintenance required on my end.

Android Lollipop was probably the biggest overhaul to Android since its conception, but 2015 saw Google build on that. Lollipop brought an entirely new user interface, Material Design, notification enhancements, performance improvements, and more. Android Marshmallow, most notably, brought support for hardware fingerprint sensors, support for the USB Type-C port (which is growing in popularity), doze mode, a vertical scrolling app drawer, enhanced security, and more. It wasn’t the most flashy update ever, but it brought a plethora of useful additions and filled in some gaps that Google left open in 2014.

In April of 2015, Google officially made its MVNO official after many months of speculation. While Project Fi is still evolving and growing, it shook up the MVNO space right from the get-go. The service asks a flat $20/month fee for unlimited voice and texting plan, and then data costs $10 per GB after that. It’s pretty simple. On top of that, Fi pulls its service from both Sprint, T-Mobile, and your WiFi connection, so that — theoretically, at least — you will always have the best possible quality connection for data and phone calls.

As of today, Project Fi is for Nexus devices only. At launch, the service only worked with the Nexus 6, and has since been pushed as a great option for those buying the Nexus 6P and Nexus 5X. I’m a Project Fi subscriber myself, and while I would exactly recommend you jump on board and use Fi as your main carrier quite yet, this service definitely has promise. Seeing what happens in 2016 is going to be interesting. Will Google open up Fi for the iPhone and other Android phones? Will Google open it up internationally? We’ll see.

We exclusively told you about the new Chromecasts a couple of weeks before they were even announced, and they turned out just as we expected. The new devices aren’t any kind of drastic departure from the original Chromecast, but they do bring new colors, a new design, and improved wireless connectivity. Beyond the new hardware, though, Google also introduced a whole host of new software features for the Chromecast line. The Chromecast (both of them), now natively support Spotify, Google introduced new types of live feeds for the Chromecast home screen, and the Chromecast app got a hefty update in 2015 too. 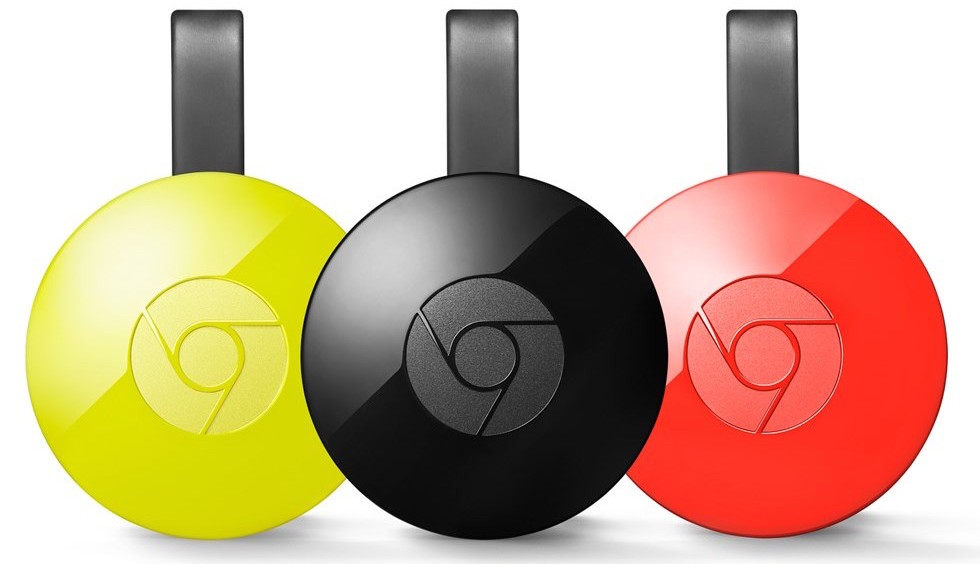 On top of the new standard Chromecast, Google also introduced the Chromecast Audio. Unlike the normal Chromecast that connects to a TV by way of HDMI port, the Chromecast audio simply plugs into your legacy analog sound system and basically makes it smarter. You can plug one of these Chromecasts into old speakers in your living room and breathe new life into them, turning them into the perfect internet-connected sound system. You can stream Spotify of course, but all other media sources that can be casted can be pushed to your Chromecast Audio as well.

The two Nexus devices Google released in 2015 are some of the best ever. While the Nexus 5X has not lived up to the hype by any means, the Nexus 6P — the larger of the two — is widely regarded as one of the best phones of the year. Google did a few things right with these devices that pretty much every other Nexus phone has failed at. The hardware is absolutely stellar on the Nexus 6P, the cameras on both phones blow much of the competition out of the water, and battery life on both phones is pretty much up to par with the big flagships of the year.

The phones brought the prototype for much of what Google introduced with Android Marshmallow. Both phones have Google’s “Touch ID” fingerprint sensors (which are located on the back of the devices, and work perfectly well), and they both ship with brand-new USB Type-C ports that charge the phones super quick and usher in an age of phones that move beyond traditional micro USB. And, to boot, even a few months later, they’re still some of the only phones that are running the latest version of Google’s mobile operating system. They’re the only way — even in 2016 — to get a regularly and reliably updated Android phone.

The Pixel C is important, but it’s the weird kind of important. It’s not important because it’s going to be Google’s next big thing. It’s not going to make headlines like Google Glass did. It’s not going to replace your grandmother’s iPad. And it’s probably not even going to be something that you want to buy. It’s important because it gives us a little bit of a clue as to what Google might be planning for the years ahead. A line that was traditionally just super-expensive (but nice) Chromebooks brought a tablet in 2015, and that tablet didn’t even run Google’s Chrome OS. It runs Android. 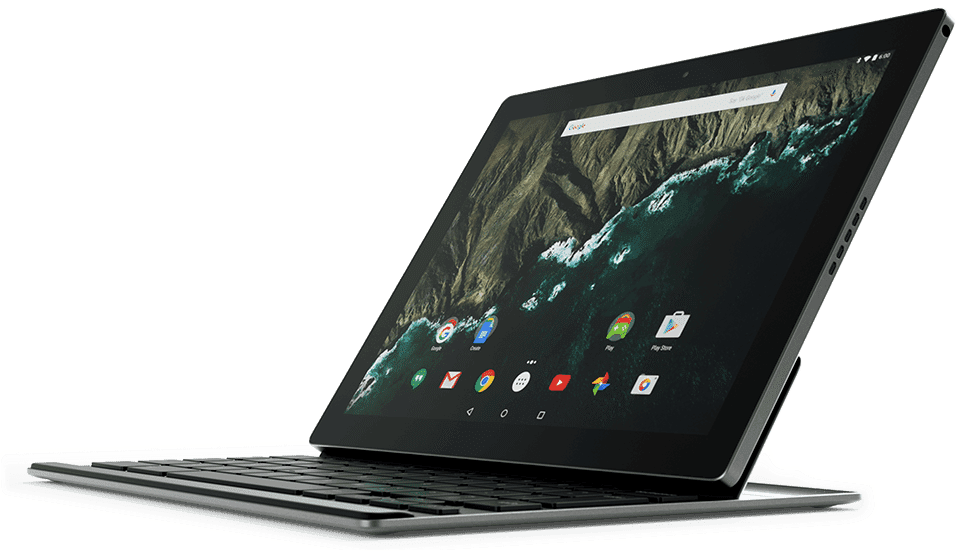 The Pixel C has some of the same aesthetics as the previous line up of Pixel products, but it takes Pixel in a completely different direction. Rumors of the convergence of Chrome OS and Android have been tossed around for years, but it wasn’t until now that it seemed that maybe Google has long term plans of ditching Chrome OS. It’s weird, though, because Chrome OS is great — and Chrome OS devices are selling well. Chrome OS laptops are some of the most widely-used devices in schools across the world, and Android still really sucks for productivity. It will be interesting to see what Google does with Android N in 2016. 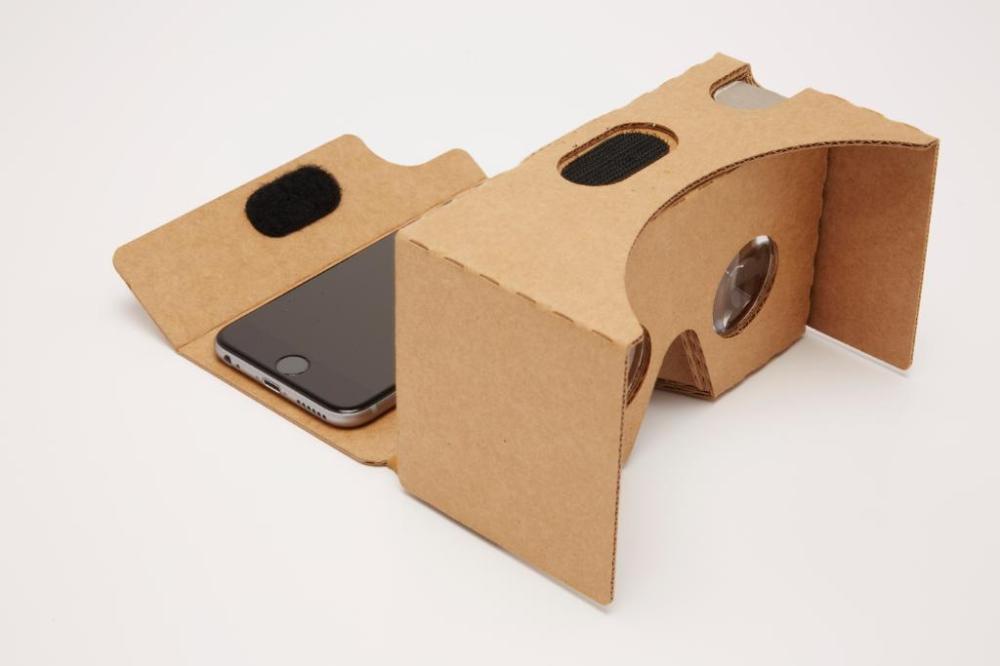