HTC’s financial bright spot last year came in the form of the One A9. However, the device was ultimately not able to make up for the declines that occurred the rest of the year. Ultimately, HTC’s revenue dropped 35% when compared to 2014.

HTC’s total revenue for 2015 was NTD 121.68 billion, or around $3.64 billion. In 2014, they made NTD 187.91 billion ($5.62 billion). While the One A9 resulted in a revenue uptick from September to November, the holiday season saw a surprising and significant decline. This year, HTC’s stock was removed from the index of Taiwan’s 50 largest firms. Many investors consider the company to be effectively worthless as its share price is less than the amount of cash it has on hand.

As HTC enters 2016, the company’s virtual reality and fitness plays are finally being released to consumers. HTC released one last development kit of their Vive VR headset at CES. The final consumer unit will be shipping to consumers in April, but not before Oculus begins delivering the Rift in March. Additionally, HTC, in partnership with Under Armour, is releasing their line of health tracking devices at the end of the month. 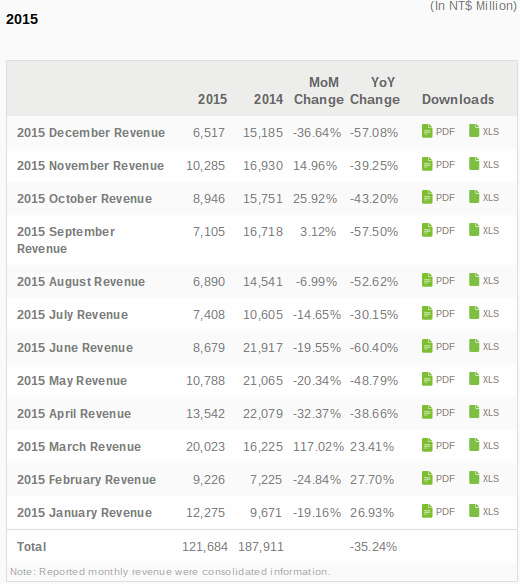 By forming partnerships with other companies, HTC is trying to be more than just a mobile device company. Both products take advantage of popular consumer technology trends and could sell rather well. In comparison, HTC’s RE camera did not find consumer success or resonance in 2015.