Marshmallow only saw a .2% increase in January’s Android distribution numbers despite the fact that it included the holiday season. This month was much better, however, with Android 6.0 growing .5% and now a full percentage point in usage.

At 1.2%, Marshmallow has the second lowest distribution among Android devices that accessed the Play Store in a seven day period ending February 1st. Even after four months of release, the figure is rather disappointing. The only thing lower than it is 2010’s Android 2.2 Froyo at .1%, down from .2%.

Lollipop rose to 34.1% from 32.6%, while all other OS versions are dropping. However, KitKat is still the most used version of Android at 35.5%. It will likely stay that way as more Lollipop devices get updated to Android M in the coming months. The three year old Jelly Bean is at 23.9%, while Ice Cream Sandwich is at 2.5% and Gingerbread at 2.7%.

Marshmallow’s numbers will definitely be aided as LG, Samsung, and Motorola begin releasing updates to last year’s flagship devices. Additionally, the MWC launch of a new generation of phones all expected to run Android 6.0 will help greatly. However, we shouldn’t see an impact until March when the devices become available for purchase. 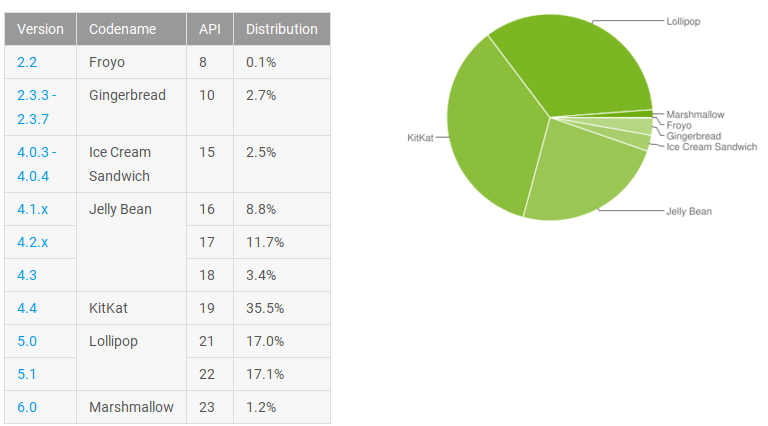