Huawei P9 & P9 Plus are official: get all the details on specs & the new Leica camera

Huawei has officially announced its next flagship smartphones today at a press event in London as expected. We were on hand to get a first look at the device, which boasts some pretty impressive specs and new custom Leica-designed camera system. Here’s the rundown…

The new devices include the P9 and P9 Plus, which are 5.2 and 5.5-inch versions of the device but otherwise the two are relatively similar.

Both include an all metal  body design with polished hairline brushed metal, a Kirin 955 2.5GHz 64-bit ARM-based processor, and a 12 megapixel dual camera system on the back featuring a Leica lens and Dual LED and laser autofocus. Huawei said its the world’s first device with a dual camera system with both an RGB and Monochrome sensor as well as the first with a dedicated depth ISP, and it also showed off what its calling precise depth focusing and hybrid auto-focus systems using those technologies. The company previously announced a partnership with Leica that would see the company leverage the German camera maker’s brand and photography tech in future devices, and it spent much of the event today talking up the device’s camera specs and capabilities (more on that below). 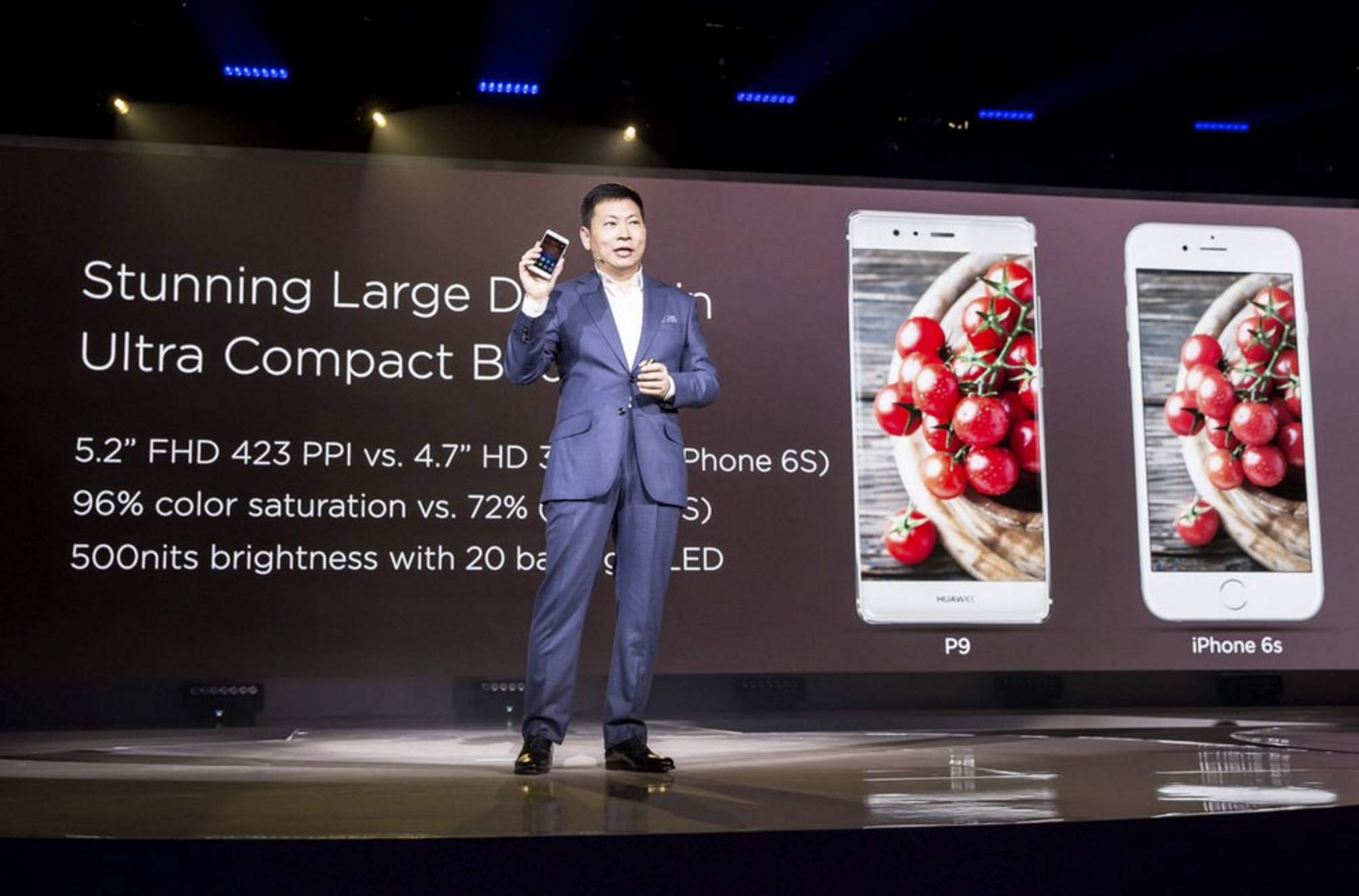 The P9 devices also include a fingerprint sensor on the back and a Dual SIM and support for 18 4G LTE bands.

The 5.2-inch P9 includes a FHD display, which the company was quick to point out on stage beats out the iPhone 6S with 423 PPI, 96% color saturation, and 500nits brightness with 20 backlight LED. It also includes a 3000mAh battery.

The P9 Plus packs in a similar but larger 5.5-inch FHD display with 401 PPI and again Huawei points out with much better color saturation and contrast ratio than the iPhone 6S. The Plus model packs in a larger 3,400mAh battery.

Huawei also made a point of noting that the P9 doesn’t have the much dreaded “camera bump”, which it noted is a much disliked feature of its biggest competitors, Samsung’s Galaxy S7 and Apple’s iPhone 6s Plus. And it also beats out those devices for slimness, Huawei said, at just 6.95mm compared to the Galaxy S7 at 7.9mm and the iPhone 6S at 7.1mm.

The company spent a long time talking about the various camera features of the device, which includes a full suite of professional controls and a dedicated Leica camera UI:

We’ll have more on pricing, availability and specs as the event unfolds. And soon some hands-on time with the devices.