As we approach Google I/O 2016, where we’ll learn more about Android N, Marshmallow continues its steady rise and is now on 7.5% of all devices.

Android 6.0 is up 2.9 percentage points from last month and still has a long way before becoming the most popular version. It was only in March that Lollipop became the most widely-used version of Android. However, with Android N’s earlier developer preview and some partners already testing N, this year’s update cycle might be different.

Lollipop dropped .2 percentage points to 35.6%, while KitKat is down to 32.5% and Jelly Bean is at 20.1%. Ice Cream Sandwich fell .2 percentage points to 2.0%, while Gingerbread and Froyo stubbornly remain at 2.2% and .1%, respectively. These numbers are compiled from Android devices that accessed the Play Store in a seven-day period ending on May 2.

Notable Marshmallow updates this month came from Blackberry and Samsung. PRIV devices on BlackBerry’s beta program received Marshmallow early in the month, with the full rollout starting last week. Meanwhile, Android 6.0 was released internationally at the beginning of the month for the Galaxy Note 4. Small OEMs like Nextbit released Android 6.0.1 for the Robin, while the update for the OnePlus One is in “final testing stage.” 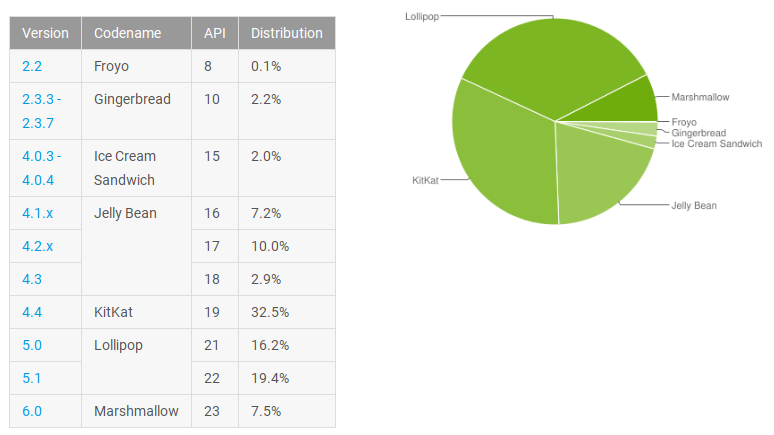