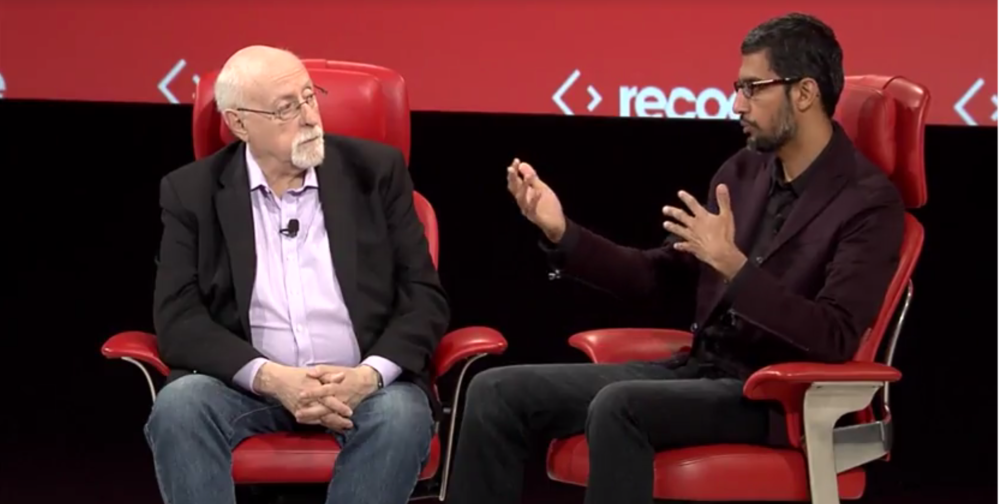 Google CEO Sundar Pichai took the stage at Recode’s Code Conference 2016 today, and while much of what he said were PR-friendly reiterations, he did elaborate and provide more color on some of the moves Google made at I/O late last month. Of course the topics of artificial intelligence, Google Home, Android OEMs, the Nexus program, search, and others came up, and Pichai also elaborated on Google’s bigger plans for the world — namely China and India…

A lot of the conversation revolved around artificial intelligence, what Google is doing in the space, and how that’s going to affect Google’s strong leadership in search. Google announced its Google Home competitor to Amazon’s Echo voice-controlled assistant hardware at I/O, and Pichai elaborated a little bit on how the company will compete with Amazon. One interesting tidbit that Pichai mentioned was that Google Home will have an “off the record mode” much like Google’s other products like Chrome and Allo. You’ll be able to enter this mode to prevent the device and Google from remembering your conversations.

In the same vein, Pichai also said that he believes that our interactions with artificial intelligence should be completely natural, referring to devices like Google Home as a “friend”. As for why the company hasn’t given a real name or personality to its voice assistant, Pichai says it “should be different for each user… like their own individual Google.”

Perhaps one of the more interesting things — at least for Android followers — that Pichai touched on was the future of the Nexus program. Of course with rumors of HTC making the next devices and Google’s problems with software updates, Recode’s Walt Mossberg asked what plans, if any, Google had for making its own phones. Sundar was quick to say that Google’s plan going forward is still to partner with OEMs to make the phones, but that Google would put “more thought” into them. When asked what this meant, Pichai said that the company plans to expand the functionality of the phones and build more features on top of stock Android. The company also said it would be “more opinionated” about the design of the phones.

Pichai also touched on China a little: “Where possible, we want to be in China serving Chinese users,” he said. Rumors of Google’s plan to reenter China have been steady for the last year or so. Recently, Reuters reported that Google has plans to launch a China-friendly Play Store sometime in 2016. This answer from Pichai is definitely a contrast to the position of Google several years ago, and suggests Google is taking a move back into China seriously.

Watch the full interview below: