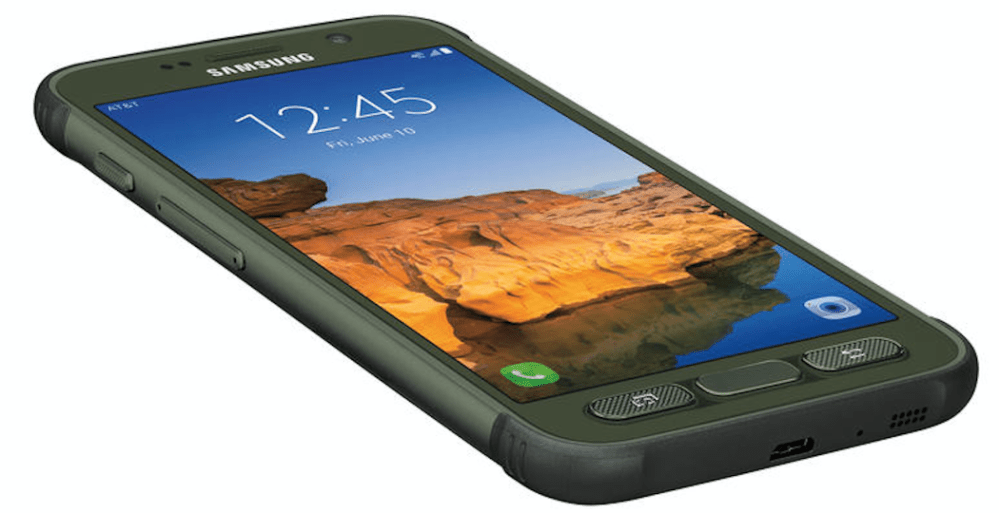 Samsung and AT&T today came out to announce the Galaxy S7 Active, the latest iteration of the duo’s super-rugged smartphone tradition. Just like last year’s Galaxy S6 Active, the phone is basically an S7 with a beefy case built in — which isn’t a terrible idea considering so many people slap an OtterBox on their phone anyway…

Most of the specs are the same as the standard Galaxy S7. You’ll find a 5.1-inch Super AMOLED display, a Snapdragon 820 processor, 4GB of RAM, 32GB of expandable storage, and a 12MP rear camera. To suit the phone’s beefier build, there’s also a huge 4,000 mAh battery within which AT&T says offers up to 32 hours of talk time. As with the Galaxy S7, the S7 Active sports Qualcomm Quick Charge 2.0 and a microUSB port to charge this battery (sorry, no USB-C).

The water- and shatter-resistant Samsung Galaxy S7 active is going to be available exclusively at AT&T starting on Friday, June 10th, and will be available in three colors: Sandy Gold, Titanium Gray, and Camo Green. You’ll be able to purchase the phone on AT&T Next for $26.50 for 30 months or AT&T Next Every Year SM for $33.13 a month for 24 months.

We’ve already had our hands on the device for a while now, so be sure check out our own Jeff Benjamin’s experience with the phone in video form. He says that the S7 active is much better looking than last year’s model, featuring “a simplified rear, improved front face buttons, and an overall design cohesiveness that showcases the line’s growth.”