In light of Google Assistant, Google Now has undergone several changes in the past few months. The latest has been in testing since October, but is now officially rolling out. A new ‘Upcoming’ tab shows more personalized cards, while more general items will remain under ‘Feed.’

Cards for sports results, news, people of interest, and entertainment will stay in ‘Feed’ and is still the first screen that users will see. Cards get a minor redesign, with weather no longer showing a full week’s forecast. The first three or so cards shown at the top of the feed can be from a variety of sections and surfaces what Google thinks is the most important info for you.

Sections for sport teams and other topics are more clearly labeled with bolder headers and separators. The remaining news cards are shown underneath. Starting in the US, there will also be a new card to tell Google what interests you want to see more info and stories about.

Meanwhile, ‘Upcoming’ will feature daily schedules, commute times, boarding passes package delivery info, and other tailored cards. Google states that this tab will provide a more “dependable view” compared to the previous version where personalized cards were mixed into more general interests ones.

These changes are rolling out today on Android in the US, with more countries and an iOS update coming soon. 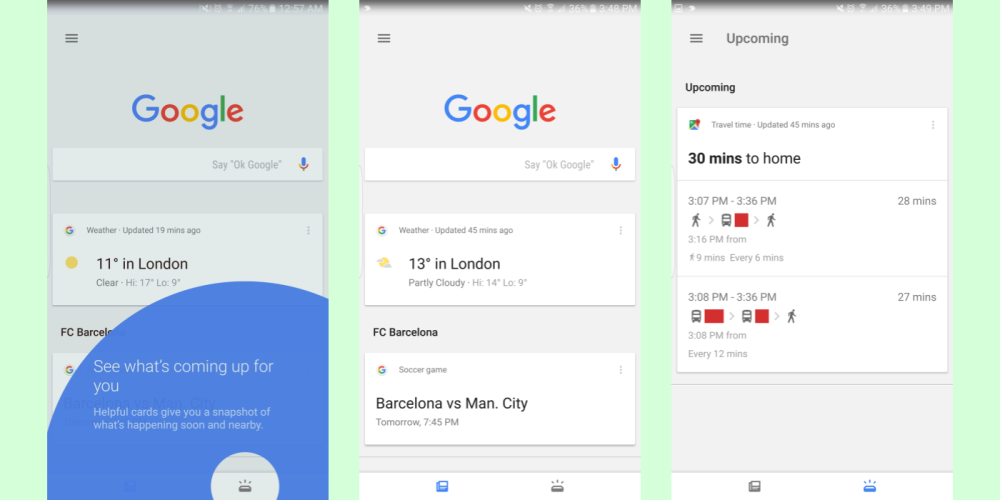 Update 12/8: The new ‘Explore Interests’ card is rolling out and features a panel of eight interests ranging from sports, entertainment, politics, and more. Each interest is further broken down into categories and genres, as well as a ‘Popular in your area’ section. The interface is quite slick, but users can also search to find exactly what they are looking for. Selections also appear under ‘Customize’ in their respective category.