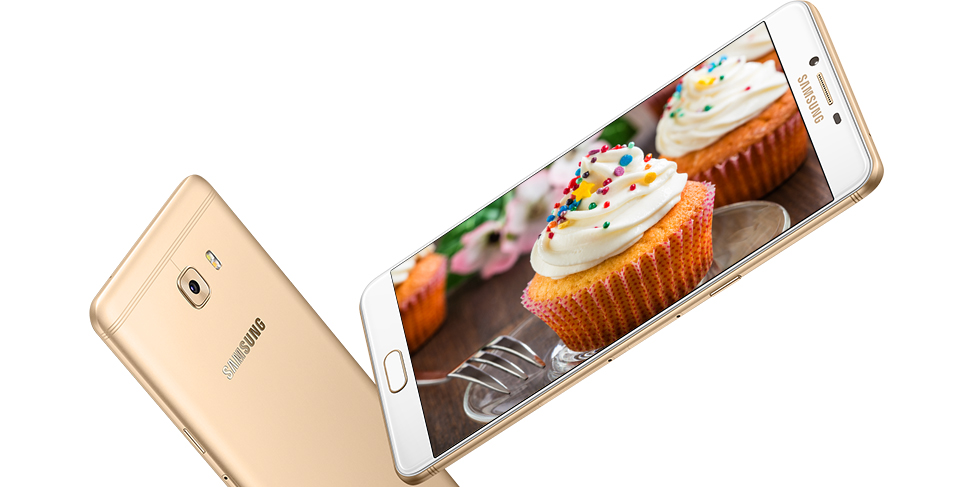 As the criteria (price, most importantly) for defining a ‘high-end’ smartphone becomes more and more blurred, new devices are filling in the gaps of the evolving smartphone market. Such is the case of the just-announced Galaxy C9 Pro, which sets its foot firmly in the midrange space while trying to aim a little higher…

The smartphone, destined to the Indian market (at least for now), is in fact a little beast. Its design — which looks dangerously close to the OnePlus 3T‘s — is rather simplistic and sleek, with smooth curves wrapping its back and a large, 6-inch panel taking up almost the entirety of the front.

The screen, of course, uses Samsung‘s Super AMOLED technology, while sticking to a reasonable 1080p resolution. Beneath that is the physical home button, which also serves as a fingerprint reader, interposed between Galaxy devices’ typical capacitive keys. The frame houses the other keys, as well as a headphone jack and a USB-C port.

As far as audio goes, the downward-facing speaker borrows a page from the playbook of Apple‘s iPhone 7, and uses the top earpiece to create a small stereo system. Cameras, too, offer top specifications, at least on paper, with a pair of 16MP eyes featuring an ultra-wide f/1.9 aperture.

The guts of the phone are no slouch, either; while the Snapdragon 652 may not entirely live up to Samsung’s claim of a “powerhouse” device, a whopping 6GB of RAM and massive 4000mAh battery should give a significant boost to performance. It’s a shame, however, that the C9 Pro comes with Android 6.0 Marshmallow out of the box, with no mention of Nougat to be found.

As for availability, the handset is set to hit the market some time in the latter half of next month, with preorders opening on January 27. There is a pink version rendered on Samsung’s announcement page, but apparently Black and Gold are the only versions that will be available at first. The price for the 64GB model is INR 36,900 (~USD 540).