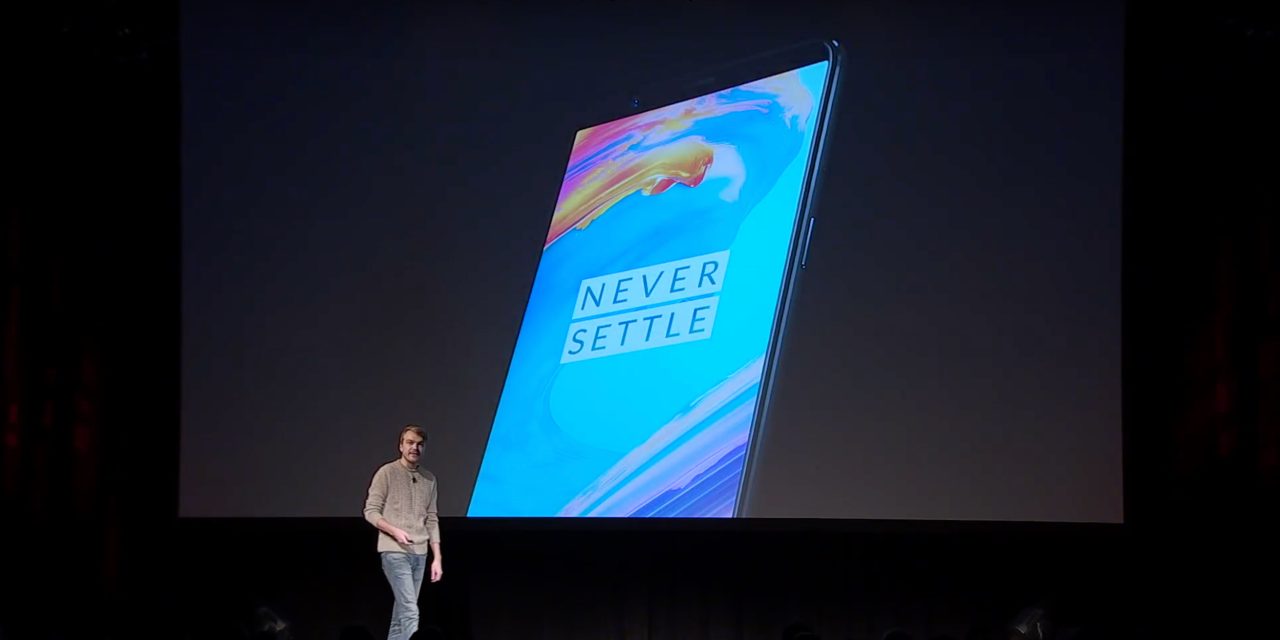 After weeks of rumors and leaks, OnePlus has finally announced the OnePlus 5T, the marginal step up from its other 2017 flagship smartphone. While there isn’t much if anything new inside the phone, OnePlus focused on bringing an 18:9 display and advanced camera features to the 5T…

The OnePlus 5, the company’s most recent flagship smartphone, was released just months ago in June. When it was first announced, there were a lot of complaints about how the backside resembled the iPhone 7 Plus. While the final product looked slightly different, we see the same build design on the brand new 5T.

Overall, the most prominent physical changes coming to the 5T is the 6.01-inch, 1080p (1080 x 2160 pixel), 18:9 aspect ratio display. This keeps with the 2017 smartphone trend to remove as much bezel as possible. In turn, OnePlus had to move the fingerprint sensor from below the display to the backside. Thankfully, just like the Pixel 2, the sensor is placed neatly in the middle of the back-side of the phone, making it easy to reach.

So as to not upset OnePlus users who preferred the front-facing fingerprint sensor, the company is introducing its own face unlock technology. While the company didn’t go into detail on how it works, it’s safe to say that it works similarly to the smart lock built into stock Android.

Inside the 5T, we have the Snapdragon 835 processor (same as the 5), 6 or 8GB of LPDDR4X RAM, 64 or 128GB of UFS 2.1 2-lane storage, and a 3,300 non-removable battery. Additionally, OnePlus has kept its word and has included a 3.5mm headphone jack but didn’t add wireless charging, believing that the company’s proprietary Dash Charge is still the better option.

Just like the 5, the OnePlus 5T is launching with Android 7.1.1 Nougat with the company’s OxygenOS. This skinned version of Android allows a decent amount of customizations not found in stock Android while not taking away too much from the operating system itself. OnePlus talked at length about how the company worked on only adding features to stock Android that just better the OS for users. Oreo will come to the phone in beta in late December with a finished version coming in early 2018.

Just like in June, a primary focus of the 5T for OnePlus is its cameras. This smartphone features the same 16MP front-facing camera that when paired with the phone’s “screen flash” can take decent low-light photos. Around back, the 5T shares the 5’s 16MP and 20MP sensors. The difference between both phones is that OnePlus removed the telephoto lens over the 20MP sensor and gave it a standard lens with an f1.7 aperture.

By changing the lens over the 20MP sensor, OnePlus is putting a focus on better low-light photographs. Now, when the phone detects less than 10 lux of light, it will automatically switch to the secondary camera and utilize the f1.7 aperture. The company is also using its “Intelligent Pixel Technology” which “merges” four pixels into one, which then helps reduce noise and brighten the captured photo.

OnePlus also worked on refining the camera application. The biggest change is to one-handed use functionality. Now, you can swipe up and down to access all of the different camera modes. The company also put a focus on the device’s Pro Mode, allowing users to manually adjust the ISO, white balance, shutter speed, and more.

If you’re interested in purchasing the OnePlus 5T, the company will begin sales on its website on November 21 for customers in North America, Europe, and India. The phone will cost the about the same as what the 5 did when it launched. The 6GB/64GB variant will cost $499 US while the 8GB/128GB model will set you back $559 US. These are sold unlocked and will work on AT&T and T-Mobile.