Android has had device backup and recovery support for many years, including automatic upload and download from Google Drive. One thing that was sorely missing, however, was the ability to initiate manual Android backups to Google Drive. Though it seems now this feature is rolling out to many devices, including older ones.

Previously, to trigger a device backup to Google Drive, the device had to be charging and connected to WiFi. This meant that if your device had a broken USB port, lost its ability to charge, or couldn’t connect to WiFi, you were unable to back up to Google Drive.

Back in August, we reported that Google promised manual Android backups would arrive in a future version of Android. Considering Android Pie was too close to release at the time for a new feature, we assumed that this meant in an update such as 9.1 or perhaps Android Q.

As reported by reader Alex, it seems a new “Back up now” button is beginning to appear in the Backup settings of devices of all kinds. According to the report, the feature is available on the Pixel 2, but also on some older devices too, like a Droid Turbo from 2014 running on Android Marshmallow.

Every device we tested internally also seems to have received the ability to do a manual Android backup. It seems Google is able to reach such a wide swath of devices across versions by rolling the feature into Google Play Services. If your device receives Play Services updates, you will likely see “Back up now” appear soon. 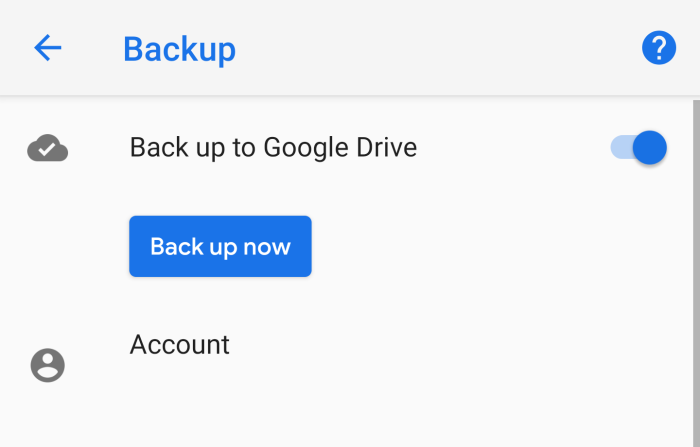 This makes sense, as the capability was always there, hiding in the depths of Android. As we noted in August, it was possible to manually trigger Google Drive backups from a command prompt using Android’s ADB tool. This method, of course, was of no good to users with a broken USB port.

While manual Android backups may not be a feature most people will ever need, the one time you may need it will be absolutely critical. Google’s decision to make manual backups available to almost all devices is certainly a welcome one.