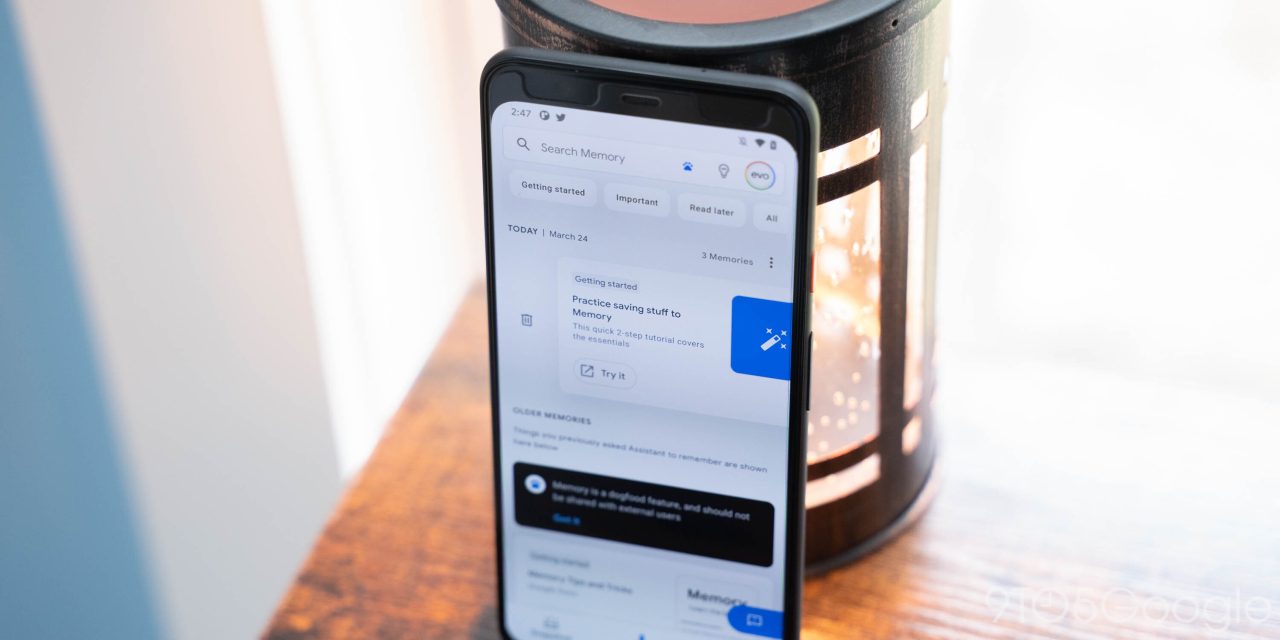 As early as 2018, Google had been readying an Assistant-adjacent feature that supercharges saving and reminders on Android. It now appears that Google is no longer working on “Assistant Memory” as the company’s reminders strategy becomes ever more muddled.

What is Assistant Memory?

We managed to fully enable “Assistant Memory” in March of 2021 and learned that Google was going to advertise it as an “easy, quick way to save and find everything in one place.” Introductory prompts for the feature officially described it as letting you:

Memory could be activated by an Assistant voice command and would save surrounding context like screenshots, links, and location. Stored things would appear in a reverse chronologic feed as rich cards that provide suggestions to “Search flight status,” “Watch Trailer,” “Open Chat,” “Cooking time” (for recipes), and “Track Shipment.” There was even a rich card for Google Docs.

Organization was handled by a “Topics” tagging system with default categories like “Important” and “Read later.” Meanwhile, there would have been a search bar at the very top of this feed.

Another important aspect was how Google said “Reminders now get saved to Assistant Memory.”

Google app version 13.25, which is currently in the beta channel, deletes the vast majority of strings related to Memory, which was codenamed “stash.” Such a removal is usually a sign that Google has abandoned a feature.

It’s possible that Google is trying to obscure development — as we recently brought it back into discussion — but the company had avoided doing that in the past year. Another scenario is that Memory is moving out of the Google app into a more dedicated experience, but we’ve yet to find conclusive evidence of that.

Reading the tea leaves, the end of Memory could be due to a shift in Assistant’s focus. For example, the recent removal of Assistant Snapshot was evidence that Google no longer wanted to offer that kind of contextual feed experience. The company looks to be focusing Assistant on being a very good voice experience, and paring back on adjacent experiences. For example, there’s Look and Talk to make activating Assistant as easy as staring at your Nest Hub Max, while Quick Phrases will also cut down on needing the Hey Google hotword.

Now what for Google reminders?

The removal of Memory raises many questions about what Google’s plans for reminders are. Users of the current Assistant Reminders experience will soon lose the ability to set location-based to-dos. Assistant.google.com/reminders does not offer a good experience and is very barebones, especially on mobile. Memory was very much seen as a great upgrade.

Meanwhile, we spotted last week that Google Tasks is set to entirely replace Assistant Reminders in Google Calendar for Android. This makes sense for a productivity standpoint and Workspace offering an end-to-end experience, but it has yet to be detailed by Google. Meanwhile, those Reminders remain in Google Keep.

With those developments in mind, Assistant Reminders does not seem to be Google’s future. However, it’s not clear what the replacement is with Memory seemingly no longer in the picture.