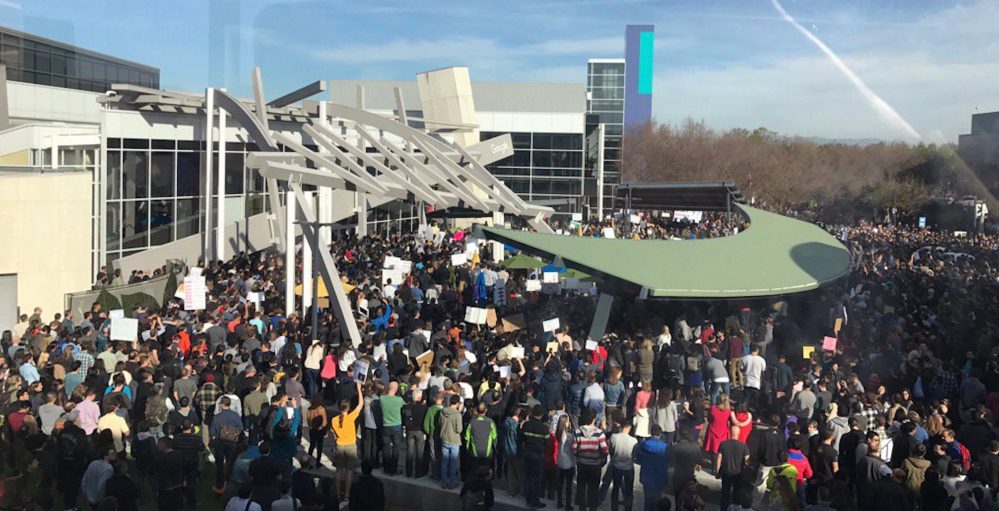 Following Sundar Pichai speaking out against the immigration ruling from President Donald Trump, 2,000 Google employees protested the ruling on the company’s campus today. In a variety of tweets, Googlers shared their images from the protest, which consisted of over 2,000 employees and took place at 8 campuses.

The images were shared using #GooglersUnite on Twitter, showing massive crowds and signs reading things such as, “We are a nation of immigrants.” The protest was organized as a walkout by Google employees, but the company itself supported the display.

In addition to the main Google campus in Mountain View, employees at other campus around the country are also protesting. For instance, Googler Kim Cameron shared images of protesters at Google’s Seattle campus, accompanied with #GooglersUnite and #NoBanNoWall.

The move to protest by Googlers comes after employees raised $2 million that will be distributed to various nonprofit groups working to support refugees. Google itself matched that $2 million raised by its employees.

The protests come after Sundar Pichai criticized Trump’s immigration order and called over 100 employees back to the United States. “We’re upset about the impact of this order and any proposals that could impose restrictions on Googlers and their families,” Pichai said.

View tweets from Googlers at today’s protests below:

Rally sign made from a Corovan box is the most Silicon Valley way to protest pic.twitter.com/teZ4bMsOHL

"It's a debate about fundamental values" sergey brin, Google co-founder and refugee pic.twitter.com/JDBXL77xuY

Google CEO sundar pichai at rally at Googleplex "the fight will continue" pic.twitter.com/cZOfn9FiGY

The @Waymo team joined @Google on campus and heard from colleagues personally affected by the EO #googlersunite pic.twitter.com/tmBnNTik6C