Review: A month with the Samsung Galaxy S5 (Video) 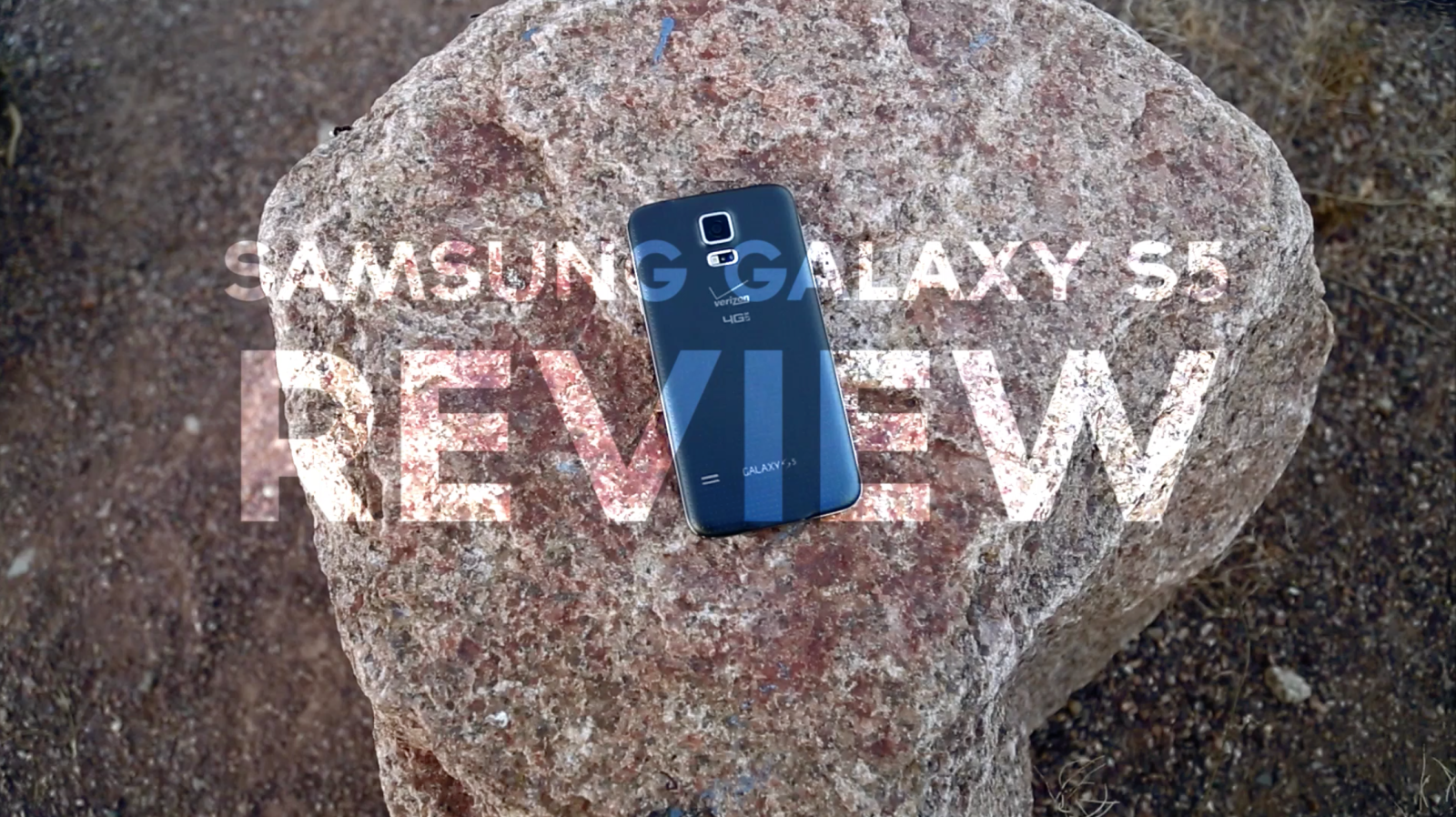 With the release of Samsung’s Galaxy S5, it was clear that the company had decided against reinventing the wheel. The Galaxy S line has been evolving for quite some time now, and more than ever, the smallest refinements make the biggest difference.

Over the past few weeks, I’ve had the chance to really put the Galaxy S5 through its paces. This flagship device may seem like a minor update from the outside, but as always, it’s important to not judge a book by its cover.

Take a look at our full video review below to find out everything you need to know about Samsung’s latest flagship smartphone:

As far as design goes, there’s not much different here, but that’s not really a bad thing in my opinion. Aside from its slightly larger form-factor, the two major differences on the outside are its semi-perforated battery cover and USB 3.0 port along the bottom edge. The backside is home to a 16-megapixel shooter that’s capable of UHD video recording, an LED flash, small mono speaker, and a heart rate sensor that we’ll explore in a little while.

On the front side, you’ll find a 2.1-megapixel camera, earpiece, and the appropriate sensors, along with two capacitive buttons and a home key below the display. Speaking of the display, it’s excellent. This is definitely one of the best displays I’ve seen on a smartphone. Of course, things are a bit over saturated due to the Super AMOLED technology, but it’s certainly not anything worth complaining about. Aside from the slightly disappointing speaker on the back, the 5.1-inch 1080p display is a joy to use when it comes to watching movies, playing games, or just browsing the Web. Since the announcement of the Galaxy S5, I’ve noticed that people tend to bash on its build quality. Sure it’s made out of plastic, but in my opinion, it’s not all that bad. The ergonomics are on point. I think it’s very important to have a solid grip on a smartphone, and thanks to the plastic design, that’s what you get. In my opinion this design feels a bit better in the hand than something slippery like the HTC One (M8). I’m a fan of metal smartphones, and I’d love to see that design philosophy carried over to a Galaxy device, but not at the cost of ergonomics.

With the Galaxy S5, there are three hardware specific features that I’d like to discuss. First off, you may have noticed a small door covering the S5’s USB 3.0 port. Thanks to that port cover and the rubber gasket under the battery cover, the Galaxy S5 is IP67 dust and water-resistant. This allows the device to be submerged in 1 meter of water for up to 30 minutes at a time. That’s definitely a handy feature, but I’m constantly annoyed by the port cover. Maybe it’s a small complaint, but I’d almost rather have an open port than the water resistance and just be a cautious around water like I would with any other device. It’s one of those features that’s only extremely useful when an accident happens … kind of like car insurance.

Up next on the list is the S5’s fingerprint sensor that can be used to unlock the device or make payments via PayPal. I really wanted this to be a viable solution for security, but unfortunately it’s just not consistent. Don’t get me wrong, it definitely works, but you really have to be strict with the way that you use it. Setting up a fingerprint is relatively simple, but you must swipe your finger completely vertically across the home button for proper recognition. Because of this, it becomes more of a tedious process and I’ve had mixed results. At the end of the day, it’s operational, but hit or miss unless you’re very consistent with swipes.

The built-in heart rate sensor is another interesting feature. With the new Gear lineup and revamped S Health app, it’s clear that Samsung has a focus on health. Having a heart rate sensor on the back of a phone is nice, but it’s not something that I used very often. As we explained in a previous article, this functionality is actually available on any smartphone with a camera and LED flash using several apps that are available in the Play Store. I’m not trying to discredit Samsung’s ideas, but I prefer the “always-on” aspect of the heart rate sensors that are integrated into the Gear 2, Gear 2 Neo, and Gear fit. Having this feature on a watch is a smart move, and since it’s always in contact with your skin, there are no extra steps to take in order to track this information.

When it comes to rear camera, the Galaxy S5 is a clear winner. The 16-megapixel camera is excellent when used in the right conditions. I wasn’t a fan of the low-light performance, but aside from that, I was able to capture very crisp and vivid photos without trying. UHD video recording (3840 x 2160) is also available with the camera, but this mode lacks video stabilization. If you’d like to capture stabilized video, you’ll need to step down the quality to 1080p.

The camera also comes with a new Selective Focus mode which will allow you to refocus a picture after it has been taken. In order to take advantage of this feature, you’ll need to enable the mode, then capture a photo with an obvious subject in decent lighting. When used correctly, Selective Focus can produce some great looking images and it’s also fun to experiment with. As mentioned above, the Galaxy S5 currently ships with Android 4.4.2 KitKat. It’s always nice to be up-to-date with these kind of things, and because of this, you’re getting a smooth experience. Samsung’s TouchWiz skin also received a slight makeover on the Galaxy S5, and overall, a lot of the issues I’ve had with it in the past have been corrected. You’ll find the occasional lag here and there, but in my experience, I’d really have to be nitpicking to call it an issue.

Scratch that, let’s nitpick. One of my biggest complaints within the user interface is the painfully slow animation when swiping over to Samsung’s Flipboard-powered reader, My Magazine. It’s just too slow for me. This has absolutely nothing to do with the device’s performance, it’s literally just the stock animation speed. I’m not sure how that decision was made, but in comparison to the other animations throughout Android and TouchWiz, this one is noticeably slower. Luckily, if you’re not a big news reader, My Magazine can easily be disabled within the Home Screen Settings. Some of the features that I found to be the most useful are conveniently located within the Notification Panel. Toolbox is probably one of my favorite software-based features from Samsung. When enabled, a small folder-like circular icon will appear on your screen that can be filled with up to five shortcuts to your favorite apps. Toolbox can easily be moved around the screen with a drag of your finger and will follow you within the OS and semi-transparently rest on top of any content or apps. If you’re looking for a great way to keep your photos, videos, or files on lockdown, Private Mode is a great feature. This mode uses an authentication method to store selected content in a private inaccessible area of the device’s storage. If you need to view your private content, pull down the Notification Panel, enable Private Mode, and authenticate it with a password, fingerprint, or pattern. The hidden content will instantly reappear for management or viewing. Last on my list of favorable software features is Ultra Power Saving Mode. If it’s going to be a while before you can make it to a charger, Ultra Power Saving Mode will extend your S5’s standby time up to 24 hours once the device reaches 10 percent battery life. This is possible thanks to the AMOLED display, user interface restrictions, and feature simplification. Basically, you’re left with a grayscale display and access to a few important features like the Phone app, Messages, Web browser, and some custom options. You won’t want to use this mode under normal circumstances, but it’s very helpful if your phone is dying and you’d like to keep it alive until the next charge.

I’d also like to touch on battery life. This is one aspect that I tend to stay away from in reviews because usage can drastically vary between users, but I didn’t notice anything abnormal. It was never a thought throughout my daily activities. With my average to heavy use, I had no problems making it through the day.

I realize that I didn’t point out every feature included with the Samsung Galaxy S5, but I wanted to touch on the main points that I feel would make or break a purchasing decision. I think the Galaxy S5 is great device and a worthy upgrade over its predecessor, but as I mentioned, there are definitely a few things that I’d like to see ironed out. This isn’t a reinvention of the smartphone, but a redefining moment for a great flagship device. I’m not a fan of every feature included, but for the most part, Samsung has done away with a lot of the bloat that I’ve complained about in the past. This leaves us with a device packing high-end specifications and the desirable functionality that Samsung does best. I would like to see a different approach for the Galaxy S6 though.

Personally, I’m glad Samsung didn’t attempt to reinvent the wheel, but at the end of the day, are the small software additions and hardware specifics enough to warrant an upgrade? That answer will vary from person to person, but in 2014, the Galaxy S5 is definitely a worthy contender in this dog-eat-dog smartphone race.

If you’d like to find out more about the Samsung Galaxy S5, visit its official landing page or find pricing and availability here. Also, be sure to check out our budget accessory round-up for the Galaxy S5 and full comparison to the HTC One (M8).