The Acer C731T, otherwise known as the Chromebook 11 N7, is an education-focused laptop targeted towards students with simple needs and an eye for durability. Powered by Chrome OS, it won’t run professional-grade software like Photoshop or After Effects, but it still makes a good companion for those living within Google’s ecosystem.

The design of the Chromebook 11 N7 is anything but exciting. Its 2.98 lb plastic chassis has plenty of give with pressure applied to almost any point, but that’s partially for durability’s sake. This Chromebook is MIL-STD 810G certified, meaning that at least on paper, it should be able to withstand drops from up to 48 inches/1.2 meters. There’s also a “gutter” system within the keyboard that’s able to drain up to 11 ounces of water in case of a spill.

The 11.6″ IPS display is dim and easily washed out in direct lighting, but looks a touch better than its 1366 x 768 resolution would suggest. Touch sensitivity is surprisingly good, and much more responsive to multitouch than the trackpad. Speaking of — the trackpad is smooth and works well for cursor movement and two-finger scrolling, but falls apart with very hit-or-miss sensitivity to two-finger “right clicks.” 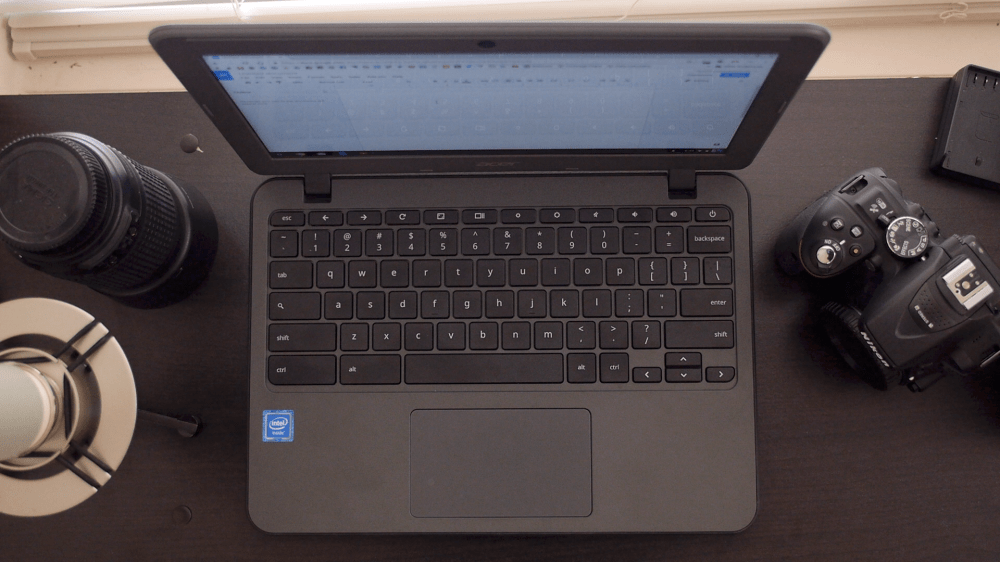 Under the hood, the C731T (the “T” refers to its touch screen — there is also a non-touch model) sports a dual core Intel Celeron N3060 clocked at 1.6 GHz, and 4 GB of DDR3 RAM. You’re only given 16GB of internal storage, but given the cloud-centric nature of Chrome OS that should be plenty of space for most users. There’s also an integrated Intel GPU inside, and a 3,980 mAh lithium polymer battery powering it all.

There’s a decent amount of ports on the C731, including two USB 3 ports, HDMI, an SD reader, and a headphone jack. Sadly there are no USB-C ports to be found, and the charger instead is a proprietary cable. It would have also been nice for Acer to have included an Ethernet port (or at the very least an adapter), but the built-in WiFi 802.11 ac connectivity is good to see. Chrome OS on the C731 is, as always, clean and simple. Upon the first boot, you’re prompted to sign into your Google account, after which you’ll be greeted with all of your bookmarks, Chrome plugins, and passwords from other Google devices. Like most other Chromebooks (with the exception of a few recent Samsung models), the C731 is limited to only being able to run web apps within Chrome, but Android app compatibility will be coming soon.

Performance on the C731T is typically fairly smooth, though with a dated processor on board it’s easily overburdened by media-heavy web pages. You’ll also bog it down from time to time if you’re an especially fast typist; I found myself waiting on the laptop to catch up with my typing on more than one occasion, which is too bad since the keyboard is actually pretty nice and easy to type on. The C731’s speakers get surprisingly loud, though the audio quality leaves a lot to be desired. Their placement on the bottom of the chassis also make them easy to accidentally muffle with your lap … you know, where a laptop usually goes.

Battery life is the highest point of the C731’s user experience, providing a terrific ten to twelve hours per charge. It’s still a shame that Acer used a proprietary charging cable, but it at least charges fairly quickly — two hours should be enough to charge up from an empty battery.

It goes without saying that the C731 isn’t for content creators. The nature of Chrome OS is heavily rooted in cloud storage and web apps, and as such it’s not supposed to run heavy duty programs.

On the other hand, for the busy student who constantly runs between classes and is comfortable working off of Google Docs and other productivity apps within the Google ecosystem, there’s a certain peace of mind that comes with a tough and rugged laptop that you can throw around, even in the rain. Sweeten the deal with excellent battery life and a low cost of entry, and the C731T makes a great budget laptop.