After rolling out to Android, Mac, Windows, and Linux, version 74 of Chrome OS is now available. Notable features include a new unified search that redesigns the Assistant experience. Other additions include PDF annotation tools and folder creation in My Files.

Search in Chrome OS 74 has been redesigned with a better combined experience for device, web, and Assistant lookups. Tapping the search field — without entering any text into the box — will display app suggestions and show your past queries. Hovering over any item in history will let users quickly delete it from their account following a confirmation prompt.

Google Assistant will attempt to first perform the search and display results inline. A query for the weather will display the temperature and forecast directly in this interface, while more general ones will be kicked out to Google Search on the web in a new tab.

While Assistant (when launched from the dedicated shortcut on a Pixelbook or Pixel Slate) was originally a floating dialogue, it’s now integrated into the general Chrome OS search experience for a more unified experience. Assistant benefits from being displayed against a somewhat blurred, transparent background.

The Chrome OS PDF viewer now features built-in annotation tools. Markup options include a pen and highlighter that allows for multiple colors and adjustable stroke width. There is also an eraser and redo/undo buttons, with this feature very useful in conjunction with styli, pens, and of course your finger or mouse. 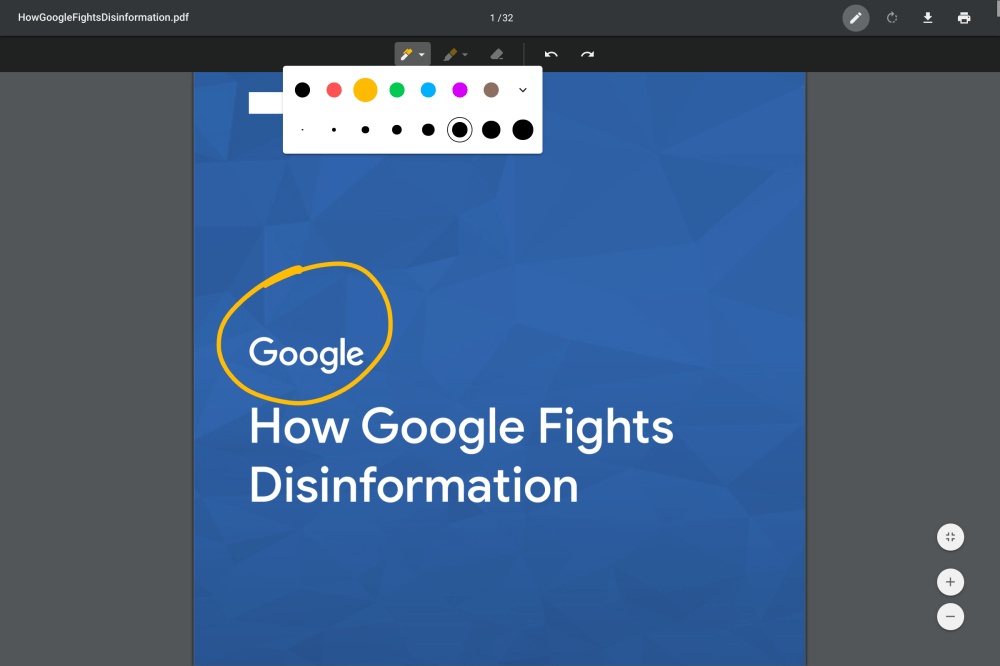 Instead of a gear icon in the bottom-right corner of the New Tab, there is a new “Customize” FAB to set a Chrome background or upload your own image. There are also controls to restore the default web shortcuts and New Tab wallpaper.

Chrome 74 prevents pages that are being closed (or replaced) from opening a popup. Specifically, “pages may not use the window.open() API to open a new page during its unload.” The browser’s popup blocker already prevented this, but this behavior in now prohibited regardless of whether the blocker is enabled.

Chrome OS 74 is rolling out now and will be available for all Chromebooks over the next several weeks.