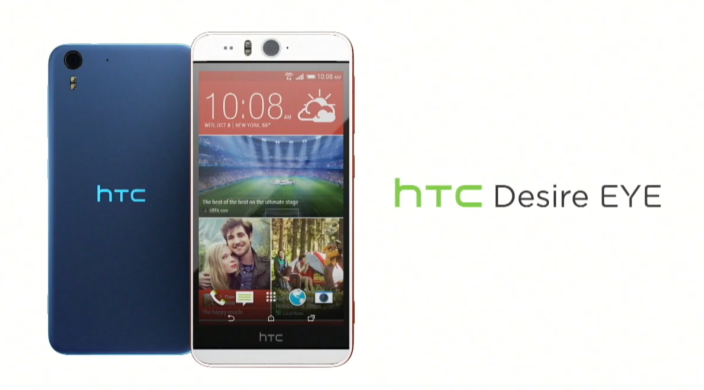 On stage in New York City during its Double Exposure event, HTC has just unveiled the Desire Eye. Looking much like the leaked renders and press shots we saw earlier this week, the device features a 5.2-inch full HD display with BoomSound speakers.

The big selling points of the device, however, are its camera features. On both the front and back you’ll find 13MP cameras with dual color LED flash and wide angle lenses. The device is also IPS7 water resistant, meaning that it can be submerged in 1 meter of water for up to 30 minutes. The device carries an all-aluminum, unibody design, as well, similar to the One (M8). It weighs in at 154 grams and is 8.5mm thick. The device is powered by a 2.3GHz quad-core Snapdragon processor, 2GB of RAM, and a 2,400mAh battery.

The Desire EYE will come with a variety of camera enhancements, most of which apply to selfies and the front-facing shooter. HTC calls this the EYE Experience. For instance, when you’re video chatting, the camera can detect up to four faces and display each in their own frame. Face Fusion allows you to merge two faces to together, which HTC says you should use before deciding to have kids with your significant other. Split Capture lets you take a rear picture and a selfie and merge them. Photo Booth takes four pictures and puts them into a photo booth frame. Finally, Live Makeup makes you look prettier. Supposedly. Maybe.

Other phones, including the M7, M8, One Mini, Mini 2, and Butterfly 2 will receive updates to add the EYE Experience to their device over the coming month.

Check out HTC’s unveil video for the device below: