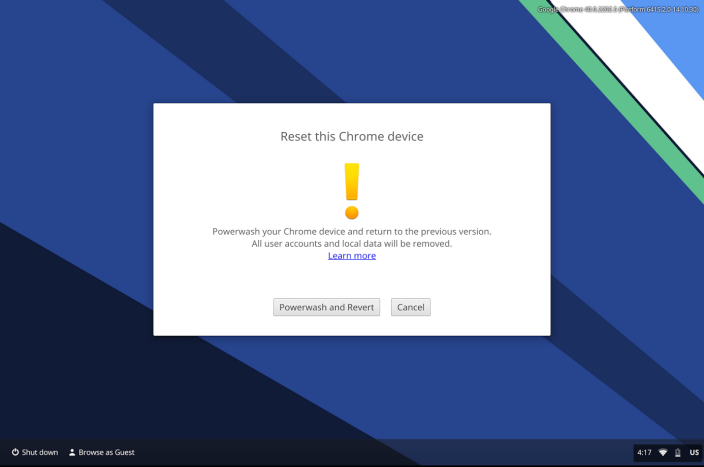 Googler Francois Beaufort points out a feature in the latest Dev build of Chrome OS that will let users easily revert to a previous version of the operating system. The feature, as Beaufort points out, will come in handy for users that update and for whatever reason find themselves wanting to revert to version of Chrome OS previously installed before performing the update.

Let’s say you update to a version of Chrome OS that doesn’t work well for you and you’re kinda sad. Until now, you either had to wait for the next update or go through the recovery process. Bummer! But it’s over!

The new revert feature, which is currently only available in the Developer build of Chrome OS, is available from the bottom of the Chrome OS Settings page. Beaufort explained how it works: “Scroll to the very bottom, click on the “Powerwash” button and restart to reset your device to be just like new. Then, here’s the magic trick, on the reset screen, press simultaneously <Ctrl> + <Shift> + <Alt> + R to reveal the brand new “Powerwash and Revert” button.

Pushing the revert button will also wipe “all user accounts and local data.” It’s possible we’ll see this feature headed to all Chrome OS users in the near future.