Today, Google announced that a slew of new apps are coming to the Chromecast, bringing Google’s TV-connected dongle closer to the Apple TV and Roku in terms of the number of services it can stream. Part of today’s update are both Showtime Anytime ad Starz Play, two services that—like competitor HBO Go—offer a variety of premium movies and TV shows that you can’t find anywhere else.

Notably, the first of these two services has been available on competing platforms (Apple TV, Amazon Fire TV, Roku) for quite some time, but the addition of Starz Play actually brings an exclusive to the Chromecast. To set up one or the other (or both), you’re going to need a valid login for the cable subscription on which you’re subscribed to each service’s respective channel.

Additionally, today came with the announcement of a bunch of third-party games that also now offer TV-sized Chromecast support. Of the games on this list are Wheel of Fortune, Hasbro’s Monopoly Dash, Scrabble Blitz, Connect Four Quads, Just Dance Now, Emoji Party, and Simon Swipe. Another app, Big Web Quiz, actually uses Google’s knowledge graph and seems to have been made by Google itself (although the game isn’t yet online at the time of this writing).

Finally, Google also did us the favor of updating the Chromecast apps website to be more easily navigable, something that has been necessary for quite a while and comes at an appropriate time alongside the launch of all of these Cast-capable apps. There are now category tabs to keep the apps organized, including TV & Movies, Music & Audio, Games, Sports, Photos & Video, and More. 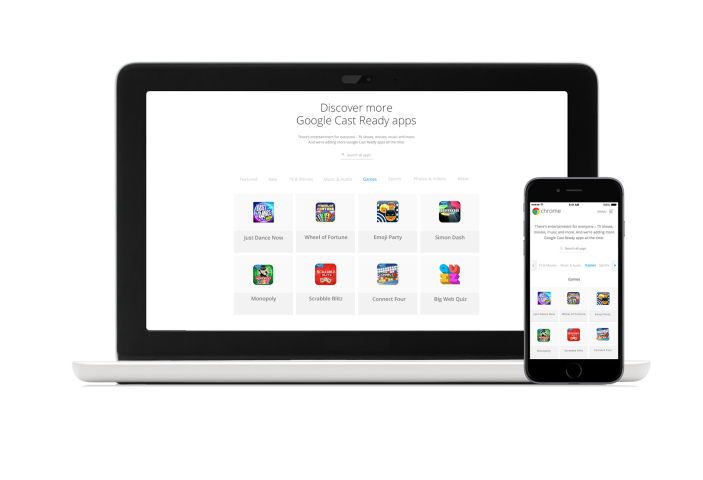