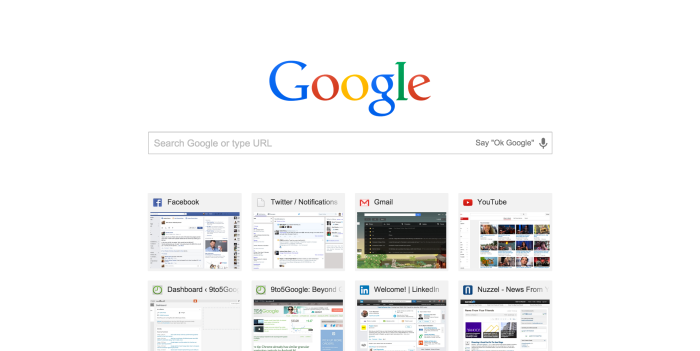 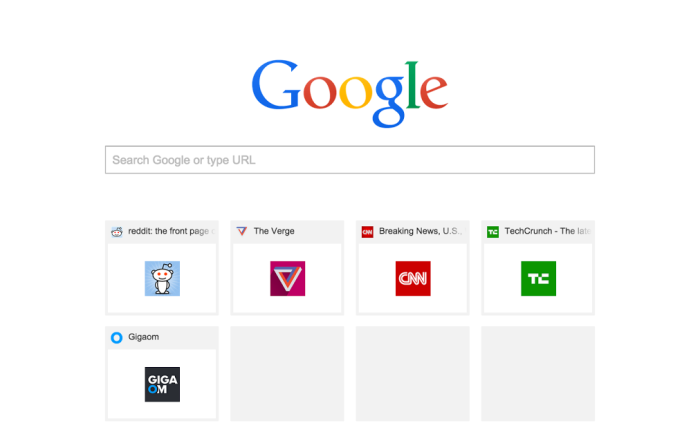 We learned back in March of an experimental feature the Chromium team was testing in its canary channel that replaces the thumbnails of your most frequently visited sites on the New Tab page with simpler large icons (the site’s respective favicon) for each site. The thinking goes that the screenshot Chrome takes of the sites you frequent don’t always look great, and sometimes the browser’s cache of screenshots doesn’t refresh for a while, so large icons prove to be a much cleaner solution.

Above you can see an example of the current desktop New Tab page on the left and the new suggested page on the right. Now, though, the change can be enabled in Chrome 44 beta for Android…

When we saw this change for desktop we learned that Google was considering using the first letter against a colored square as a fallback in the event that a site doesn’t have a large enough favicon, and it looks like they’ve gone ahead with that. Of course that could change as this is still in beta.

Enabling the New Tab page is pretty easy. All you need to do is download Chrome Beta from the Play Store, type and enter chrome://flags into the Omnibox (the search box), and an option titled “Enable large icons on the New Tab page” will appear. Change this setting to “Enabled” and the next time you open a new tab in Chrome, voila! Here’s what that setting looks like:

What do you think of this New Tab page? Do you like it more than the current one?