Google has just announced a new beacon technology called Eddystone along with APIs that will together make it easier for devices in close proximity to communicate. Essentially, these technologies will make it as easy for devices to communicate as it is to turn to a person next to you and talk in the real world.

Let’s start with Eddystone. Google says Eddystone is “an open, scalable [Bluetooth Low Energy] beacon format to quickly deploy real-world context to applications.” To break that down a bit, the Eddystone format (a language beacons send out their messages in) is available now as an open source project on Github so manufacturers of physical beacon hardware can access and use it in their beacons (new ones, or existing beacons can be made Eddystone-compliant through a firmware update), or contribute back to the project with new code and comments. Eddystone is an attractive out-of-the-box option for manufacturers who may not want to write their own software: it’s extensible, meaning new functionality is easy to add; it’s scalable with related APIs that manufacturers can utilize to create beacons to be managed at scale; and it’s capable of communicating with any device, iOS and Android included, that supports BLE.

Let’s put an example to Eddystone: an owner of a football stadium has thousands of hardware beacons scattered all over their grounds for doing things like alerting attendees to the end of halftime. Through a combined use of both Eddystone’s “telemetry frame” and the new Proximity Beacon API, also released today, that owner can easily monitor all their beacons for health and displacement (i.e. getting knocked over) issues, and know exactly where the working, broken, missing, or displaced beacons are in their giant stadium. The Proximity Beacon API does a lot of the lifting here, giving developers the ability to associate latitude/longitude and related data to a specific beacon, the data of which is stored in the cloud so beacon owners can do things like know where an offline beacon is and have important information sent to the devices of those passing by.

With the new Eddystone technology, manufacturers get immediate access to an open, plug-and-play platform for their beacons, hopefully bringing us closer to a world blanketed in beacons in the process. But the goal outlined by Google, as mentioned at the top, is to make communication between nearby devices as easy as talking to a friend standing next to you. And beacons are only useful when they can actually send data and information between devices and people.  So Google is releasing one new API and highlighting another that together support the actual creation of good close-distance communication experiences, both under the “Nearby” moniker.

Nearby Messages (which will be included in Google Play services 7.8 and available on iOS soon) through the use of Bluetooth, WiFi, and inaudible sounds (as used in Chromecast and Google Tone, for example) can establish proximity between devices (i.e. Android devices, iPhones, beacons). Once it’s established that two devices are nearby, the API is ready to share messages in a way “that’s as frictionless as a conversation.” Nearby Connections, which has already been available for some time, enables developers to recognize and communicate with other devices on a local network. A use-case Google provides for this is multiplayer gaming on an Android TV, where multiple people could join in, using their phones as control pads while the game itself is displayed on a nearby TV set.

In a blog post about the new Nearby APIs, Google shared a few examples of Android apps that are using the APIs to create proximity-based experiences. One example is Edjing, an app using Nearby to let DJs publish their tracklist to people around them, and have those nearby vote on the tracks they like most — Perhaps so a DJ can determine in real-time what they should play before they go on. 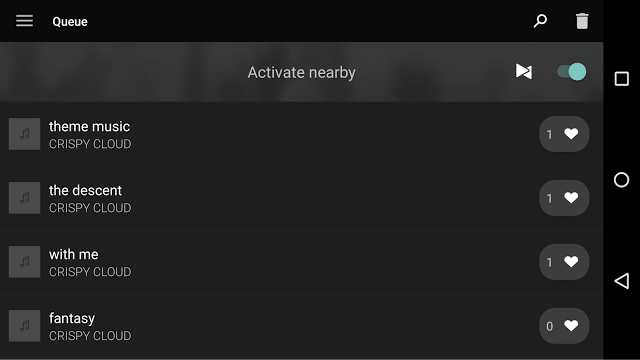 Google’s new Nearby APIs are undoubtedly great offerings. We’ve seen countless apps and services, notably Pushbullet, BitTorrent Shoot, and even Snapchat come up with new ways to transfer information between nearby smartphones and tablets (like with QR codes, interestingly enough). And since Nearby is cross-platform it should be an easier sell to developers than a technology which isn’t so agnostic, as they could implement cross-device sharing functionality in less time than it would take to juggle dealing with two or more technologies.

Eddystone is arguably more interesting, however. Beacons are in such a nascent period of their lives that there are countless companies – Estimote, Apple, for example, and now Google being another — pushing their own wares for brick and mortar businesses to adopt. But the market is still small – I don’t remember the last time I interacted with a beacon. Manufacturers and app developers alike have to decide which technologies to adopt, as beacons traditionally work by beaming out a numeric identifier which app developers link to a piece of content and push in their app when the smartphone user walks by the associated beacon. Estimote even has its own proximity APIs in its beacons alongside support for iBeacon and Eddystone, for example. Other beacons can recognize different attributes in a device like how fast its moving and its temperature. Not all beacon hardware is equal.

With Eddystone’s accessibility, though, manufacturers get a solid base upon which they can focus on adding their own differentiating features and build the best, most reliable and attractive hardware. It also tremendously reduces costs that otherwise would have gone into writing the software from scratch. Eddystone seems to really have the potential to get more beacons into the world and combined with Nearby, make for a near frictionless flow of information in the real world.