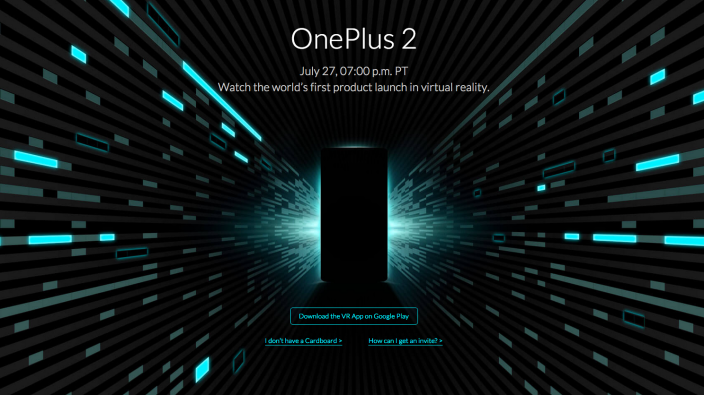 Update: OnePlus has also launched its invite page, where you can add your email address to the reservation list. Head on over to OnePlus’ site and read more about this year’s invite system.

OnePlus has been teasing us for weeks, or even months, about 2016’s “flagship killer”. The OnePlus Two is going to be announced at an event on Monday, July 27 from 7PM Pacific Time, and will be the first smartphone announcement to use Google Cardboard VR to enhance the experience. OnePlus has been sending out its own Cardboard units to fans and members of the press, and now the viewing app has finally hit the Google Play Store.

If you have an existing Cardboard set, or one of OnePlus’ bespoke ones, you’ll be able to make full use of the VR app and get immersed in the experience. If you don’t have Cardboard, you’ll still be able to take part and watch a non-VR version of the event. The app is free to download and works with smartphones running Android 4.1 or later.

In the Play Store description, the company states:

Product launches tend to be the same. An auditorium, a keynote, and a seated audience. For the OnePlus 2 launch, we didn’t want a barrier between us and our community; we want to invite you into our world, because you’re a major part of it. That is why we will be unveiling the OnePlus 2 in a VR experience. Starting July 27 at 7:00pm PST, everyone around the world can stream our launch.

OnePlus’ founders are somewhat unconventional, so it makes complete sense that the company itself likes to go against the flow. Saying that, I’m not looking forward to being up at 3am my time to watch the event live. I’m gonna need a lot of coffee on Tuesday morning. That said, I’m definitely looking forward to what sounds like a beast of a smartphone.

OnePlus Two is going to be equipped with a 13MP, f/2.0 camera, 4GB RAM, a revised Snapdragon 810 processor, a huge battery and refreshed aesthetic. It’ll be smaller than the OnePlus One, but will almost certainly cost more. We only have a couple of days to wait now, but in the mean time, make sure you’re ready and go download the app.