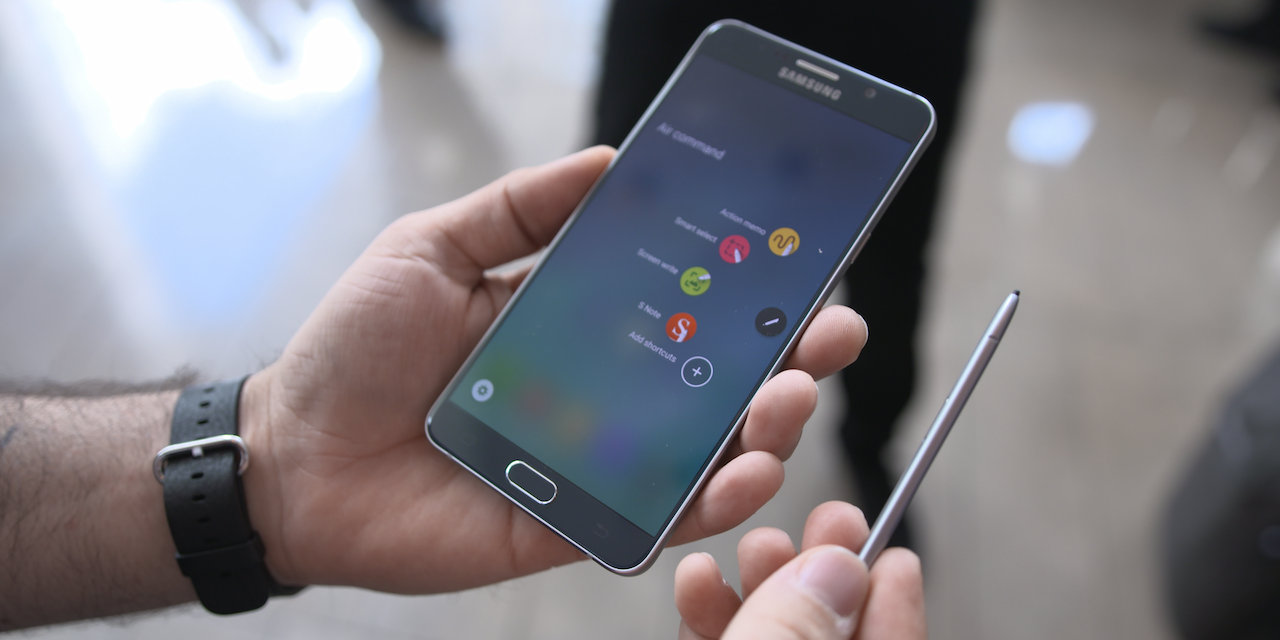 Samsung’s Galaxy Note 5 is officially official, but what makes it such a great upgrade over its predecessor? Some may argue there’s not much, but Samsung has made improvements in some areas and compromises in others that you may want to know about before buying one. These are the top 5 features on the Galaxy Note 5…

Depending on how you look at it… The design can be a top feature. It’s similar to what we’ve seen with the Galaxy S6 and S6 Edge earlier this year. I’m a fan of the new design, but it’s definitely more fragile than last year’s plastic back design. The rigid metal frame feels great in the hand, though, and the backside edges feel like resting a cool glass butt (really!) in your hand thanks to the curves.

This is a massive design change for the Note lineup, but it now fits in with Samsung’s motives for future smartphone creation. At the bottom, there’s an S Pen that sits flush with the device and can be accessed with a simple push. As far as design goes, it’s definitely a premium look and feel all around, but unfortunately this means that your battery is sealed in and it won’t include Micro SD card expansion, but for more information on specs, be sure to check out our first impressions video.

Check out our Galaxy Note 5 top features video below:

As we expect with the Note series, there’s an S Pen and some very specific features that come along with that. For the most part everything is the same as previous iterations of S Pen software with some enhancements here and there. Screen-off Memo will allow you to pull out the S Pen with the screen off and write on a black slate, and Scroll Capture which will piece together captures of a page for a longer note. You can also add app shortcuts to the Air Command menu now as well.

The S Pen is for a very specific type of person and if you’re not into the whole stylus thing, you may want to check out the Galaxy S6 Edge Plus which offers a comparable screen size and features without the pen part of the deal.

Samsung is leading the pack when it comes to camera performance. The Galaxy S6 features one of the best cameras on a smartphone and I expect no less here. Of course, long-term use will tell us more about this and the rest of these top features, but I think it’s safe to say that with Samsung’s 16-megapixel rear shooter with optical image stabilization and up to 4K video recording, we should be just fine. If you need to take a selfie, Samsung has you covered with a 5-megapixel front-facing shooter.

Samsung flagships are nearly famous for their display quality these days. Not only does Sammy kill it with camera quality, but they murder the display scene. The Galaxy Note 5 features a 5.7-inch QHD Super AMOLED display and just like the S6, S6 Edge, and well even the Note 4 and Note Edge, this display looks so crispy. You won’t be disappointed at all.

Yes, I know you normally wouldn’t consider TouchWiz as a top feature, but as with the Galaxy S6, TouchWiz is a joy to use this time around. No more lag and bloated software cluttering up your device. It’s safe to say that Samsung has finally nailed down the right formula for its Android skin.

Stay tuned for our full review and if you want to find out more about Samsung’s Galaxy S6 Edge Plus or Note 5 be sure to check out our hands-on videos linked below: