Review: Samsung’s Galaxy Note 5 has the beauty, brains and brawn, but not without compromises [Video] 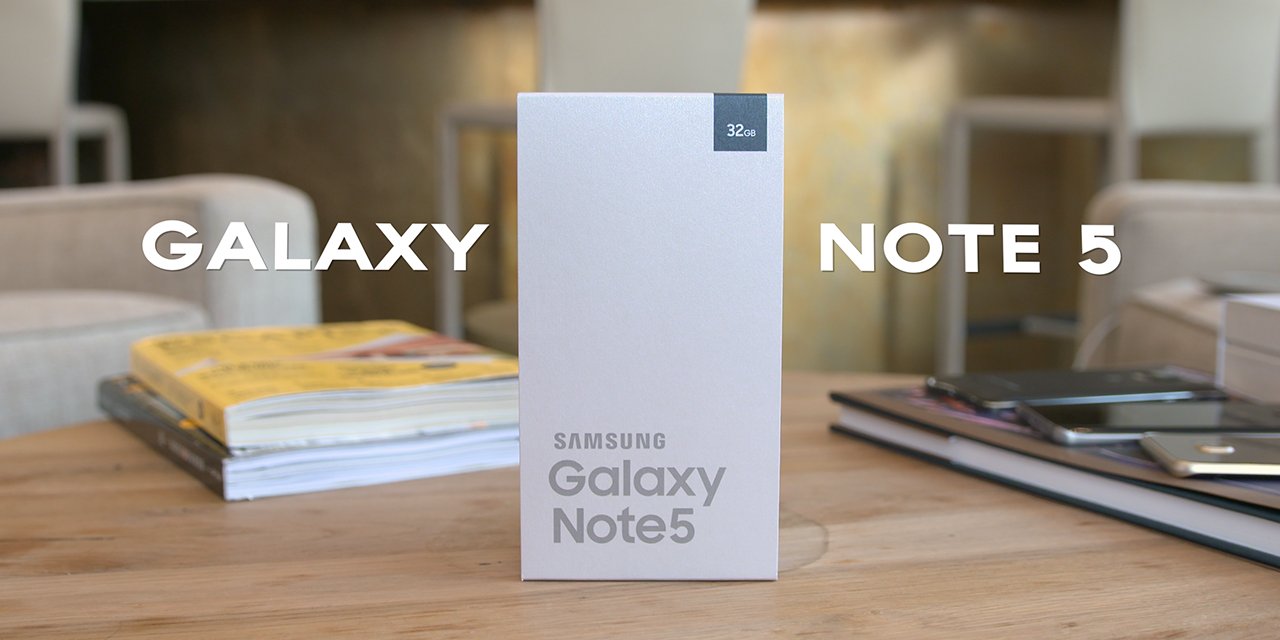 There’s no denying the beauty of Samsung’s latest Note iteration. The Note 5 is simply amazing when it comes to its form, but how does that affect function, if at all? Today, we’re going to find out. The Galaxy Note 5 was unveiled and released within about a week and it seems to be the talk of the town in the mobile tech space, both good and bad.

Samsung’s previous iterations of the Note’s design have been more evolutionary than revolutionary, but this year that all changed. We now have a device that’s built from metal and glass, much like its smaller brother the Galaxy S6. It may prove to be quite fragile if you drop it, but damn it feels good in your hand…

Most of this design language is old news in terms of Samsung smartphone releases, but there are a few key changes to point out. This year Samsung added a touch of curvature to the Note series, but not where you’d expect it. The rear glass panel has curved edges much like the front of the S6 Edge (and now Edge+). It’s an interesting design choice because it really makes sense and is very comfortable to hold.

Glass is glass though and because of that + the curves it’s a little slippery. Oh, and it’s a fingerprint magnet, but that’s old news. Still I can’t stand wiping off fingerprints all day long, so I covered the backside up with a skin to keep it clean.

Check out our Samsung Galaxy Note 5 review video below:

The S Pen has also been changed for the better (or worse depending on which way you put it in.) The S Pen sits nearly flush with the bottom of the device and can be removed from its silo with a simple press or click or its top end. It’s certainly a very satisfying click and something that can be somewhat habit-forming if you’re into that kind of thing.

But more important than the things being added with this fresh design, there are a few important things that were laid to rest. First up, say goodbye to your precious IR blaster, because it’s gone. There’s also no replacing the 3,000 mAh battery inside or expanding the storage via Micro SD card because, well, everything here is basically taped together with some very strong adhesive. Yes, I agree this sucks, but complaining about it won’t bring it back. It is what it is, like or not. At the end of the day, Samsung has built a very pretty phone. Solid frame, slick curves, glass walls, and basically a Notified Galaxy S6. And I’m okay with that for now. If you’re not, I’m sure there are some pretty good deals going on with the Galaxy Note 4 right now.

Around the front side, we have a beautiful 5.7-inch QHD Super AMOLED display. Hands-down, this is the best looking screen on a smartphone. It’s that good. It’s super responsive, colors are crispy and vivid, and it’s eye candy to look at. Above that display we have a 5-megapixel front facing camera and along the bottom half, there’s still a home button with a fingerprint sensor which works pretty good and is identical to what came along on the Galaxy S6 and a couple of capacitive navigation buttons.

Around the backside, we have a 16-megapixel camera that’s quite possibly the best on a smartphone, but more on that later. You’ll also find a heart rate sensor, which I rarely use, and an LED flash. As far as hardware goes, Samsung’s Galaxy Note 5 appears to be the full package.

Powering this beast of a smartphone is the Exynos 7420 octa-processor, 4GB of RAM, and 32GB of storage in the base model and tops out at 64GB in the high-end model. The major downside here is that what you see is what you get. No more expandable storage which isn’t a deal breaker, but definitely sucks. 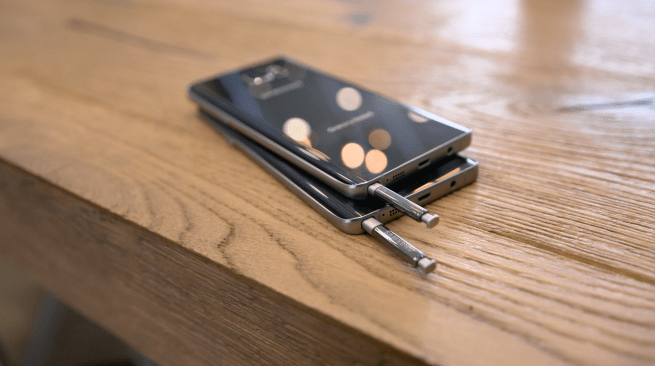 The Note 5 ships with Lollipop and everything is very smooth as far as software is concerned. The internal specifications handle just about everything you’d need and I’ve had a very fluid software experience, especially compared to the Note 4’s iteration of Android and its skinned features. Software elements are a bit different from previous Samsung devices, but if you’ve used one before you’ll have no problem navigating it. This is the most spec’d out version of a Samsung phone that we’ve seen and its performance matches up with those specs.

S Pen and other features

I’ve never been a huge fan of the S Pen, but there’s one feature this time around that has sold me on it altogether. Samsung has implemented a new Screen-off memo software feature that will allow you to quick take notes without even unlocking the device. It’s a major win in my opinion and I’ve been using the S Pen more than ever before because of it. It’s the simplest form of writing down a note quickly and I love it. 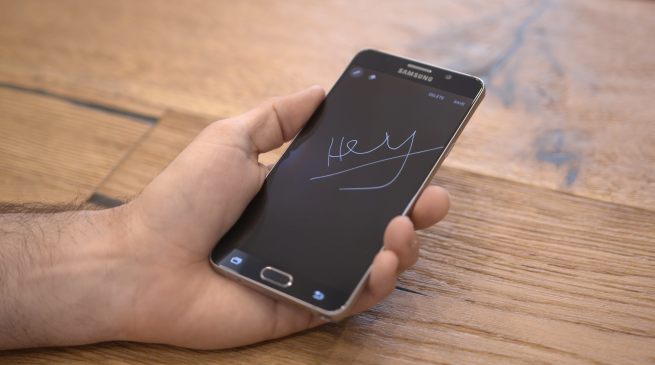 Along with that, you also have the ability to take stupid long screen shots using Scroll Capture. Instead of taking multiple screenshots to capture on long webpage or document, the Note 5 can automatically stitch together a grouping of them. From there you can save it or share it and even take notes on top of the photo using the S Pen.

In the pop-up Air Command menu, Samsung has added the ability to store up to three app shortcuts as well. It’s not as helpful as I hoped, but it’s another new feature to sell you on the upgrade. I’d just prefer to tap the app on my home screen instead of pulling out the S Pen to launch it, but it’s helpful if you keep any pen-related apps there for easy access.

As for camera performance, this thing is a boss all around. It’s safe to say that at this very moment in time Samsung has the best camera on a smartphone. Hands down. There’s nothing that comes close. The Camera app launches almost instantly by simply double pressing the home button. Picture taking is super fast and it really makes it easy to get the shot you wanted the first time.

This 16-megapixel shooter with optical image stabilization works wonders in the photography department. Pictures are stunning and low light performance is at it’s best. This sensor may be the same when compared to the Galaxy S6, but with enhanced stabilization across the board here, there’s no stopping this beast.

I put together a full gallery of photos taken with the Galaxy Note 5 that you can find below. Words do it no justice. It’s pretty amazing for a smartphone camera.

Along with crispy photos, we also have video recording up to UHD resolution and the optical image stabilization keeps everything smooth in this department as well. This camera is a joy to use all around and will be my first pick to snap a photo for a while.

Moving along to battery life, it’s been super inconsistent in my testing. I’ve been using the Verizon, T-Mobile, and AT&T variants of the Note 5 to see just how different the results were between carriers and I was surprised. T-Mobile was the most inconsistent of all coming in between 2.5 and 5.5 hours of screen on time in my testing under moderate use, I’ve had really mixed results. This is all dependent on signal strength, screen brightness, and other factors though so your mileage may vary. It started to get better towards the end of my testing and closer to what I expect.

The AT&T and Verizon models were more consistent at an average of 5 hours of screen on time after disabling some unnecessary bloatware. Keep in mind these are all averages so some days were definitely better than others. The good news is that the Note 5 charges up quickly with Fast Charging and even faster wireless charging which will fill up the device from zero to 100 in 120 minutes.

So what’s the end result here? I’m not a huge fan of the fragile glass and metal design, but I’d be lying if I said it didn’t look good. This is one of Samsung’s best smartphones (as it should be). Sadly, Samsung has alienated some of its power users by sealing up the battery and removing SD card expansion in favor of a super fragile design. Is it worth the money? Well, that’s somewhat subjective. This is a great phone, with and amazing camera, and for the most part pretty solid battery life when it’s consistent.

Should you buy it? If you need an S Pen in your life, I’d say to go for it. That’s the main selling point here. If you just want a big screen and a battery with Samsung features, you may want to check out the S6 Edge+ and make sure you subscribe for our review of that in the near future. I’m a fan of the Note series this year, but I can live with the compromises being made. The question is, can you?