Ratings and reviews each receive a new dedicated page in the Developer Console. Developers will be able to see ratings over a daily, weekly, and monthly period and see how they correspond to new versions and updates. Additionally, they will be able to break down ratings by country, language, device, app version, and Android version.

Over the past few months, Google has begun listing review highlights on an app’s Play Store page to help consumers see common topics and comments about an app without having to read all the reviews.

The new reviews page will now show developers the same highlights seen by users. Google notes that highlights are updated regularly and only show up when an app has a high enough volume of reviews. The page will also show device data such as RAM, CPU, and screen size from reviews. There is also a new search functionality and the ability to receive emails when a user updates a review.

These changes should be live in the Developer Console now. In other related news, Google is nearly finished with a major update to Android Studio that allows developers to run code changes immediately and adds a better device emulator. 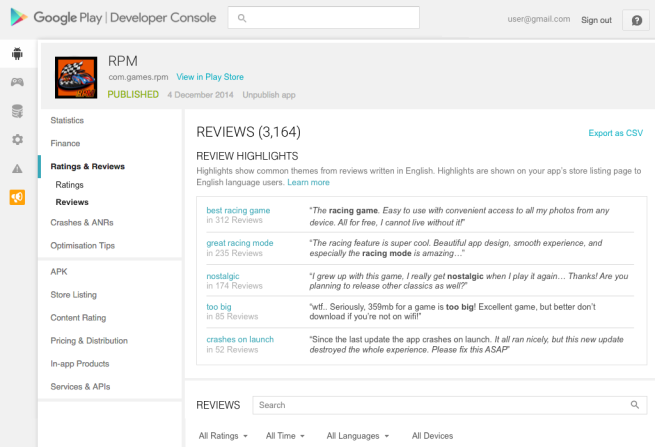