Following the final N Developer Preview in July and as noted by another rumor, Android 7 should launch this month. A Software Update Schedule from Canadian carrier Telus points to Monday, August 22 being the precise date for when the Nexus 5X and 6P will receive Nougat.

Found on Telus Forums, the list is maintained by several community managers and was just posted/updated yesterday. It also includes when other devices, like the Nexus 5, 6, and a variety of Samsung devices, will receive regular security patches. For the August Nexus patch, it accurately lists the first of the month versus the rumored August 5 date.

The target launch date for the Huawei Nexus 6P and LG Nexus 5X to receive the Android N update is August 22. Interestingly, the Nexus 6 is not listed, even though it has received all five Developer Previews and is expected to be updated to Nougat. The schedule notes that “all dates are approximate and subject to change.”

With it being a month since Developer Preview 5 and a 4-6 week time frame for each update, a release should be imminent. A leaked build of Nougat for the Huawei P9 has leaked and LG has already started a preview program for the G5. 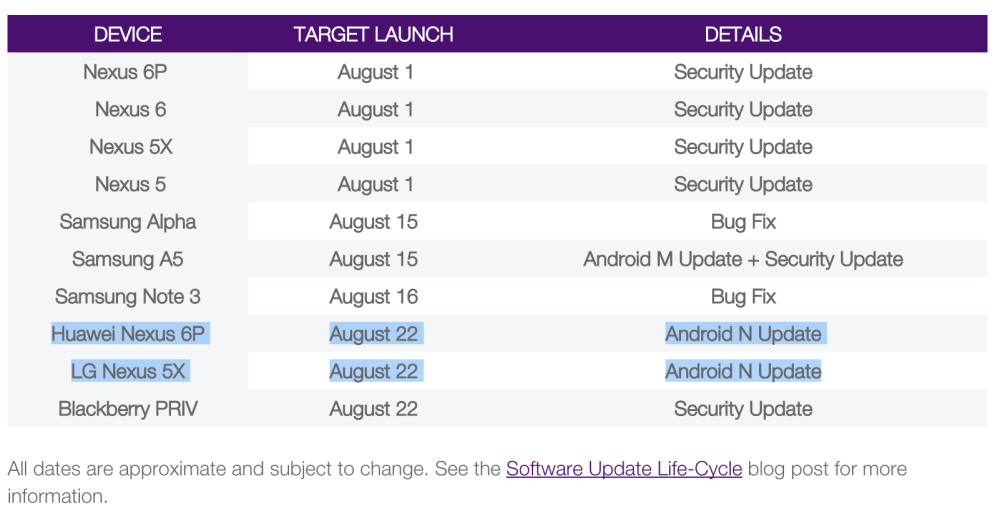