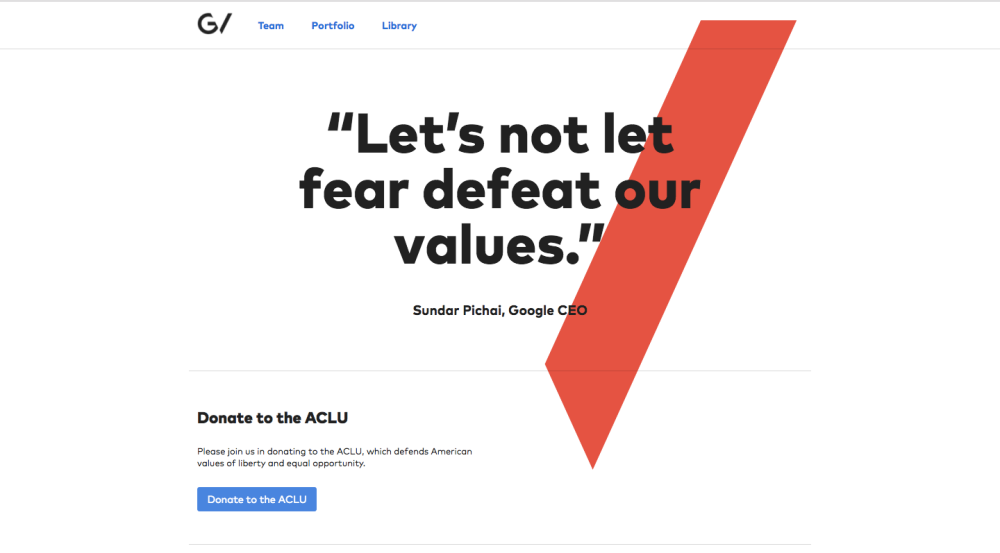 Following the company’s opposition to recent immigration orders put in place by the Trump administration, Alphabet’s venture capital arm, GV, is helping raise money for the American Civil Liberties Union on its website. Additionally, GV has reportedly made a “significant” donation to the organization, calling it the most important investment it will make this year.

As noted by Recode, you’ll now see a prompt on GV’s homepage to donate to the ACLU. “Please join us in donating to the ACLU, which defends American values of liberty and equal opportunity,” the prompt explains.

Taking up the majority of the page, however, is a quote from Google CEO Sundar Pichai that says, “Let’s not let fear defeat our values.” Clicking on the header quote takes you to a Medium post that Pichai write in December of 2015, describing his journey coming to the U.S. from India more than 20 years ago.

In the post, Pichai expressed concerns over the increasing intolerance toward immigrants and minorities. Here’s an excerpt from that 2015 post:

And it’s not just about opportunity. The open-mindedness, tolerance, and acceptance of new Americans is one of the country’s greatest strengths and most defining characteristics. And that is no coincidence — America, after all, was and is a country of immigrants.

Let’s not let fear defeat our values. We must support Muslim and other minority communities in the US and around the world.

The ACLU prompt on the GV, formerly known as Google Ventures, website comes following a handful of other efforts from Google and its employees to oppose the immigration executive order from President Trump.

While Pichai has publicly spoken out against the ruling,  Google employees have raised money and protested themselves. Additionally, Google is among a handful of companies behind a formal letter opposing the order.