Launched in 2013 with the Nexus 5 and later made available to all Android devices, the Google Now Launcher is being discontinued in the coming weeks, according to an email sent by a tipster to Android Police. Existing users will continue to receive support, while OEMs are encouraged to develop their own launchers that integrate a new library that allows for easy access to the Google Now stream…

This news comes via an email sent to OEM partners from the Android team. It details how the “Google Now Launcher will be unpublished” from the Play Store in Q1 of 2017 — which would mean within the next several weeks. Existing users will continue to receive support with updates via the Google app, but new downloads will no longer be available.

This change comes as Google has implemented a solution to allow all OEMs — and not just Sony — to natively access the Google Now stream/feed with a left swipe from the main home screen. After testing in 7.0 and 7.1, the Google Search Launcher Services library is officially “good for production use.” 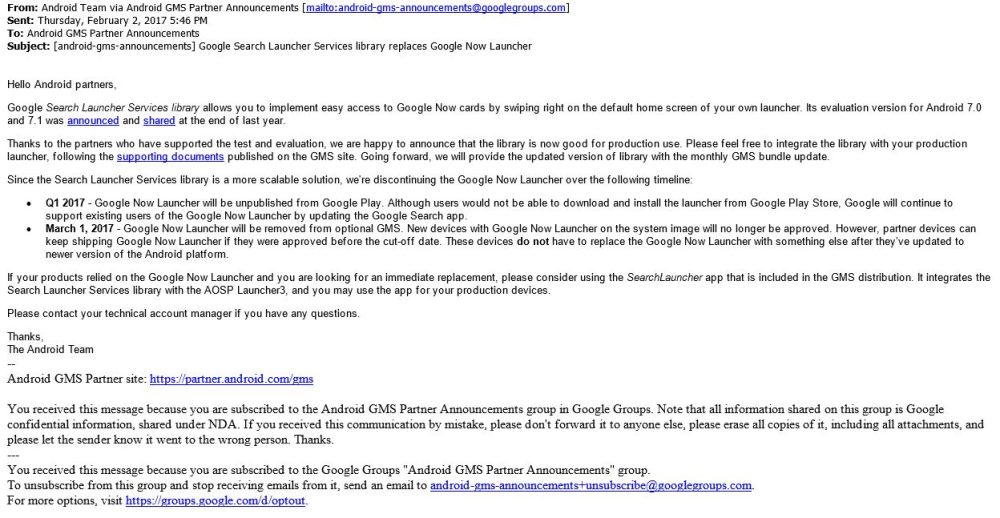 GNL will be removed from the list of optional software that OEMs can include in March. They are encouraged to build their own solutions taking advantage of the new library or continue using Launcher3. The latter can be found on Moto devices and very similar to the stock Google Now Launcher in functionality.

Going forward, Google is likely going to continue using the Pixel brand for their hardware and as such the Pixel Launcher should suffice. Existing Nexus users should continue to receive updates via the Google Search app.