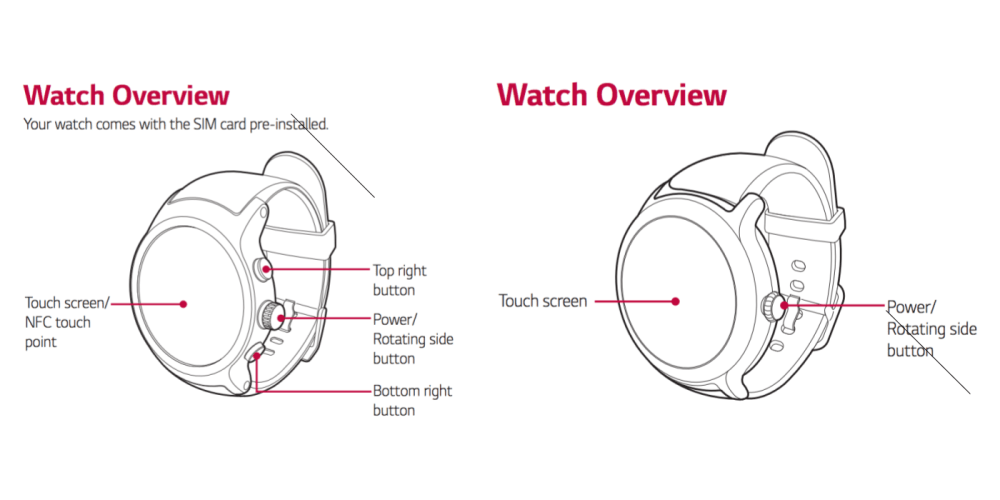 User guides for the LG Watch Sport and Watch Style have leaked (via Droid Life) ahead of the device’s rumored Wednesday launch. While lacking specs, other features like a rotating crown and USB-C charging dock have been revealed, as has Google Assistant on the watch.

The guides demonstrate that Google Assistant can be accessed by saying the “Ok Google” hotword or pressing and holding the power button until the familar “Hi, how can I help?” prompt appears. Functionality is not wildly different with the ability to send messages and emails, set alarms, reminders, and more.

On the hardware front, both watches will feature a rotating crown for scrolling through the apps list, notifications, and other messages. The Sport features two additional buttons that can be used to quickly launch Android Pay or the fitness app and can also be used as volume controls during a call.

With cellular connectivity, the Sport includes a removal tool to open the rear casing in order to replace the SIM card. As expected, the Style does not feature NFC, GPS, a heart rate sensor, or a barometer . Both charging cradles feature a USB-C port, with the Style’s being a flat puck, while the Sport’s is more similar to the Moto 360 and can be used as a stand.

Earlier today, retail packaging for the Style leaked featuring an interesting “Designed with our friends at Google” tagline. The Sport is expected to come in at $349, while the Style will be a $100 cheaper at $249.