Google is works on a number of different products and services, but no matter what project the company takes on, its biggest involvement is, and could always be, its search engine. Google Search has grown and matured quite a bit over the years with subtle improvements and new features, and it looks like Google’s latest venture with Search is to test out automatically-playing videos…

Jennifer Slegg first spotted this new addition a couple days ago, and Google then confirmed to Search Engine Land that it is in fact testing this out with select users that are part of a “small experiment.”

So, just how do these automatically-playing videos work?

When searching for a movie or TV show, you get your standard search results in addition to the knowledge panel on the right-hand side with more information about the title you’re looking for, including reviews, a short synopsis, and trailers. You normally need to click on the video to watch the related trailer, but if you’re part of the experiment that Google is testing, these videos will automatically begin playing on their own.

A Google spokesperson says the company has nothing to announce at this time:

We are constantly experimenting with ways to improve the search experience for our users, but have no plans to announce at this time.

Android Police notes that the feature isn’t just on desktop, however — if you’re using an Android phone with the latest Google app, you could notice the experiment there as well. We ourselves have been able to get a trailer for “Justice League” to play automatically using the Google app on the Pixel XL. There’s a new toggle in the Google app that allows you to completely disable the feature (Thanks, Dylan!). 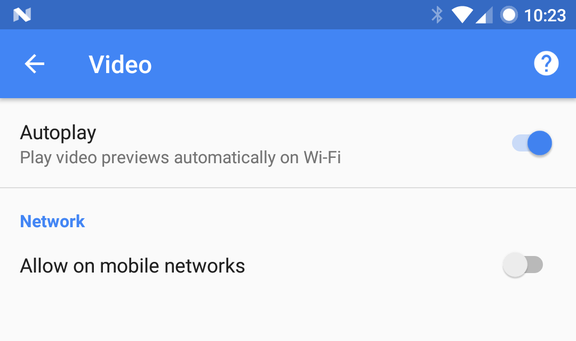 I’m all for new feature for Google Search, but auto-playing videos sounds like a very obtrusive component. Video content is one of the biggest things on the Internet, but most people don’t want to be forced to watch something without first giving their permission. There’s also the problem of data supply on mobile devices — people watching their megabit consumption might not want to have them drained automatically.

Google may never release this new feature to the masses, but even so, it’s interesting that the company would play with something like this in the first place. Aside from the occasional promoted search result, Google Search offers a clean and clutter-free way to find what you’re looking for on the Web. Should automatic video playback be released beyond a small experiment, Google will be stepping a many, many toes.