While Google’s Allo isn’t really for everyone, the company is certainly trying to bring more attention to the app. Between new features, grilled cheese food trucks, and Allo for Web, a lot has been done with the messaging service. Now, it’s been discovered that Allo for Web has a handy little hidden trick.

It’s unclear how long this has been a part of Allo for Web, but a Droid-Life reader recently spotted a feature within the service which alerts you when your phone’s battery is low. If you’ll recall, Allo for Web relies on a constant connection to your phone in order to work, so you won’t be able to use it if the battery dies.

Clearly, this feature is designed to keep the conversation going on Allo for Web by reminding the user to keep their phone topped off. It’s unclear what your battery level needs to fall to in order to trigger this, but it’s probably somewhere between 10%-20%. Regardless, it’s a handy little addition that shows Google is paying attention to the details. 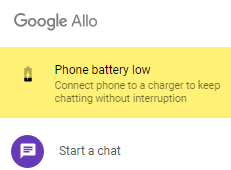