Waymo One launched late last year in Phoenix, Arizona as the first public self-driving car service. However, those rides still have a human safety driver behind the wheel that is ready to take over in case of emergencies. The Alphabet company is now getting ready to test “completely driverless Waymo cars.”

In an email (via The Verge), Waymo began informing members of its Early Rider program that upcoming rides might not have a “trained driver up front.” Despite launching the public service in Phoenix last year, Waymo still maintains a beta program where it tests new experiences.

Those riders will be the first to experience a “fully driverless car.” The Waymo One app will alert users when they are matched with such a vehicle and offers “What to expect” details.

The experience is advertised as a way to “enjoy having the car all to yourself.” With full self-driverless vehicles, the dedicated, in-car button to get help makes more sense. A “rider support agent” can also be reached from the app.

Rest assured, Waymo will still be taking care of you; this is just the next step as we travel down the road toward a fully self-driving future. Thank you for joining us on this journey! 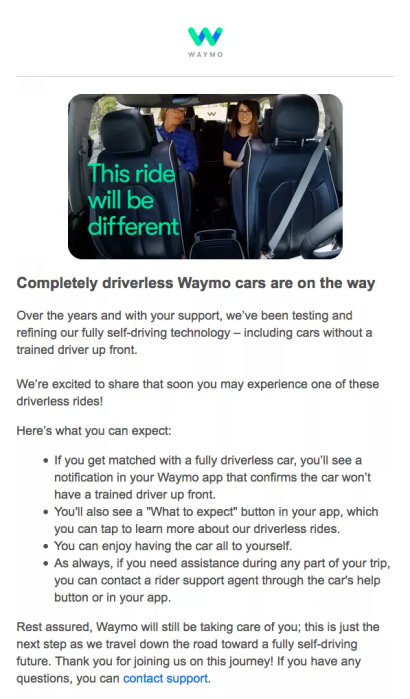 Ultimately, rolling out human-less vehicles helps Waymo reduce operating costs and better compete with the likes of Lyft and Uber. The email to testers did not specify exactly when these cars will come on the road.

In other Waymo developments, the company announced earlier this week that it will begin mapping parts of Los Angeles with cars that have humans driving. This will help determine whether to bring self-driving cars to the traffic-congested city.

Our cars will be in town exploring how Waymo’s tech might fit into LA’s dynamic transportation environment and complement the City’s innovative approach to transportation.