Review: Mecool’s KM3 Android TV box is only for the power user on a budget 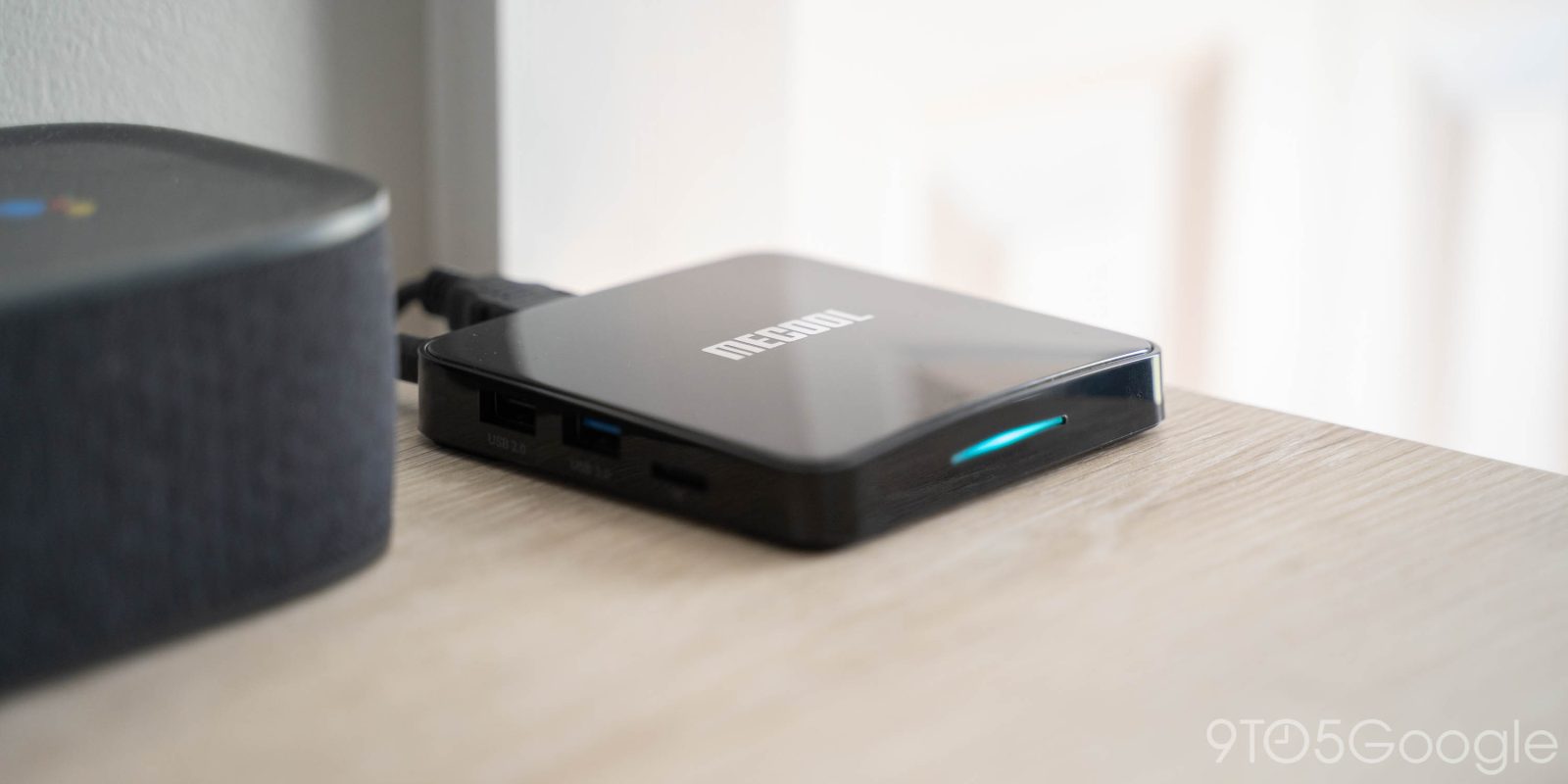 Media platforms have existed for your TV for years, but Android TV is perhaps one of the most powerful. It has more potential you can unlock compared to a Roku or an Apple TV, but a lot of that depends on the hardware available. “Power users” demand a lot of ports and capable specs, and the Mecool KM3 Android TV box delivers exactly that.

The physical design of the KM3 isn’t anything to write home about. It’s a simple box with a shiny plastic finish, metal bottom with holes for heat dissipation, a “breathing” LED on the front, and ports along the back and left sides. Those ports are the real story of the hardware here.

The back of the Mecool KM3 offers features an HDMI port, an Ethernet port (10/100m), and there’s also an audio jack. Along the side, two full-size USB ports (one 2.0, one 3.0), and a microSD card reader.  With those ports, you can easily connect a flash drive, external hard drive, or microSD card full of local media, no need for additional dongles or devices.

Under the hood, there’s an Amlogic S905X2 processor that is capable of delivering 4K video and HDR, and that’s paired with 4GB of RAM and up to 128GB of onboard storage. By contrast, Chromecast with Google TV has the same chipset, but half the RAM and only 8GB of storage. Even the Nvidia Shield TV Pro, which does have a higher end processor, only has 16GB of built-in storage. The base model, though, ships with 64GB. In either case, that’s plenty of space for apps and the ports leave tons of expansion for movies, music, and more.

Finally, let’s take a second to talk about the remote. It has a basic design with a D-Pad, navigation buttons, a Google Assistant button, and volume controls. It connects over Bluetooth and I had no complaints over the connection. It was rock solid through and through. I do wish, though, that there was at least one button for opening some app on the device. A customizable button would be killer considering who this box is for.

Capable specs that can do just about anything… except Netflix

Another important aspect of this device is its performance. The S905X2 chipset isn’t exactly a powerhouse, but with Android TV and 4GB of RAM, this package delivers more than enough power for just about anything, whether that’s running sideloaded apps not meant for Android TV or playing games. My typical use didn’t really push this machine to its limits, but I noticed in every app and in the interface as a whole that everything was much smoother and faster.

Android TV 10 is what you’ll find out of the box on Mecool KM3. There are no major customizations here outside of a handful of pre-loaded apps (Twitch, Tubi, Sideload Launcher). It’s the same experience you’d find on a Shield or Mi Box. The only thing that gives me reason to pause is the update tool. Mecool is using a custom tool instead of Google’s and historically speaking, that never works out well. This is a Google-certified box (which means Mecool has approval from Google to use the Play Store and Google’s apps), though, so that’s something to keep in mind.

It is nice, though, that Mecool pre-loads some apps that really suit its target audience. As mentioned, Sideload Launcher is installed and allows users to easily access and open sideloaded apps that aren’t directly designed for Android TV. Beyond that, there’s also file explorer and a movie player. They’re very basic, but they get the job done.

What might be the biggest deal breaker for most people is the lack of official Netflix support. You can run Disney+, HBO Max, Peacock, and even Prime Video on the KM3, but Netflix simply isn’t available because the device isn’t certified by Netflix despite being certified by Google. You can sideload the app, but it won’t play movies or shows back in anything beyond SD (480p). Shame.

The Mecool KM3 isn’t the first Android TV box I’d recommend to most people. However, for its sub-$100 price point, I think that people who want more out of their media streamer than just the basics, this is perhaps the best option in its price range. The Nvidia Shield TV Pro is what I think most people should buy if ports are the priority, but the simple fact is that $200 is a lot to spend on a set-top box.

If you’re buying into Android TV because you want to 1) sideload apps, 2) take advantage of external storage and peripherals, and 3) play local media, this Mecool box is a good way to do it while retaining a software interface that’s actually comfortable to use on the couch. I’d recommend the KM3 way before any of those generic “Android TV” boxes you find on Amazon (seriously, don’t buy those). This is proper Android TV with all of the advantages that come with that.

Most consumer-facing Android TV boxes don’t try to service any customer outside of the typical media streamer, the ones who use Netflix, YouTube, and the like. Mecool’s offering can deliver that experience, but it expands the package to include features that the “power user” wants: More ports and more storage. For half the price of a Shield TV Pro — between $70 and $90 depending on retailer — it’s worth a look if those are your priorities. You can buy the KM3 directly from Mecool (free keyboard remote during Black Friday), Walmart, Gearbest, and Aliexpress.