Back up your home’s power w/ Bluetti’s modular battery system, now hundreds off for Black Friday 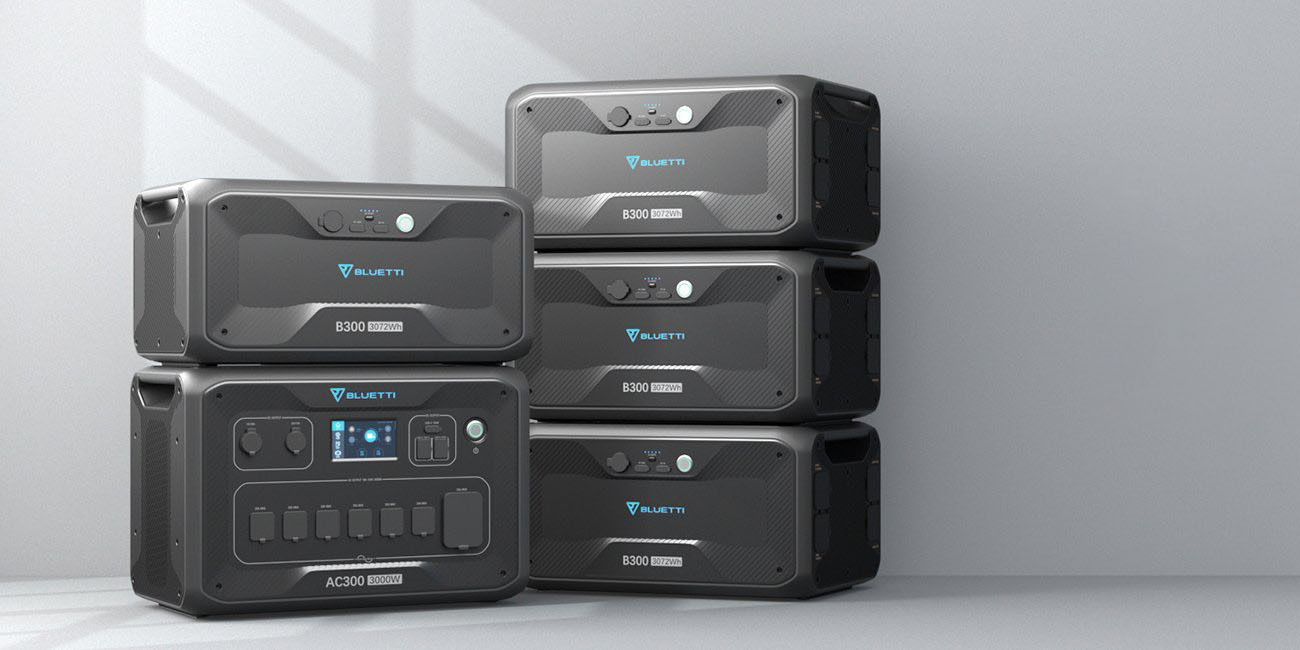 As power outages happen more frequently amid climate change, and work-from-home only becomes more popular, keeping the electricity flowing is important. Thanks to Bluetti, there’s an easy way to back up your home’s power, and for Black Friday, AC300 and other systems are on sale for hundreds of dollars off.

The Bluetti AC300 is one of the company’s latest and most advanced products, offering 3000W of output and a modular battery setup that can push up to 12,288Wh of power when combined with additional B300 batteries. For Black Friday, the AC300 with a single B300 battery is discounted by $700.

AC300 packs six standard AC outlets, one RV plug, five dedicated USB ports including one 100W USB-C port, as well as two Qi charging pads at the top of the unit. There are also two DC output ports with one 12V/30A and one 24V/10A. The system can put out a maximum of 3000W of power from all of these ports combined. You can connect up to four B300 batteries to maximize power capacity. At least one B300 pack is required to make the system work, as the AC300 doesn’t have any built-in battery cells.

For powering up the AC300 system, input can be handled by standard wall outlets, your EV’s charging station, or a solar array. The AC300 can handle up to 2,400W of solar input, enough to charge up a B300 battery in under two hours. Meanwhile, AC input can pull in as much as 3,000W.

On top of holding a ton of power, the AC300 can also push a lot of power to the appliances that need it most. The addition of the Fusion Box Pro brings two 120V/30A outlets and one 240V outlet. The company says this add-on can power appliances such as a washer/dryer, and it can also be used to double the power available from the AC300 with its battery add-ons. You can also set the system to act as an uninterruptible power supply (UPS) and connect the system and its massive battery storage to your home’s grid.

Altogether, this system can handle up to 24,576Wh of power with 6000W of output, enough to satisfy a family’s power needs for days in the event of an outage. Plus, you can manage your power remotely using Bluetti’s free app on iOS or Android.

Elsewhere in Bluetti’s lineup, several other systems are on sale including the AC200MAX, which is a more affordable 2000W system. Like the AC300, this system can connect to B300 and B230 battery add-ons and recharge using Bluetti’s PV120 and PV200 solar panels.

Bluetti is cutting $300 off the price of AC200MAX for Black Friday, and cutting $200 off the similarly specced AC200P. Further, Bluetti’s solar panels are also discounted by 20% for Black Friday, with PV120 and PV200 systems delivering 120W or 200W per array for speedy, off-grid recharging of your system.

Rounding out Bluetti’s Black Friday deals, you can score hundreds of dollars off the company’s more compact and portable batteries.

This includes the EB150 and EB240, which can output up to 1000W of power and charge devices with AC or DC power. Bluetti’s EB55 and EB70 deliver 700W of output while the AC50S, one of the brand’s most affordable offerings, can deliver 300W of portable power for working on the go.