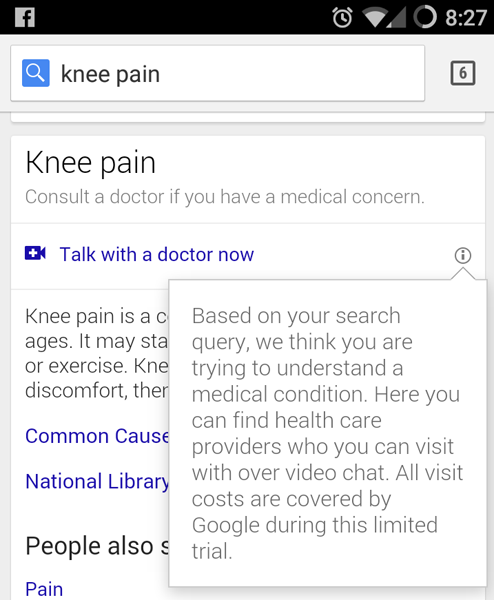 Google has confirmed to Engadget that it is trialling a feature which detects when someone is searching for symptoms of an illness, and proactively offers a video chat with a doctor.

The message states that “all costs are covered by Google during this limited trial,” suggesting that the service will be a paid one if and when it launches …  END_OF_DOCUMENT_TOKEN_TO_BE_REPLACED Have you ever wondered just how much being highlighted as a “Featured” application in any given category within the Android Market increases downloads for an app? According to one developer’s account, being featured could provide more than a 600 percent increase to daily average downloads.

The developer’s of the free fitness-tracking app “RunKeeper” were more than pleased to find out their app was featured in the Health and Fitness category of the Android Market. According to RunKeeper’s blog, the news came at midnight on New Year’s Eve, and three days later the app experienced a 637 percent increase in daily app downloads. It also catapulted from the mid 20s to No. 3 within the Health and Fitness category, and it currently ranks No. 288 in the Market as a whole.

According to Google Product Manager for Android Market Fernando Delgado, Google has a “team of editors and category managers that proactively look at new apps being released on Android Market. If an app is determined to have high potential, it is thoroughly reviewed to make sure it meets the high bar for being featured.” END_OF_DOCUMENT_TOKEN_TO_BE_REPLACED