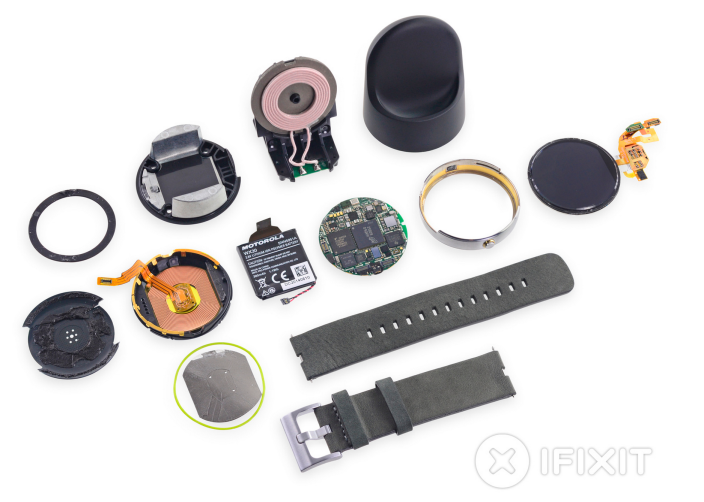 As always, our friends over at iFixit are fast at work tearing apart all of the new gadgets that were just launched and unveiled during IFA last week. Today they got their hands on Motorola’s new Android Wear-powered Moto 360 smartwatch giving us a first look at all the components inside the device. Unfortunately, it also found some issues with overall build quality and repairability that made for a less than perfect score:

Dumpster diving confirmed… the Moto 360 features a four-year-old TI OMAP3630. That’s the same processor we found in the Motorola Droid 2 four years ago, as well the big cheese that powered their MOTOACTV smartwatch back in 2011. Oh, and we also found a battery that fell a little short of its advertised spec.

As for other shortcomings that accounted for a 3 out of 10 repairability score, iFixit found some issues with advertised battery life vs what the device is actually capable of: Talk around the water cooler is that the Moto 360 suffers from an abysmal battery life. Motorola claims 320 mAh. Inside we find a 3.8 V, 300 mAh battery rated for 1.1 Wh of energy. We did some mathemagics, and 1.1 Wh / 3.8 V = 289 mAh, a full 10% less than advertised on Moto’s site. We’re not sure if that’s a rounding error or what; we just reports what we finds.

Other highlights (and lowlights) and a full list of components from iFixit is below:

• Motorola claims that the Moto 360 should fit any standard 22 mm wristband. That said, the included instructions warn us that replacing the band, or adjusting the metal band, requires “specialized tools” and the skills of a jeweler. But we had no trouble with our trusty tweezers.

• The Moto 360’s innards are sealed in tight. No easy point of entry and a rubber o-ring waterproof this oyster, but make opening the watch extra difficult. We suspect Motorola has a special tool for this job. For the rest of us, there’s the Jimmy.

• The motherboard assembly is loaded with five spring contact pads that line up with openings through the rear housing — perhaps an access point for programming, testing, or hardware hackers. (Just peel up the FCC sticker under your watch band, without disassembling your Moto 360, to access these pins).

• The Moto 360 is the first Android Wear smartwatch to feature an ambient light sensor (for an auto-dimming screen). To save space, Motorola built the sensor into the display assembly, which explains the black bar found on the bottom of the display.

Update: In response to the controversy surrounding the Moto 360’s battery capacity, Motorola issued a statement to the folks at ComputerWorld.

So, it looks like Motorola was just playing it safe with the figures listed on the Moto 360’s battery.