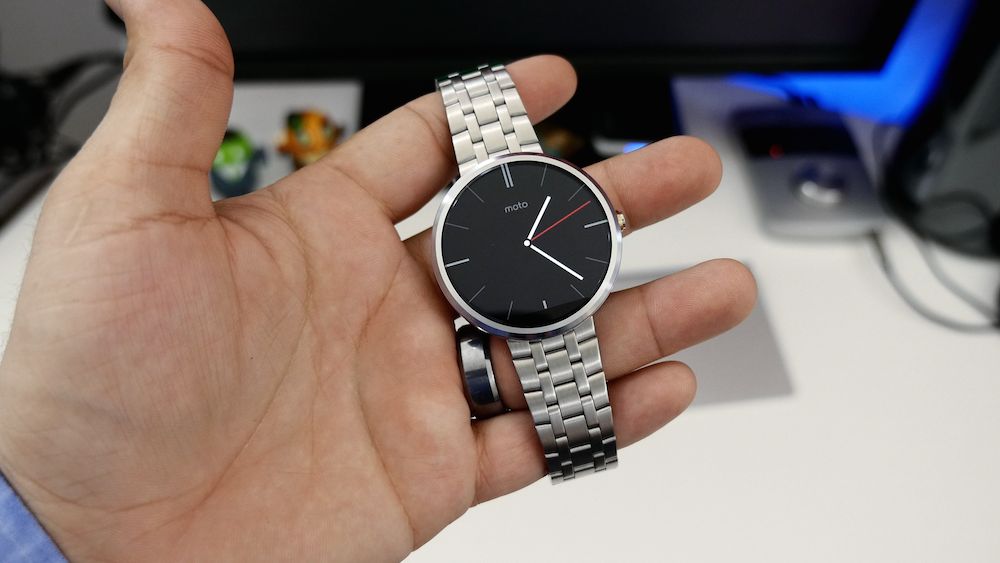 When the Moto 360 was released, it was very disappointing to find out that the steel band version would be launching at a later date. Unfortunately, we’re still without this mysterious steel version. Motorola has hyped the steel band version since the Moto 360’s announcement, but until its officially released your only option is to buy one that comes with a leather strap.

The gray and black Horween leather straps that come along with the Moto 360 are pretty good, but for myself, nothing is better than a nice steel band. The problem is, Motorola has somewhat of a proprietary design with the straps that ship with the Moto 360 and if you want to pickup an official steel band when it’s released, be ready to pay $79.99. Luckily, there’s one steel strap in the wild that just happens to fit it perfectly…

With the default Moto 360 bands, there are small slits at the top connecting end which corresponds with a protruding piece of plastic within each strap’s resting area. This prevents standard 22mm straps from properly fitting the Moto 360. I searched high and low trying to locate a strap that would fit these specifications, and just as I was about to give up, a friend recommended the Pebble Steel’s watch strap. To my surprise, it was a perfect fit.

Check out our Moto 360 steel band overview video below:

As shown in the video above, the Pebble Steel’s watch band is a perfect match for the Moto 360. The silver version of the strap looks excellent, though I can’t vouch for the color accuracy of the matte black Pebble Steel band when compared to the black Moto 360. The best part is, it’s not very difficult to locate replacement bands for the Pebble Steel. In fact, they are available for only $20 on Amazon.

Replacing the band on the Moto 360 is relatively easy. All you’ll need is a small flat-head screwdriver and about 10 minutes. For a closer look at the strap replacement process, check out the above video. In a nutshell, the Moto 360 features the same pins you’ll find on most watches and you’ll just need to use the flat-head screwdriver to compress the pin’s spring and remove the band. From there, just reverse the steps taken to remove the leather band and attach the steel one. For some, this may only be a temporary solution until the official standalone band is released for $79.99. Alternatively, you’ll eventually be able to purchase a version of the Moto 360 that comes with the steel band for $299. Either way, I think that the Pebble Steel band looks great with the silver Moto 360 and I have no plans to replace it with anything else.

Hopefully this article has helped end your search for the perfect steel band for the Moto 360. Also, don’t forget to check out our Moto 360 review. Let us know what you think in the comments. Have you found any other bands that look nice with the Moto 360?