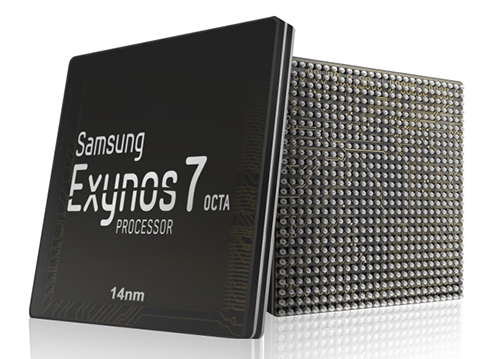 Samsung this morning has taken the wraps off of a new octa-core Exynos processor that is widely expected to be the processor used in the upcoming Galaxy S6 flagship. Samsung says that the Exynos 7 processor is built on a 14nm processor and has eight cores. The company touts that it is “designed for next-generation flagships.”

The Exynos 7, according to a blog post from Samsung, offers a 20 percent improvement in performance over previous generation processors, as well as a “productivity increase” of 30 percent. Perhaps most importantly, the Exynos 7 processor reduces power consumption by 35 percent, which should make for significantly improved battery life.

Samsung was originally expected to use the Snapdragon 810 processor in its upcoming Galaxy S6 flagship, but as we’ve reported before, the Qualcomm chip has been plagued by overheating issues. Qualcomm itself has acknowledged that its processor was dropped from a major flagship device due out later this quarter.

Other rumored specifications of the Galaxy S6 include Android 5.0, an all-new design, a qHD Super AMOLED display, 3GB of RAM, and a 20MP camera. Alongside the standard variant, Samsung is also believed to release the Galaxy S6 Edge.

Samsung is expected to unveil the Galaxy S6 on March 1st at Mobile World Congress in Barcelona. We’ll have full coverage of that event when it happens.