HTC One M9 review: Steps in the right direction, but enough to keep up? (Video) 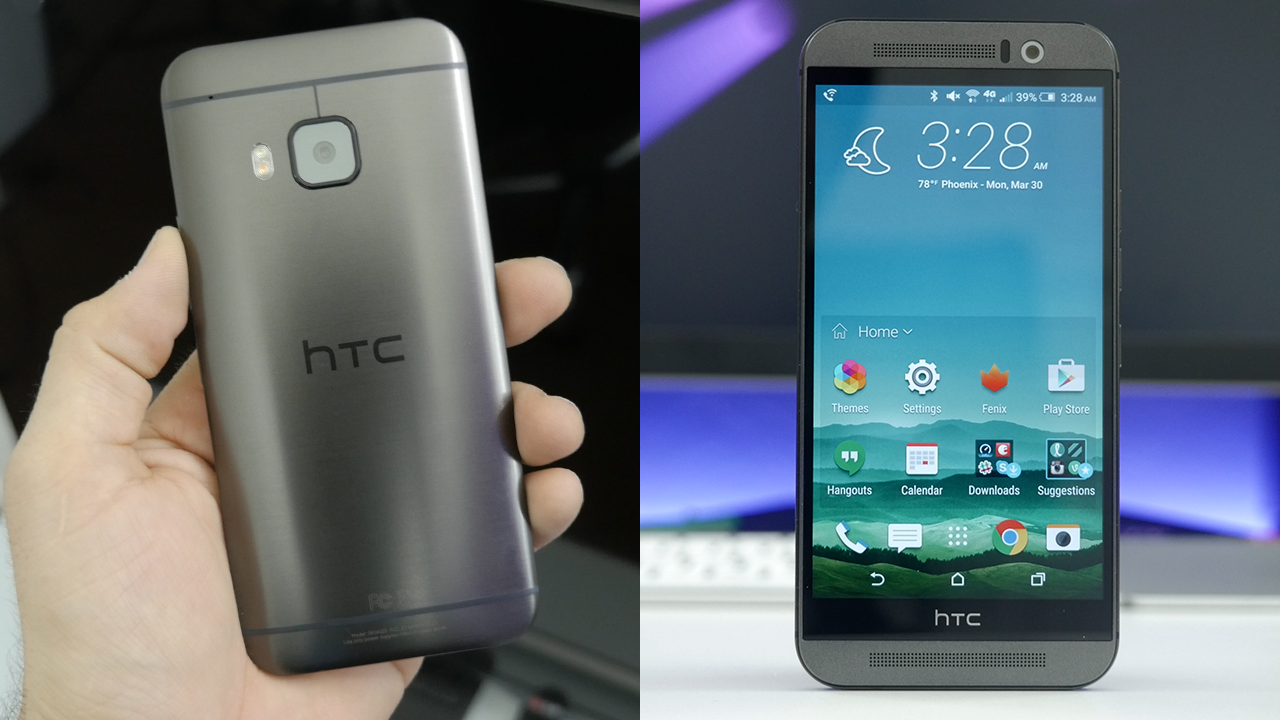 Another year has passed and HTC’s latest flagship is here at last, but does it live up to the hype? This year we have a very familiar design and changes that will hopefully alter the future of the One lineup for the better. If you’re looking into upgrading to the One M9, pause that idea and check out our review (video above) to find out if it’s a worthy purchase…

As you can probably tell, there’s not much of a difference in design when compared to the M9’s predecessor. Everything looks nearly identical, but there are small details that solidify this flagship as an upgrade. In my opinion, there are only a handful of important things to discuss with the One M9: Design, camera performance, specifications, and software.

First off, as mentioned the design is nearly the same as last year’s model. Some people were disappointed in this choice by HTC, but I’m really not opposed to it. The One M8 was a very well built smartphone, possibly the best built of 2014, and the M9 continues this legacy. That’s perfectly fine in my book. There are a few minor differences in the design we should discuss though. 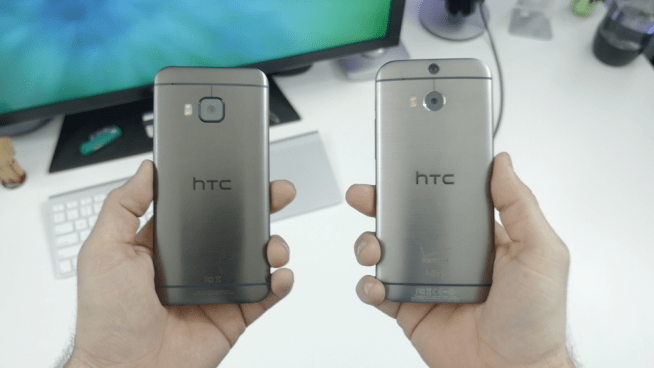 When compared the M9 to the M8, you get a greater sense of grip this time around. the sharp edges along the front side provide sheer satisfaction in the hand and for whatever reason, doesn’t seem to slip as much. In addition to that, the M9 is slightly thicker and only millimeters shorter than the M8. The gunmetal look here is a shade darker as well, but I definitely prefer it to the gunmetal variation from last year.

Across the front of the device, we have HTC’s famous front-facing stereo BoomSound speakers. To my ears, they sound the same as last year, but that still means you’re getting the best media experience on a smartphone from an audio perspective. Nothing comes close to them in the mobile space yet. 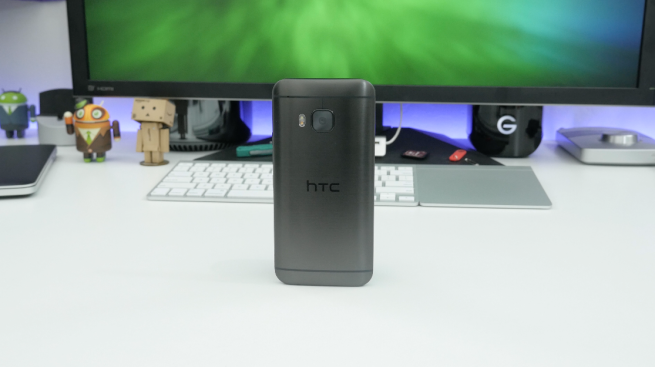 The display has remained the same this year, which isn’t as much as a disappointment as it sounds. I love the display. At 5-inches diagonally with a resolution of 1,920 x 1,080, this display is crisp and clear. It may be the same as last year’s model, but with a pixel density of 441 ppi it’s still great. While everyone else is producing 1440p displays at the cost of battery life and possible performance in some cases, HTC played it safe with an already solid option that still looks just as good as other smartphones.

HTC has finally relocated it’s lock/power button this time around and it can now be found below the two volume buttons. Pretty cool upon first inspection, but there’s more crucial details to explain here. I’m a big fan of the volume buttons actually being two separate buttons when compared to the volume rocker on the M8, but I’m not a fan of the lock button placement.

The problem is that the lock button is below the two volume buttons. It sounds good initially (at least better than being hard to reach on the top of the device), but it’s in a very awkward place for your thumb. Maybe this depends on your hand size, but for me it was often difficult to locate. The button is textured, so feeling out it’s location isn’t a problem, but at the same time I don’t want to have to feel out the button every time I need it. 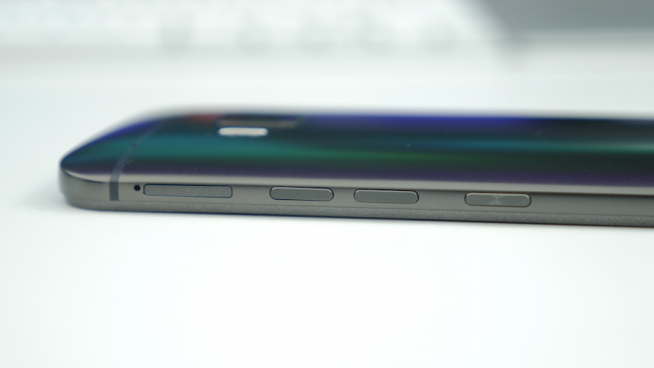 HTC’s gestures are still present, so you can easily double tap to wake the screen and unlock the device. I guess that works if you’re bothered by the lock button placement, but I’d rather it be on the top or relocated so it’s near the SIM card slot on the other side. That would have been an ideal place for it.

The IR blaster is still present along the top side and on the bottom you’ll find the headphone jack and Micro USB port. Around the back, you’ll find a new 20-megapixel camera which replaces the M8’s UltraPixel camera and slightly changes the design as well, but we’ll talk about camera quality in a little bit. HTC has removed the Duo Camera from the back as found on the M8, but I’m not really bothered by this change. I never found it to be an important feature.

As mentioned, HTC swapped out the UltraPixel camera that was introduced with the M8 and replaced it with a 20-megapixel sensor. For all of you fans out there, you’ll still find UltraPixel goodness on the front side though. It’s much better as a low-light selfie camera, but does the new rear sensor perform as great as its megapixel count would suggest? Megapixels certainly aren’t everything to consider, but with 20 of them, there should be a clear advantage here. The camera is also joined by a dual-tone  LED flash which is nothing new.

HTC has implemented a lot of software features within the camera app that will allow you to touchup and add effects to your photos. There’s nothing groundbreaking in this department, but the filters and cool effects are fun to play with and I’m sure a lot of people will enjoy them. Unfortunately, there aren’t going to be enough effects to fix the photos you’ve taken. 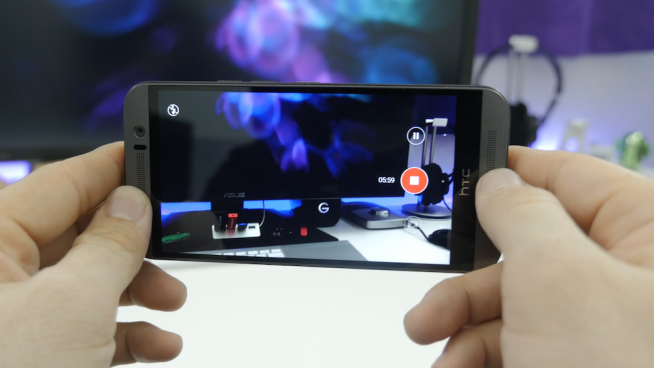 In short, the camera isn’t great. I really wanted to like this camera. When this device was first announced and the upgraded camera specifications were mentioned, I wanted to jump out of my seat. Over the last week, I’ve put the camera through its paces and the results seem to be somewhat of a mixed bag.

There’s zero consistency with the One M9’s camera. Sometimes the photos are overexposed and sometimes under, while every once in a while it’ll take a decent picture. I take a lot of pictures with smartphones and found it hard to snap a good photo with this camera. It’s definitely not at the level that a 2015 flagship should be. The colors are washed out, exposure is all over the place, it’s sometimes difficult to focus, and in low light it’s extremely hard to obtain focus on a subject.

I’m not here to completely trash the camera, but as I said this just isn’t good. Hopefully, most of the issues are software related and can be updated in the future, but the gallery below is solid proof that megapixels aren’t as important as smartphone makers would like you to think. The One M9’s camera also shoots up to UHD video quality, but with the lack of any kind of stabilization at that resolution you’re better off shooting in Full HD instead. For a sample of the camera performance, check out our review video.

With the One M9, its software is where you’ll find some of the biggest changes HTC has made this year. This device ships with Lollipop running HTC’s Sense 7.0 overlay and there are a few noteworthy features to discuss. First off, HTC has implemented very extensive theming capabilities which I’ve definitely grown to love. Customize the One M9 with themes.

HTC’s Sense 7 looks very similar to Sense 6. There are some software tweaks here and there, but this could almost be Sense 6.5. HTC’s new Sense Home widget is a nice addition here. This widget works by showing you different types of apps depending on your location. For example, if you’re at home the apps shown will be different than if you’re at work. The widget will begin to learn your habits and remember apps you’ve used while at certain places and it does a pretty good job.

Sense 7 allows you to change quite a bit within the user interface. There’s a theme market with a wide selection available as well. You can download full themes, icon packs, sounds, fonts, and even customize the user interface colors based on preference or have it automatically match your wallpaper. If the available choices don’t suit your needs, HTC has put together a web-based theme creator called Theme Maker that will allow you to completely customize your own theme. 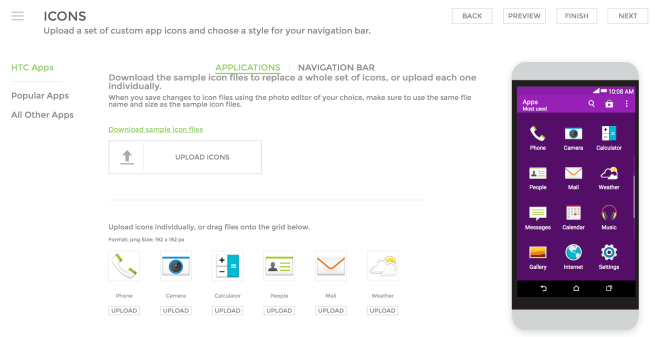 I’m not a huge fan of the Sense look, so I jumped online and fired up HTC’s Theme Maker to create my own. I replaced all of the stock icons with Lollipop icons, added a wallpaper, customized the colors, font, dialer, keyboard, and navigation bar. I was very impressed by how well it was put together, but it is necessary? Probably not, but I’m sure a good amount of people will enjoy the ability to create their own themes. I certainly did. Once you’ve created a theme, you can choose to publish it or keep it private where it can be found in the Theme app listed under your personal creations.

Performance on the M9 is great. The user interface is snappy and the hardware inside is definitely being put to work. You can feel it. Literally, the heat does start to build up on this device on even the simplest of tasks, but I wouldn’t call it “overheating.” It does get a little warm though, but hopefully that can be fixed with a firmware update down the road. As an example, the One M9 gets much warmer than its predecessor performing the exact same tasks. It’s not uncomfortably warm, but much warmer than other smartphones I’ve tested.

Gaming, videos, music, movies, and everything else you can imagine is a joy on the M9. There’s honestly not a lot to talk about in this department. This phone definitely performs (while a little warm at times), but I’d expect no less from a 2015 flagship.

While the battery life will last you through the day with average use, I found on heavier days it would drain very quickly. Certainly not a deal breaker, but you can expect a full day with regular use. That being said, I haven’t had this device long enough to test it’s long term battery performance. Battery life has been roughly the same as the One M8, but it’s not as good as other smartphones we’ve tested.

Overall, the people at HTC did what they thought was best for their 2015 flagship smartphone. Will it please everyone? Nope. I’ve always said, if it ain’t broke don’t fix it. Unfortunately, HTC didn’t fix everything that was broken with the One M8. This seems to be a pattern with HTC’s flagship. We have a solid build, top notch specifications, good software features, but there’s always a few major shortcomings in other areas including the camera.

HTC’s One M9 is a solid smartphone and I’m sure most people will enjoy it. However, it does have a few issues that are going to be important deciding factors to some. If you’re looking for a new smartphone and happen to like the One M9’s design and software, you may want to take a look at the now cheaper One M8.

Sure, it came out a year ago, but it’s still a solid choice with an identical build, great display, and substandard camera. I appreciate what HTC has done this year, but the One M9 may need a little more work in key areas before it’s ready for prime time. There’s a lot to love about this device, but once again there were some obvious sacrifices made.