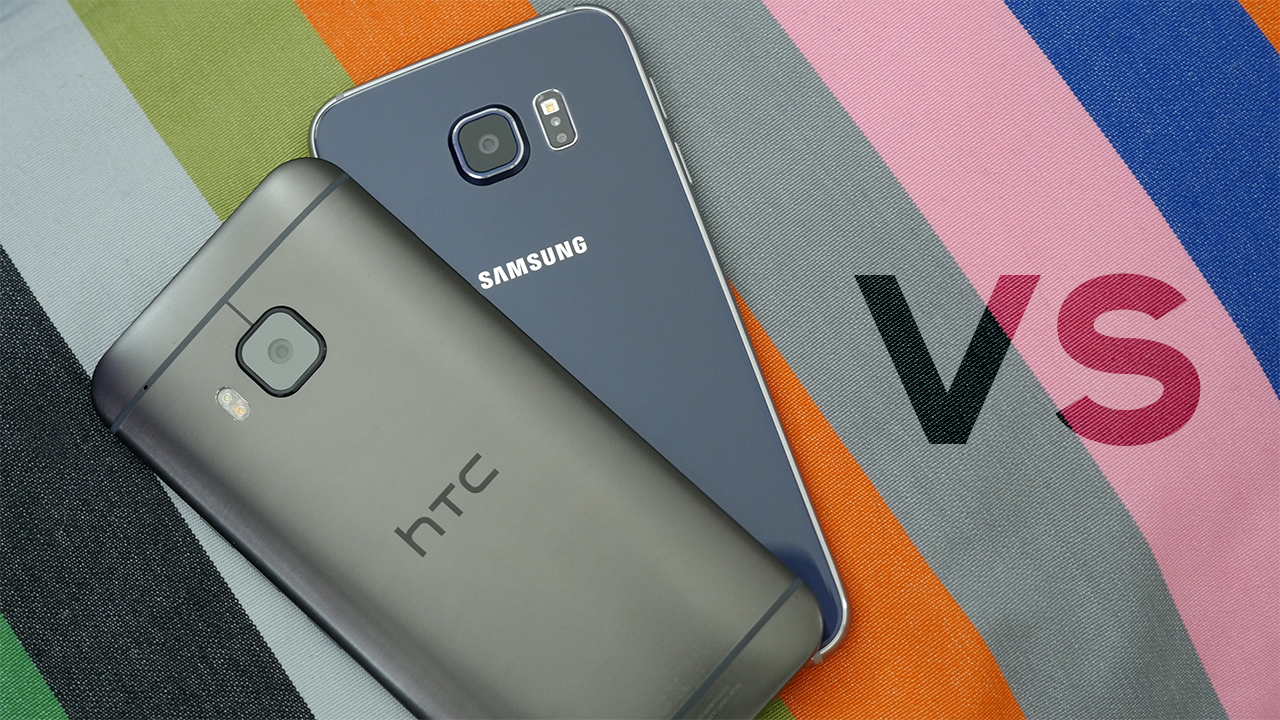 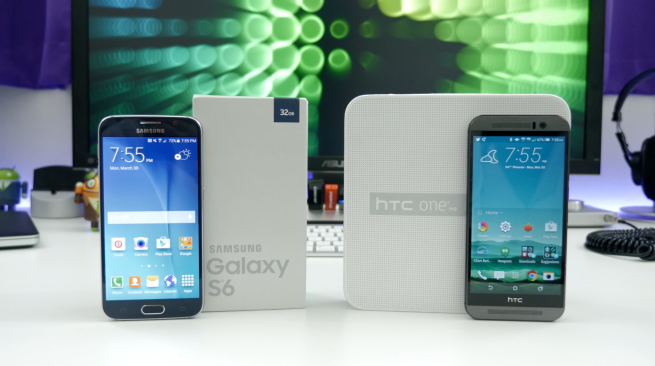 Today we’re taking a look at two of the latest Android flagship smartphones to hit the market. Samsung’s Galaxy S6 and HTC’s One M9 are in a tough battle to the top, but which one will win the fight? Well, let’s go ahead and find out…

This comparison will be split up into four categories: Hardware, design, software, and camera performance.

Benchmarks between these two devices are comparable, but it looks like Samsung’s configuration comes out on top with slightly higher scores across this board. Keep in mind though, these differences are minor and both devices are very snappy on the software side of things.

Check out our Galaxy S6 vs One M9 ultimate comparison video below:

When it comes to the hardware and design between these two devices, there are a lot of notable differences. HTC took the safe road this year and used last year’s all metal design, but that’s not necessarily a bad thing. Around the front side you’ll find HTC’s front-facing BoomSound stereo speakers, one of which hides the earpiece and LED notification light, a 4 megapixel UltraPixel camera, and when powered on, on screen navigation buttons.

On the left you’ll find the SIM card slot, while the right side features its Micro SD card slot, volume buttons, and lock button. The top end is home to an IR blaster which can be used with the included Peel Smart Remote app and the bottom features a 3.5mm headphone jack and Micro USB port. Around the back side of the M9, we have a 20.7 megapixel camera, dual-tone LED flash, and the HTC branding. 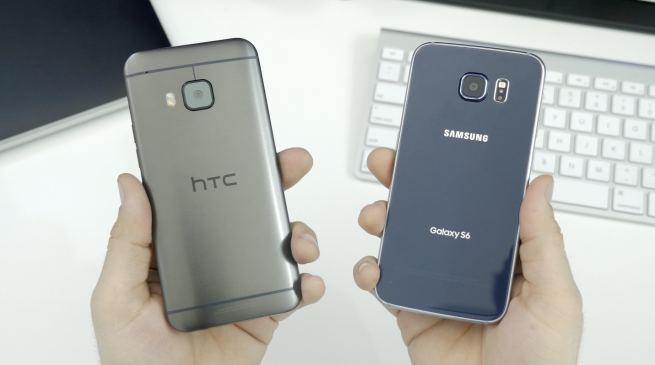 This year Samsung completely refreshed its Galaxy S line. The device looks very different from its predecessor. Samsung ditched the plastic design and went with metal and glass. The back and front sides are covered with Gorilla Glass 4, while the frame is made from solid metal with light chamfered edges all around. The front side is home to a 5 megapixel camera, earpiece, LED notification light, capacitive navigation buttons, and the home button with a revamped fingerprint sensor.

On the left side we have a pair of volume buttons, while the right side is home to its lock button and SIM card tray. The top has an IR blaster that can also be used with the Peel Smart Remote found in the app drawer and on the bottom you’ll find the headphone jack, Micro USB port, and a small mono speaker. The back features a 16 megapixel camera with optical image stabilization, LED flash, heart rate sensor, along with Samsung and Galaxy branding. Also new to the Galaxy S6 is built-in wireless charging. 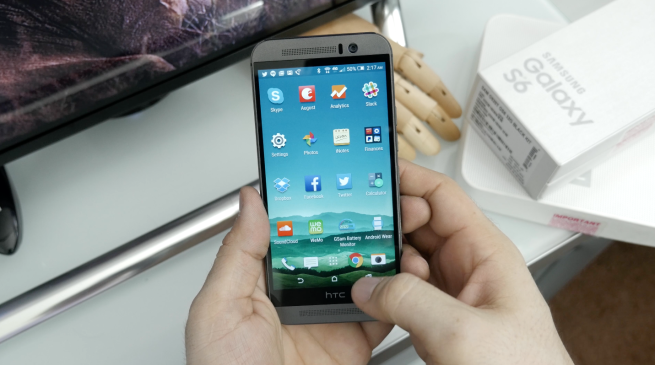 Moving along to software, both of these devices are running Android Lollipop, but with very different characteristics. On the One M9 we have HTC’s Sense 7.0 overlay which brings a handful of features to the table. First off, HTC has added the ability to create and apply custom themes. There’s even a theme store available with a wide selection. If you’re not a fan of the default user interface, you’ll be able to change out its icons, colors, and more using the available theme options.

We also have BlinkFeed which lives to the far left of the home screens and will provide you with up-to-date news, social status updates, and information based on your social networks and interests. If you’re not into blink feed, it can easily be disabled within the home screen settings. 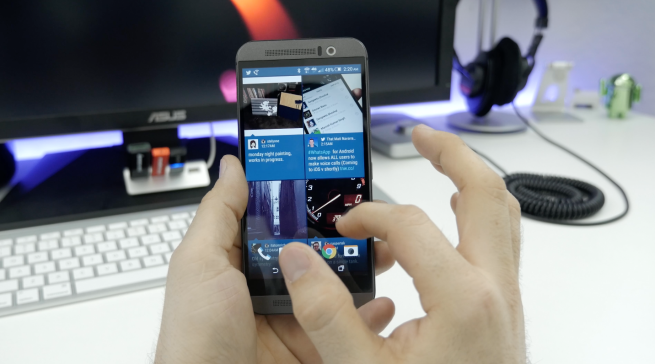 HTC has implemented a new Sense Home widget for location-based app suggestions. It works by showing you different types of apps depending on your location. For example, if you’re at home the apps shown will be different than if you’re at work. The widget will begin to learn your habits and remember apps you’ve used while at certain places and it does a pretty good job.

There are several other tweaks and adjustments being made with Sense this year and overall the design is clean and friendly. Software animations are fluid and navigation shouldn’t be an issue regardless of which Android device you’re used to. All of the modifications and customization options for the M9 can be found within the Settings app on the device. Overall, Sense is a smooth Android skin with a lot of personalization options this time around. 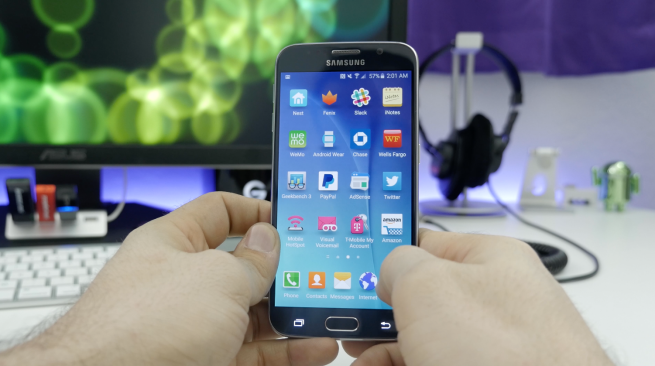 Over on the Galaxy S6, you’ll find a completely different software experience. This device also runs Lollipop, but with Samsung’s TouchWiz Android skin. There’s a lot of change happening this time around. Of course, long-term performance can’t be determined immediately, but TouchWiz seems to be slightly toned down and runs like a champ on the Galaxy S6.

TouchWiz does look similar to previous iterations, but the differences are found in the details. The Galaxy S6 also features new themes, but at launch there are fewer options available than on the One M9. Speaking of personalization, the Galaxy S6 also allows you to change the grid size of your home screen layout. The included options are 4 x 4, 4 x 5, or 5 x 5 and it’s nice to see this level of customization within TouchWiz finally. Some animations are a bit slower than with HTC’s Android skin, but overall everything is very fluid and easily navigated. 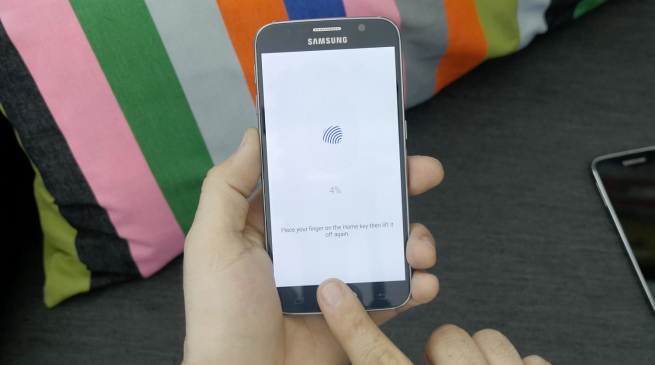 To the left of the home screens you’ll find Samsung’s Flipboard-powered Briefing section. This will act as a central hub for any news you may be interested in. Categories can be selected within its settings and allow you to choose from a set number of topics and sub categories for each topic. Like BlinkFeed, if you’re not into Briefing it can be disabled within the home screen settings.

The Galaxy S6 also features a revamped fingerprint sensor located within its home button. This is a major improvement over the one found on its predecessor in every way. Fingerprints can be added within the Settings app and the process is simple and easy to do. Unlocking the device with a fingerprint is very speedy this time around. Once set up, simply place your finger on top of the home button to unlock the device.

Camera quality between these two devices, may be somewhat subjective depending on the user, but keep in mind that megapixels aren’t everything. Samsung’s 16 megapixel camera features optical image stabilization, while HTC’s One M9 packs a 20.7 megapixel sensor. If you’d like to know more about my opinions on each of these camera, check out the two reviews linked in the description. All of these photos were shot on the same day under the same conditions. Which camera do you think is better? Let me know with a comment below.

Low light performance between these two devices reveals noticeable differences in the camera quality, but I’ll let you be the judge of that. I found that with the One M9, it was harder to snap a decent shot. It has some exposure and focusing issues along with the lack of optical image stabilization, so it took a little longer to take each picture than I experienced with the Galaxy S6. The front facing camera on each device also works well, but there’s really nothing special about either of them. 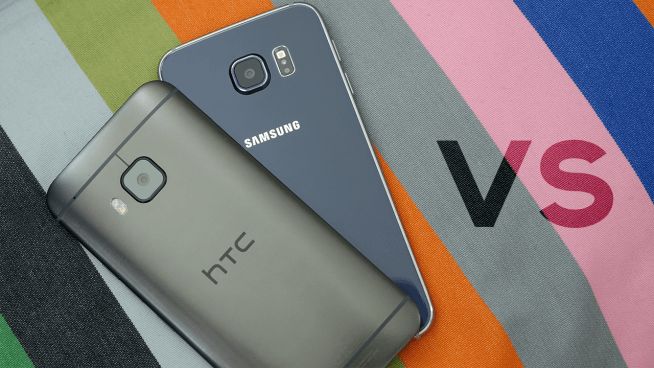 It’s hard to give you a solid answer as to which one of these 2015 flagships is right for you. Both offer their own special features that will fit different types of people. Each device has a very solid build quality, snappy software, and flagship specifications, but which one do you prefer?

That being said, there are some other facts you should consider. Feel free to check out our HTC One M9 review or Samsung Galaxy S6 unboxing and mini review to find out what we think about these 2015 flagship smartphones. Drop us a comment with your thoughts as well.