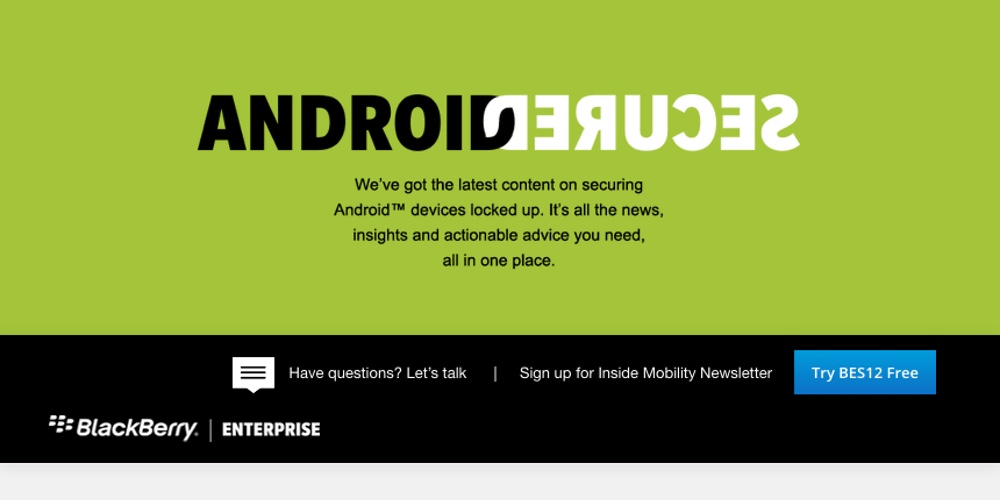 The internet got more than a little excited about BlackBerry buying up a couple of Android-related domains a few weeks ago. Although they came at a time when rumors of an Android-powered BlackBerry smartphone were floating around, turns out they’re nothing to do with that. As was always the more likely scenario, BlackBerry has used these domains to show us how it keeps our Android phones secure through its BES12 enterprise management system.

In a blog post today, BlackBerry has announced Android Secured, a dedicated web space for keeping customers up to date on the management and security of Android phones. The new Android Secured hub can be found at www.manageandroid.com.

To that end we’ve recently launched the Android Secured hub for fresh news and updates on all things Android security and Android management. Check it out and be sure to visit again soon as we curate the top articles and stories that will keep you on the cutting edge.

From just skimming over it quickly, it appears to be a collation of various articles and videos from across the web which BlackBerry thinks is important to share with its enterprise customers. There is some BlackBerry-created content too, like an eBook on enterprise mobile security (for example). This is undoubtedly a push to reaffirm the company’s relevance in a market where so many people now want to bring their own phones to work. And where companies don’t necessarily want to fork out for an iPhone.

This doesn’t necessarily mean we won’t see a BlackBerry Android device. The manufacturer’s own chief, John Chen said the company might as long as they can make it secure. What’s more, there have been supposed leaks of a BlackBerry ‘Venice’ portrait-slider which may or may not be on its way.