Remember when we reported that Google’s Chrome browser may soon get the ability to check a word’s spelling in multiple languages simultaneously? That functionality now works, and it’s live now in a pre-release build of the browser.

When we first spotted code for the feature in release notes for Chrome Canary, a “developer channel” build of the browser with changes not yet ready to be downloaded by the masses, only the user interface was there — it didn’t actually do anything once enabled. Now it does however, and you can add as many languages to be checked for spelling errors as your heart desires. 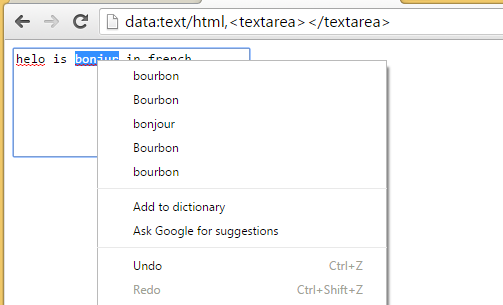 Unfortunately for users of Mac OS X, it doesn’t look like you’ll be receiving this feature — at least, not any time soon. Chrome on OS X uses the built-in language dictionary and has its own multilingual spellcheck, although it’s not really simultaneous in the same way and has been panned as being not-so-great. Native simultaneous multilingual spellcheck is live now in Chrome Canary version 46 for Windows, Linux, and Chrome OS.

OS X users aren’t completely in the dark, however, as this build of the browser also includes changes that are resulting in significant speed gains for Mac users, according to The Next Web. Here’s some of what they’re reporting on that front:

The Chromium team has been working to improve Mac graphics performance over the last few months and has begun testing its fixes, along with focusing on major memory leaks in the browser.

It’s also experimenting with tab discarding in the background which puts unused tabs to sleep if memory runs low.

Javascript performance also appears to have been a major factor. The V8 team has significantly improved its garbage collection process noting that it’s seeing a 45 percent improvement in memory performance on Gmail’s site — that’s also just starting to land in Canary and Dev now.

Enabling multilingual spellcheck on supported platforms is easy. With Chrome Canary installed, start by visiting chrome://flags/#enable-multilingual-spellchecker and clicking “Enable.” Then visit chrome://settings/languages, add new languages in the left-hand section of the modal, and finally check “Use this language for spell checking. ”

This feature should come in handy for those among us who are fluent in multiple languages and have a habit of using them interchangeably. Keep in mind, however, that multilingual spellchecking is still in early development and the UI and/or functionality could change significantly before it’s released to the public.