Many manufacturers have committed to keeping up with the monthly security patches being released by Google. The move came after a major security threat, dubbed ‘Stagefright’ was discovered a few months ago. Among them, Samsung stated that it would release security updates to its high-end devices. Up until now, however, you haven’t been able to see how up-to-date the security is on your Samsung flagship.

In its latest round of firmware updates, Samsung has updated the ‘About Phone’ section within the settings menu to show when the last security patch was delivered. Spotted by Android Central, the Galaxy S6 Edge+ builds in Europe and Galaxy Note 5 builds in the Middle East are seeing this new information. The builds specifically mentioned are G928FXXS2AOK9 for the S6 Edge+ and N920CXXU2AOK6 for the Note 5.

Like in Android Marshmallow, the new Lollipop firmware on these Samsung phones shows a new field with the label, ‘Android security patch level’, followed by the date when it last received a security update. If you have recently downloaded a new version of firmware, you can check for yourself by heading to Settings, scrolling down to ‘About Phone’ and the new security patch level field could be there. 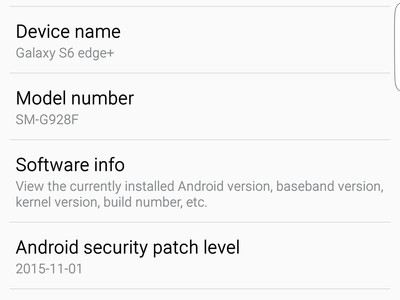 Up until now, Android Marshmallow was the only software which showed how up-to-date security is on a particular device. This development could signal a couple of things: Either Google has mandated that manufacturers need to start showing this information, or that Samsung is genuinely attempting to keep users in the loop, and being transparent about its software delivery. Either way, this can only be a good thing.